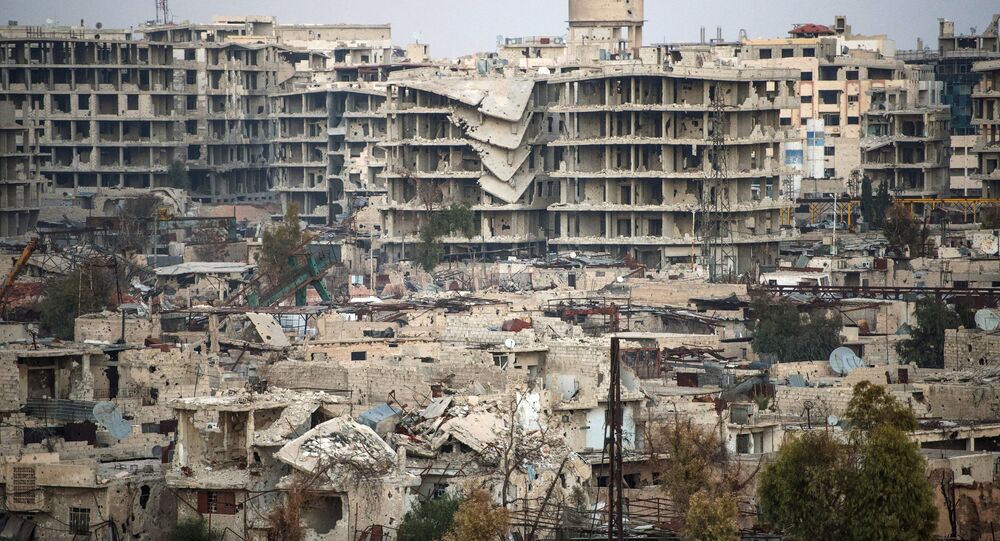 Amnesty International's report on the mass torture and execution of prisoners by Syrian security forces at Saydnaya Prison just outside Damascus is notable for the lack of concrete evidence it provides in support of what are serious allegations of war crimes.

This is not to assert that no atrocities have been taking place at this prison facility, or by Syrian security forces elsewhere. How could anyone assert such a thing without concrete evidence in support of it? But, equally, the assertion that such atrocities have and are taking place likewise requires concrete evidence in order to authenticate them.

And said concrete evidence, as mentioned, is completely absent from the Amnesty report.

It is a report that has been largely compiled on the basis of testimony from anonymous sources and witnesses, and would not as a consequence be admissible in any court of law — at least not one set up with the objective of discharging justice.

When Carl von Clausewitz opined that war is politics by other means, he identified the salient fact that war and politics are two sides of the same coin. Winston Churchill did the same in stating:

"In wartime, truth is so precious that she must always be attended by a bodyguard of lies."

This is especially the case when it comes to the 9/11 wars, of which Syria is the latest most brutal and merciless instalment — i.e. those wars that have erupted in the wake of the terrorist atrocity carried out against the US in 2001. A rendering of those wars — Afghanistan, Iraq, Libya, and Syria — leaves no doubt of the role that disinformation, faulty or concocted intelligence, and blatant lies have played when it comes to the West's strategic objective of effecting regime change.

The brutal nature of the conflict in Syria is beyond dispute. Indeed, the level of brutality it has unleashed is almost sui generis in its medieval character. It has pitted a conscript army of soldiers from every part of the mosaic that is Syria's secular society, against an atavistic sectarian ideology that embraces the wholesale slaughter of the country's minorities, employing mass and ritual beheadings, burning people alive, throwing people from the top of tall buildings, enslaving and selling woman as sex slaves, and instructing its followers to carry out indiscriminate terrorist attacks in the West.

As such, the stakes involved in the outcome of the conflict could not be higher — not only for Syria, its minorities, women, and those who do not subscribe to the medieval ideology that predominates the opposition, but also for the entire region and, indeed, wider world given the proliferation of terrorism that has emanated from the region.

The Conflict in Syria Does Not Exist in a Vacuum

Amnesty International's remit does not, of course, extend to providing political, geopolitical, or moral context to its work. But this does not mean the rest of us should not. In fact we cannot afford not to provide this context, else we lapse into viewing the world through a prism of moral absolutes that are the very antithesis of truth and justice.

© AFP 2021 / STR
Syria's New Constitution Marks a Seminal Moment in the Country's History
War and conflict is an atrocity in of itself. It represents a breakdown in humanity, which is why it is incumbent upon all right-thinking people to do whatever it takes to avert it.

When it comes to the Middle East conflict and instability has unfortunately achieved a lamentable status of normalization. The primary reason for this state of affairs are the imperialist policies of the West, wherein the region, its states and peoples, have been reduced to pieces on a chessboard available to be moved around, removed, and changed according to Western strategic, economic, and geopolitical interests. The catastrophic consequences of the repeated instances of regime change that these policies have resulted in are self-evident.

Another aspect to the Amnesty report that cannot be dismissed is the deep suspicion that exists across the Global South when it comes to Western NGOs, which are widely viewed as part of the apparatus of the aforementioned Western penchant for regime change.

In a May 2016 article on the decision by China to clampdown on the presence of Western NGOs in the country, geopolitical analyst Peter Koenig asks the salient question, "What would Washington say and do, if thousands of Chinese and Russian 'NGO's were to infiltrate US territory under all sorts of philanthropic pretexts, but in reality to subvert the US population against their government?"

It is a question that answers itself.

Questions Over Neutrality and Independence

The notion that NGOs are completely neutral and independent is clearly disputatious. Returning to Amnesty International (AI), Francis Boyle is a US academic and professor of international law who once sat on the board of AI. Of the organization's past work, he has been particularly scathing.

"Amnesty International is primarily motivated not by human rights but by publicity," Professor Boyle said in a 2002 radio interview.

"Second comes money. Third comes getting more members. Fourth, internal turf battles. And then finally, human rights, genuine human rights concerns. To be sure, if you are dealing with a human rights situation in a country that is at odds with the United States or Britain, it gets an awful lot of attention, resources, man and womanpower, publicity, you name it, they can throw whatever they want at that. But if it's dealing with violations of human rights by the United States, Britain, Israel, then it's like pulling teeth to get them to really do something on the situation."

The point is that Amnesty's boast that it is entirely independent of any government has been proven untrue.

In a 2013 piece on the NGO by Palash Gosh — Amnesty International: The High Cost of Human Rights Activism and Charity — that appeared in the International Business Times, we learn that, "NGO-Monitor, a Jerusalem-based NGO that monitors the activities of global activist organizations, has found much at fault with Amnesty. For example, while Amnesty claims it does not take donations from governments or political parties, NGO-Monitor noted, in 2008, the campaigners received a four-year grant from the British government's Department for International Development (DFID in excess £3 million, including more than £840,000 in 2011 alone."

Gosh continues, "Amnesty has also received funds from the European Commission, as well as from the government of Netherlands, the U.S., and Norway. In 2009, NGO-Monitor cites, Amnesty received €2.5 million (approximately 1 percent of its donations) from government entities. The British government was the third largest donor (at €800,000). Amnesty also received government funding in 2008 (€1million), 2007 (€1 million), and 2006 (€2 million)."

The Necessity of Ending the Conflict

Again, it bears repeating that none of the aforementioned implies that the Amnesty report claiming mass torture and executions by Syrian security services and authorities is untrue, falsified, or concocted. It does however point to the fact that such reports, given the recent history of regime change in the region and the resulting catastrophic consequences, can never be taken at face value.

What cannot be denied is that the conflict in Syria has plumbed new depths of depravity and human suffering, and that finding a way to resolve it should be the overriding priority for anybody and everybody who wants to see this suffering brought to an end.

As for war crimes, all those involved in turning Syria into a vast slaughterhouse are guilty; prime among them those who have fomented, supported, and funded the concerted attempt to turn the clock back in the country to the 7th century.