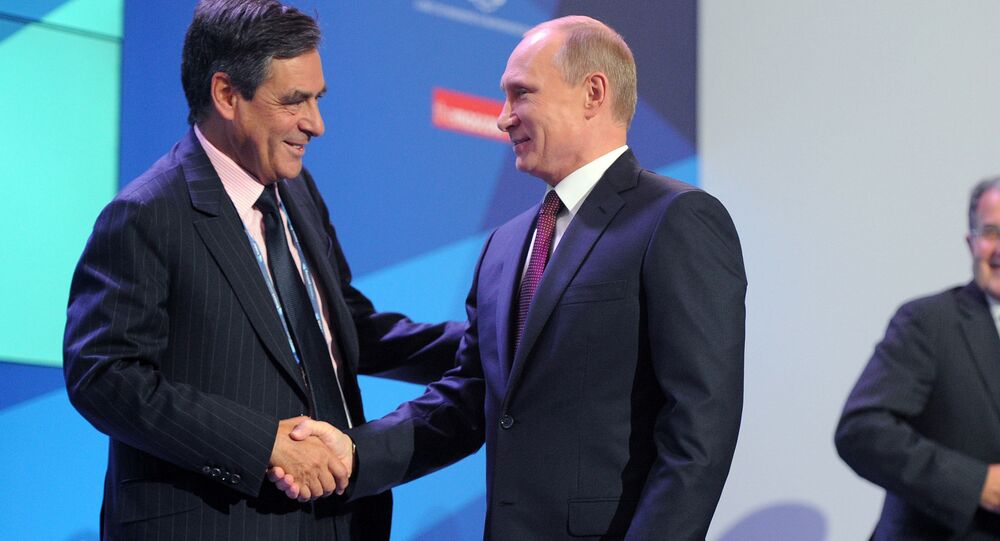 'Russian Card' in French Presidential Run is Not About Russia, Actually

With over 50 percent of French voters expecting Francois Fillon to become the country's next leader, according to a recent poll, let's try to find out what is really hiding behind the "Russian card" bandied about in the campaign.

A total of 55 percent of respondents consider Fillon, the presidential nominee from the center-right The Republicans party, is more likely to win than his rivals, an Ifop poll for the Jornal du Dimanche newspaper indicated.

© AFP 2021 / MARTIN BUREAU
Fillon: Hollande's Presidency Ending Up With 'Political Chaos'
Levels of actual support proved to be less, with just 28 percent of voters saying they want to see Fillon as the future leader. Slightly less than half considered the presidential hopeful to be capable of carrying out reforms in France, but fewer than 30 percent think that he understands the problems facing the general population. Over 60 percent expressed concern over the former prime minister's program.

However, despite these economic concerns, one fact is clear — the French are expecting Fillon to win the election. And this may imply that the presidential hopeful's views on Paris' foreign policy are playing quite an important role this time.

One of the things that helps Francois Fillon tower over the French political landscape is his sober stance on what role Paris should play on the international arena. Viewed as a true de Gaullist (follower of iconic President Charles de Gaulle's policies), Fillon wants France to be equally independent from the East and the West.

Let's dig deeper to puzzle out how France's political and economic independence are connected with Russia.

Fillon's de Gaullist stance must be resonating with Frenchmen who cannot but notice how the Fifth Republic was drawn into the fresh round of the US-Russia standoff against its will. Back in 2015, Fillon said "Europe has lost its independence" and said "the US is dragging it into a 'crusade' against Russia, which absolutely contradicts European interests."

© Photo : @MailOnline
March of Pigs: Angry French Farmers Unleash Swine in Supermarket (VIDEO)
As a part of the European Union, France had to smother its own voice, slap sanctions on Russia (despite the EU cherishing the status of Russia's largest trade partner) and suffer a broadside of countermeasures by Moscow. This imposed "lose-lose" strategy has eaten deeply into the French economy, battering agriculture in particular.

French lawmaker and former defense minister Gerard Longuet told Sputnik that Fillon "would use France's diplomatic authority to try to reach an agreement between Europe and Russia".

As for the Ukrainian conflict serving as a cornerstone of rebuilding the edifice of EU-Russia relations and scrapping the sanctions, Fillon clearly stands out by calling on Kiev to implement the Minsk agreements — this draws a thick line between his rhetoric and the mainstream mantra of illogically blaming Moscow for Kiev's intentional or unintentional inability to deliver on what is has promised to do in written form.

© AFP 2021 / LOUAI BESHARA
Fillon's 'Realistic' Approach to Assad Can Help 'Break the Ice' on Syria
And finally, there is another hot button issue which has become personal for almost every Frenchman — the international terrorism that has left deep scars on the nation. Al-Qaeda staged the Charlie Hebdo massacre almost two years ago, Daesh killed 130 people last November in Paris, and committed a heinous attack with a truck ramming into a crowd in Nice this July. However, the accepted line in the French leadership is to throw verbal sand in the machine of Russia's operation in Syria — which is actually aimed at rooting out extremism that has dealt crippling blows to France. In contrast with the ruling establishment, Fillon overtly promotes the idea of teaming up with Moscow in order to eradicate global evil.

"I see a strong pro-Russian sentiment in Francois Fillon that makes me think he would not protect properly the independence of France," Valls said in an interview to Brut outlet.

But Fillon's views are in fact perfectly rational and well-targeted rather than leaning toward any kind of "special relationship" with a certain country. What Valls describes as a "pro-Russian sentiment" is in fact a desire to restore economic ties and to eliminate the threat of terrorism. The "Russian card" is just a facade covering France's pending issues.

The French presidential elections will take place in April and May 2017. Various polls indicate that Fillon is likely to face off with far-right candidate Marine Le Pen from the National Front. The ruling Socialist Party is lagging far behind after its popularity plunged during President Francois Hollande's term.

Amid the Socialist Party's cast-iron policy, Francois Hollande's approval rating hit 4 percent and he bowed out of the race — is it not a barometer showing France is in need of a fresh wind of change?

French Presidential Candidate Fillon to Reach Second Round of Election

Things That Can Prevent Fillon From Becoming France's Next President