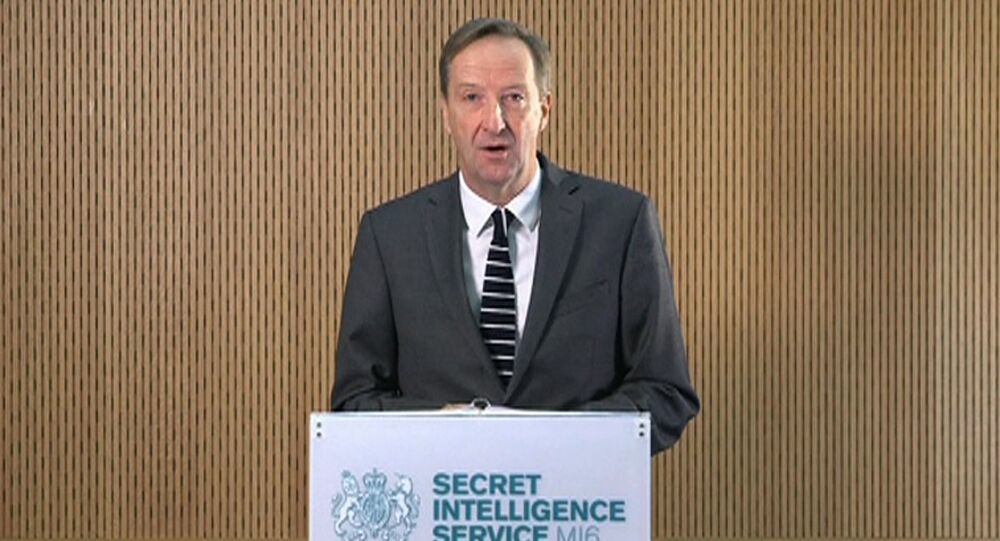 Britain's New Intelligence Chief is Living in an Upside Down World

Just when we thought it could not get any worse for a British establishment that has been floundering around in a perfidious swamp of dishonor when it comes to its foreign policy in recent times, up pops the new head of MI6 in the shape of Alex Younger with an opening speech in his new role to prove us wrong.

From the vantage point of MI6 headquarters in London, Mr. Younger took the opportunity to level a withering attack on the Russian and Syrian governments, accusing them of "defining as a terrorist anyone who opposes a brutal government," before going on to assert that in so doing they "alienate precisely that group that has to be on side if the extremists are to be defeated."

He went to allege how "in Aleppo, Russia and the Syrian regime seek to make a desert and call it peace. The human tragedy is heart-breaking."

The reference to Roman history notwithstanding his remarks not only defy reason, they defy sanity.

Indeed, accusing those who are fighting terrorism of creating terrorists is as ludicrous as accusing the Red Army of creating more fascists for daring to liberate Stalingrad in World War II. In truth, and as I suspect Mr. Younger knows full well, the proliferation of terrorism across the region and beyond is rooted in western foreign policy since 9/11, responsible for destabilizing the region and opening up space for the cancer of religious extremism and sectarianism to erupt.

For those of us who've been following these events seriously, the courage and tenacity of the Syrian army and its allies has stood in sharp contrast to the 'fiddling while Rome burns' position of the US, Britain, and France when it comes to combating this terrorist threat. Here we are talking countries that have perfected the art of speaking the language of anti-terrorism while acting to derail the efforts of those actually engaged in fighting it.

Worse, they have been exposed as utterly and wholly duplicitous in claiming the mantle of democracy and human rights while maintaining close relations with a Saudi kleptocracy whose slaughter of civilians in Yemen is being carried out with weapons and military equipment sold to them by British arms companies.

It bears repeating: there is no democratic revolution underway in Syria, and the only moderates involved in the conflict are the soldiers of the Syrian Arab Army and its allies, including Russia, fighting to preserve Syria as a secular non-sectarian state that embraces modernity, rather than allow it to descend into a sectarian abyss involving the clock being turned back to the 7th century.

As for the brutal nature of the conflict, this reflects the stakes involved, previously outlined, and the inhuman nature of the barbarism that has been inflicted on the country and its people.

For remove the obfuscation and the conflict in Syria represents an historic line drawn in the sand when it comes to Western hegemony in a region it had allowed itself to believe was its to dominate and control according to its own strategic and geopolitical agenda. In the process the wishes, interests, and welfare of the people of the region are inconsequential. After all, if it were otherwise, the Britain that Mr. Younger serves would never have embarked on the war in Iraq in 2003, whose devastating consequences are of such magnitude that historians will be levelling a withering indictment against the British state for generations to come.

Countries such as Britain, France, and the United State owe a debt of gratitude to those who've been willing to combat extremism and terrorism in Syria. With this in mind, it is simply not tenable to infer that those engaged in acts of mass and wanton slaughter in Syria are rebels, yet describe them as terrorists when they pop up in Paris or Brussels or London, etc.

In the last analysis, what Mr. Younger's remarks confirm is that an expensive education means nothing when its recipient is wearing ideological blinkers that distort reality to such an extent he is in danger of losing his or her grip. How else are we to explain Britain's foreign policy over the past decade and more, one that has paralleled the steep decline in credibility, respect, and influence it has likewise suffered?

We can only wish Alex Younger success in his new role as head of MI6. It is vitally important that the decisions he makes are the right ones given the potential calamitous price attached to any mistakes and errors he might make. This is why we hope and pray that his opening speech is the worst rather than least of those mistakes.