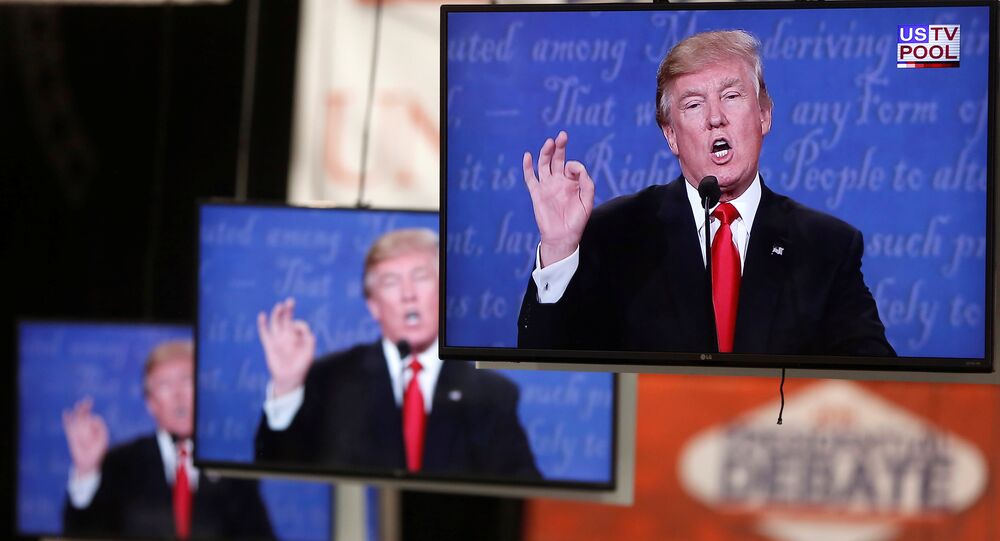 Negative coverage in the US media of Donald Trump during the presidential race backfired because the businessman and reality TV star used the attention to sway public opinion in his favor, analysts told Sputnik.

© REUTERS / Jim Urquhart
Vast Majority of Americans Believe US Election Media Coverage Was Biased
WASHINGTON (Sputnik) — A survey by research firm TNS UK, commissioned by Sputnik and released Thursday, showed that 80 percent of Americans considered domestic media coverage of the 2016 campaign was biased toward one or the other of the major-party nominees.

"Media bias went for Hillary [Clinton] against Trump, but it had a backfire effect because the media moguls are too self-absorbed to realize how much they are hated," Executive Intelligence Review senior editor Jeff Steinberg told Sputnik.

"Media elites thought they were shaping public opinion, and they were, but in favor of Trump because anyone who the mainstream media hates is just fine with them, regardless of flaws and legitimate concerns," Steinberg averred.

In his view, Trump won because he understood that he could play the mainstream media's animus to his advantage, including news outlets’ disdain for “deplorables” — Clinton’s term for some Trump supporters.

Mainstream American media are working against their own business interests by failing to realize how much they’re disliked by most of the public and are gradually being supplanted by independent digital platforms that they don’t control, Steinberg asserted.

The only way big media companies can reverse this trend and restore public trust is by disconnecting from their corporate sponsors, but that is virtually impossible, according to Steinberg.

Ohio Northern University assistant history professor Robert Waters told Sputnik the media favored Trump during the Republican primary campaign because it was good for ratings. News outlets assumed the New York real estate mogul would be easier for Clinton to beat in the general election – until Trump turned that assumption on its head.

© Sputnik / Mark Ovaska
US Media Coverage of Elections Was Biased - Poll
"Trump won because he didn't wilt under the media's constant attack and, I suspect, because the media had finally overplayed its hand," Waters contended.

The media could win back Americans’ trust if they began reporting the news fairly, he maintained, but post-election coverage indicates they have "doubled down on bias."

He said mainstream media overreacted when Trump ditched the pool of journalists who traditionally cover presidents-elect in order to go to dinner with his family, with some outlets calling the snub unprecedented.

"In fact, President-elect Obama had done the same thing in 2008, with hardly a comment from the press," Waters said.

Radio talk show host and journalist Stephen Lendman said he believes the US media operate as agents for “wealth, power and privilege,” an affiliation that helped drive pro-Clinton bias.

© AFP 2021 / Jim Watson
Trump Blames Media for Instigating Post-Election Protests Across US
"Extreme bias for Hillary against Trump was the worst in US presidential campaigns ever — for sure in my memory since Harry Truman defeated Tom Dewey in 1948. I was age 14 with no television, yet I remember it well," Lendman recounted.

This week, Trump criticized the New York Times for poor and inaccurate coverage of what he has been called “the Trump phenomena."

Clinton supporters, for their part, accused mainstream US media of bias against the Democratic candidate throughout her campaign, citing incessant coverage of an FBI investigation into her email practices as US secretary of state.