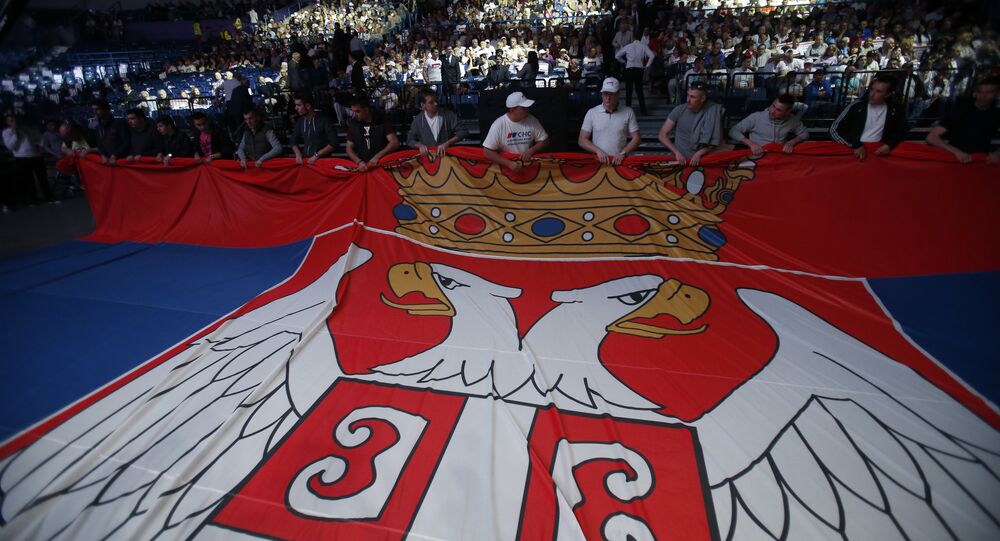 When, If Ever, Will Serbia Finally Make a Geopolitical Pivot to Russia?

Independent Eastern Europe expert Nikita Komarov discusses the prospects of Serbia becoming Russia's closest partner in Southern Europe, and what Moscow will have to do to make this happen.

Last week, Serbian President Tomislav Nikolic visited St. Petersburg to open a an honorary consulate in the Russian city. During his trip, the president gave a candid interview to Sputnik, revealing that Belgrade is frustrated over Brussels officials' lack of clarity about what awaits Serbia "at the end of our road to [join] the EU."

Specifically, the president noted that the EU hasn't exactly been accommodating in accepting Serbia's sensitivity over the Kosovo issue, and in fact has repeatedly taken the side of the breakaway republic. Belgrade continues to see Kosovo as an integral part of its territory.

But Belgrade isn't averse to the Serbian army training with the US and NATO, either, participating in the US Army-organized exercise Combined Resolve VII in Germany in August.

In recent years, Serbian officials' policy of maneuvering between friendly overtures toward Russia and cooperation with and efforts to join Euro-Atlantic structures has frustrated Russian analysts, who have insisted that Belgrade make up its mind about the course it wants to take. Independent geopolitics analyst Nikita Komarov is not one of them. In a recent analysis for news and analysis website PolitRussia, Komarov explained that if Moscow hopes for Serbia to make such a significant choice, and in Russia's favor, it will first have to step up its own efforts on the diplomatic front.

© AFP 2021 / SAVO PRELEVIC
Judgment Day: Montenegro Prime Minister Finally Facing Defeat After NATO Antics
"Serbia is currently the last state in the Balkans that has not lost its neutrality," the analyst explained. "All other pieces of the former Yugoslavia, as well as neighboring countries, have been integrated in one way or another into Euro-Atlantic structures, which totally control social and political processes in these countries."

But Serbia "could also suddenly become part of NATO and the EU," the analyst added. "Russian influence in the Balkans has proven insufficient to prevent Euro-Atlantic expansion in the region. However, Serbs' ethno-cultural code, and the heavy imprint of the NATO-led war at the end of the 20th century, continue to be a stumbling block in the path of Western globalists."

"Unfortunately, time is not on the side of the Serbian people, nor in the interest of Russia. US soft power is gradually drawing Serbia into the West. A standard 'processing of the brains of the population', in the best traditions of color revolutions, is taking place. Serbian television and the print media constantly talk about the benefits of European integration, and the Serbia' Cyrillic script is slowly but surely shifting to the Latin alphabet."

Meanwhile, Komarov noted that for months now, Russia's own limited efforts, specifically via the Russian-Serbian humanitarian center in Nis, have been subjected to a series of hysterical allegations from Western media and their Serbian hangers-on. The Nis center, which employs only a handful of people –four Russians and five Serbians, has been blasted as a 'secret base for Russian military intelligence', meant to spy on NATO forces stationed in the region; this despite the fact that the center's real mission is to help the Balkan nation deal with emergencies, including floods and fires.

In any case, the journalist suggested that if they chose to do so, Moscow and Belgrade would have every right to establish "even full-fledged military bases on Serbian territory," and it wouldn't be the concern of any outside power.

© AFP 2021 / ARMEND NIMANI
US 'Winked at Kosovo to Raise Albanian Unification Issue' After RS Referendum
Unfortunately, "this policy of double standards in the media cannot help but to affect the mood of the population. 48% of the country is in favor of European integration, with only 28% opposed. However, the truth is, Serbs don't really have much of a choice. At the moment, Russia cannot really offer Belgrade an alternative. Therefore, it's hardly worth blaming the South Slavic nation of any sort of 'treachery'."

Admittedly, Komarov noted that opposition to NATO remains stronger – and not just among the older population. "Today's 18-29 year-olds grew up in the period of NATO's bombardment of Belgrade, and even massed propaganda is unlikely to convince them of the alliance's 'friendly intentions'."

"But here too it's necessary to remember Serbia's betrayal by Boris Yeltsin and his entourage. In 1999, Yugoslavia was not accepted into the Russian-Belarusian union state, Yeltsin refused to arm Milosevic with S-300s, and Russian airborne forces were subsequently withdrawn from the Pristina airfield."

Fortunately, Komarov pointed out, most Serbs seem to be aware that Yeltsin's betrayal was not the Russian people's choice. Nevertheless, the situation is not heading in a positive direction as far as Russian-Serbian relations are concerned. "The Serbian government is essentially moderately pro-Western. Combining the ideology of EU integration and 'defense of Serbian national interests', the Serbian Progressive Party successfully received a majority in parliamentary elections in April. Both President Nikolic and Prime Minister Aleksander Vucic are members of this party."

The journalist recalled that both leaders have repeatedly vacillated, promoting military cooperation with both Russia and NATO while insisting that Serbia will not join the Western alliance. Meanwhile, both men have pushed for integration into the EU, but not before the Kosovo issue is resolved.

© AP Photo / Dimitri Messinis
Brothers in Profit: How to Make Money on NATO Bombings of Yugoslavia
At the same time, "if Serbia's pro-Russian forces, in the face of Vojislav Seselj and the Serbian Radical Party, or the Dveri-Democratic Party, we to come to power, the republic would immediately face intense pressure from all sides." Komarov suggested that for the moment, the balance of forces is such that Russia probably wouldn't have sufficient resources to protect the country, even if Belgrade pushed hard for an alliance.

"On the whole, the relationship between official Belgrade and Moscow are somewhat uncertain. The worsening geopolitical situation naturally raises the question of Serbia making a clear choice about whether to join Russia or the West. Belgrade continues to hold to a maximally neutral position, smiling diplomatically to both sides. Admittedly, Russia is only beginning to restore its former geopolitical weight, and cannot offer full support to Serbia. "

Ultimately, Komarov stressed that "it remains to be seen when Moscow will be able to triumphantly return to the Balkans. However, this will not occur before the resolution of the Ukrainian, Moldovan, and even the Syrian issues. It can only be hoped that by this time, Euro-Atlantic structures will remain unable to absorb Serbia, the last bulwark of support for Russia in the Balkans."