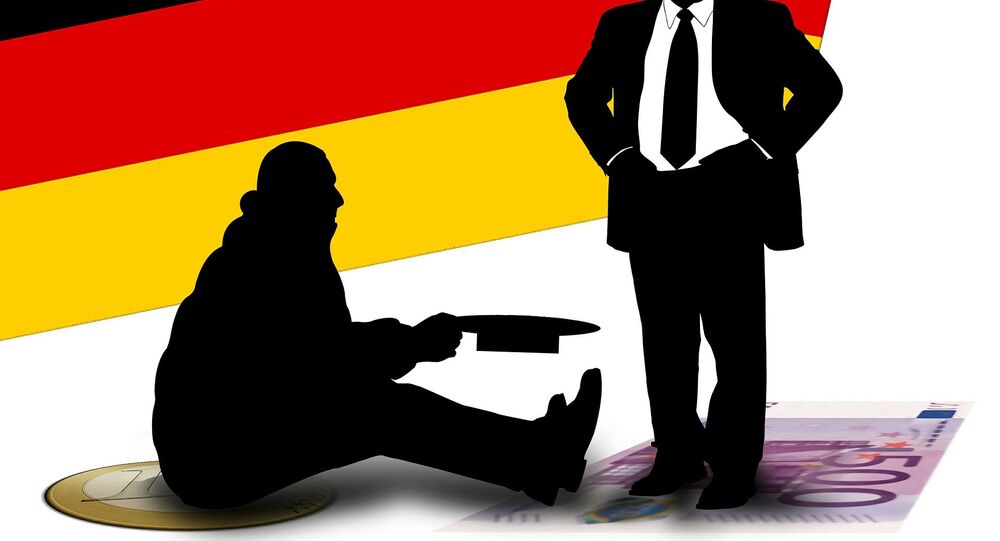 Joseph Stiglitz's book, "The Euro and Its Threat to the Future of Europe" exposes an ill-conceived, German-dominated currency, whilst suggesting ways to rescue it. But we should save people and economies, not the euro, Italian economist Dr. Giacche told Sputnik.

Doomed from the start by a "mixture of flawed economics and ideology," derailed by "special interests" and responsible for a widening gap between the more wealthy and poorer EU member states, the euro has failed to deliver the much-promised stability and prosperity.

A referendum on it anywhere in the Eurozone would make Brexit look like child's play.

Yet Joseph Stiglitz believes that a reformed euro could work.

"The EU's fatal decision was to adopt a single currency, without providing for the institutions that would make it work," Stiglitz says.

He also commends a full banking union, flexible exchange rates to adjust to economic cycles and transfers from richer to poorer EU members, especially during crisis.

"Without a minimal degree of risk-sharing, no monetary union can possibly function."

Stiglitz speaks of a "German austerity ideology" as the inspiring principle behind policy-making in the Eurozone. This translates into an obsession with price stability to rigidity towards exchange rates and an insistence on convergence between different economies.

"The Maastricht Treaty mandates that 'the primary objective of the ESCB [European System of Central Banks] shall be to maintain price stability.' This is unlike, for example, the Federal Reserve, which also has the objective to maintain a high level of employment," Italian economist Dr. Vladimiro Giacche, chairman of Centro Europa Ricerche (CER), told Sputnik.

At the apex of the Greek crisis, in the summer of 2015, huge amounts of EU money were  umped into "bailing out" Greece — or so we were told.

But, Stiglitz explains that mostly the funds were used to help German and French banks suffering from excessive exposure in risky Greek bonds.

"It was a masked bailout of western banks," he said.

"Greek pensioners were made to pay for German and French banks."

© Photo : Pixabay
IMF Releases Damning Report on Failures of Greek Bailout Deals
The Greek crisis was just the latest in a series of such euro-induced crisis. Stiglitz cites Spain and Ireland as examples of "lessons not learned."

"Convergence criteria did not do the trick. But the EU doubled down on them instead. Now reform or else divorce amicably," is his message.

"No reforms will bring more stagnation. This will lead, sooner or later, to a referendum in the Eurozone" and the unravelling of the euro will begin, according to Stiglitz.

Stiglitz describes the euro as "an example of economic integration out of sync with political integration."

But Dr. Giacche, author of "Anschluss" — a study of Germany's 1990 currency unification — explains why even political integration is hardly a panacea.

"The currency unification between West and East Germany was a disaster,"  Dr. Giacche said quoting the Bundesbank's governor of the time, Karl-Otto Pohl.

"Before the reunification, one West D-Mark was exchanged with 4,5 East Marks. The decision to value the East Mark at parity with the West Mark made the prices of East German products increase by 350% overnight, and destroying Eastern industries.

"This is the fate of all currency unions between countries or regions whose economies are at different levels of development. In these cases, a single currency does not reduce the gap between the economies. It widens it," Dr, Giacche told Sputnik.

'No Transfers, We Are Germans'

Dr. Giacche goes on to explain that, once the former East Germany had been deindustrialized, "massive injections of western money were needed to finance consumption."

Indeed, a special tax was introduced — and never since removed — on the salaries of the people living in the former Western regions (Länder).

What's more, German Länder are often at odds with each other regarding the allocation of the EU structural funds, most of which now go to the Eastern regions.

Bavaria in turn resents having to transfer, within the country's equalization payments scheme, much of its surplus to deficit-prone regions like Bremen.

A rushed, ill-conceived currency unification thus left German taxpayers and regions burdened with transfers. In all fairness, it is no wonder that, faced with new, EU-wide transfers, German voters get a little nervous.

While ordinary Germans are saddled with transfers, their federal government enjoys an export bonanza.

Stiglitz suggests sanctioning excessive exports. A provocation? Not so much, according to Dr. Giacche.

"The EU's 'Stability and Growth Pact' already contemplates a sanction mechanism for a commercial surplus of 6%, considered 'excessive macroeconomic disequilibrium.' Germany has violated this threshold for years — latest data put Germany's surplus at 9% — but the European Commission does not bother," Dr. Giacche told Sputnik.

© REUTERS / Remo Casilli
Mixed Messages From Merkel, Hollande, Renzi Over Future of EU
Kohl and Mitterand, who led Germany and France during the 1980's and 1990's, wanted to tie down a reunified Great Germany to the European project.

In those same eventful years, Mrs. Thatcher worried instead, that the plan for a European Germany would eventually result in a German Europe.

If Joseph Stiglitz and Dr. Giacche are anything to go by, we now have a German Euro.