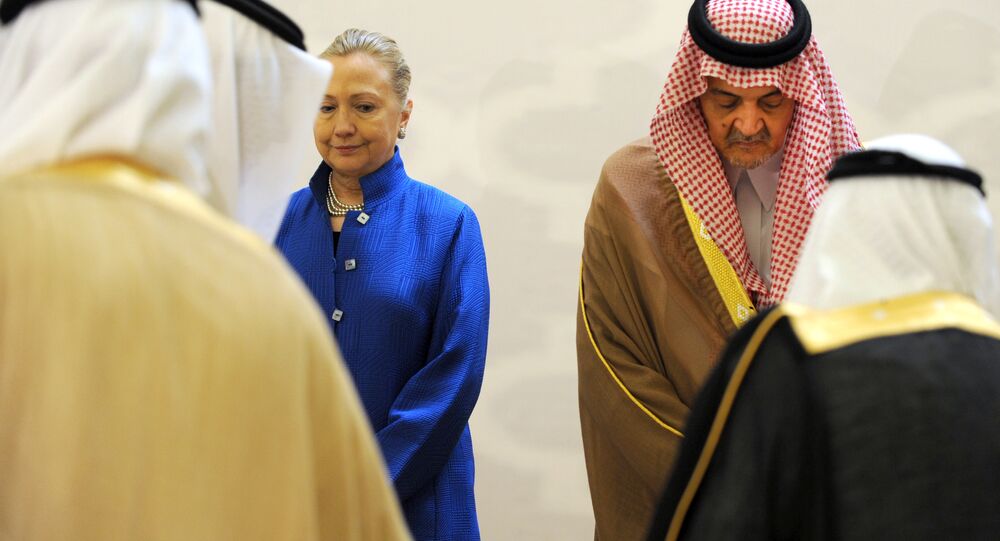 The media has had a field day commenting on Donald Trump's words about cooperation with Russia against ISIS, labeling him a 'Kremlin agent' and a danger to the Western security order. But what about Hillary Clinton and her foundation's ties to the Saudis? If Trump is 'Moscow's man', does that make Clinton the candidate of Middle Eastern sheikdoms?

The US media has been relentless in its efforts to sink Republican presidential candidate Donald Trump's campaign, in part due to the candidate's string of friendly remarks and gestures toward Russia and President Vladimir Putin. The media have accused Moscow of every sin imaginable, from meddling in America's elections, to using Trump advisor Paul Manafort, who was called 'the Kremlin's man in Ukraine', to outright calling Trump himself a 'Russian agent'.

Former NATO chief Anders Rasmussen joined the party bashing Trump recently, slamming him for having "his own views on the Ukrainian conflict," and adding that to top it all off, "he praises President Putin!"

© REUTERS / Rick Wilking
Trump Calls Russia an Ally, Says Hillary Wants ‘Something Worse’ Than Cold War
Admittedly, Mr. Trump does seem very open to the idea of negotiating with Russia, and even partnering with Moscow to tackle some of the greatest challenges facing the world today, including radical Islamist terrorism. In that sense, he may really be the most 'Russia friendly' presidential candidate the US has seen since 1945, not counting the early 1990s, when Washington's friendly overtures toward Russia were based on the condition that Moscow does everything US officials tell it to.

Does that make him a puppet to the Russians, the Kremlin and to Vladimir Putin personally? Not likely. Despite all the media investigations and even more accusations, no substantiated evidence has been presented demonstrating that Trump has any significant business or personal interests in Russia which would create a conflict of interest. The businessman held a Miss Universe Pageant in Moscow a few years ago, and tried, unsuccessfully, to build a Trump tower in the Russian capital. But he also has assets around the world, in Scotland, Dubai, and in over a dozen other countries. Does that make him the agent of these countries, too?

The Times' piece reported on the fact that the Clinton Foundation has accepted tens of millions of dollars from countries that the US State Department has repeatedly criticized for human rights abuses and discrimination against women. The offending countries purportedly include Saudi Arabia, the United Arab Emirates, Qatar, Kuwait, Oman, and Brunei, along with Algeria. Riyadh, the paper noted, was "a particularly generous benefactor," giving between $10 and $25 million to the Clinton Foundation, with at least another $1 million donated by the 'Friends of Saudi Arabia' organization.

© AFP 2021 / DOMINICK REUTER
Clinton Foundation Scandal Over Foreign Donors Blows up on National Television
The scandal didn't end there. Speaking to CNN reporter Dana Bash, Clinton Campaign manager Robby Mook could not coherently explain why the Clintons weren't willing to stop accepting donations from foreign 'investors' unless Clinton became president of the United States. Instead, Mook tried to divert the question to Donald Trump, saying the candidate has never revealed his financials, and adding that Mrs. Clinton had taken "unprecedented" steps to being "transparent."

And the plot thickens. On Sunday, conservative US and British media revealed that Huma Abedin, a longtime friend and top aid to Clinton, had worked as an assistant editor for a radical Islamic Saudi journal for over a decade. The publication, called the Journal of Muslim Minority Affairs, featured everything from pieces opposed to women's rights, to articles blaming the US for the September 11 terror attacks.

In one article in January 1996, Abedin's own mother wrote a piece for the journal, where she complained that Clinton, who was First Lady at the time, was advancing a "very aggressive and radically feminist" agenda which was un-Islamic and dangerous for empowering women.

Abedin has long been accused by independent media in the US and elsewhere of having connections with Islamic organizations, including the Muslim Brotherhood, charges which have long been labeled as nothing more than a conspiracy theory. But Sunday's story seems to have ruffled a few feathers in some high places, with a Clinton campaign spokesperson explaining (rather unconvincingly) to the New York Post that Abedin played no formal role in the radical journal. "My understanding is that her name was simply listed on the masthead in that periodical," the spokesman said.

© AFP 2021 / MANDEL NGAN
Democratic Presidential Nominee Hillary Clinton (L) and longtime aide Huma Abedin at a campaign event in Iowa, November 2015.
© REUTERS / Carlos Barria
Daesh-Gate: The Scandal That Could End Hillary Clinton's Campaign
These two stories, the first offering new details including dollar estimates about the money received by the Clinton Foundation from the Saudis, and the second shedding light on her top advisor's apparent ties to a Saudi journal propagating Islamist ideas, should lead the media to look for answers to some very troubling questions. These should be the same kinds of questions asked earlier this summer, when a formerly classified 28 page chapter of the 9/11 Commission Report was finally released, revealing that Saudi officials had supported the hijackers who carried out the terrorist attacks against the United States in 2001.

And so the question stands: If the media feels justified in crucifying 'Kremlin agent' Donald Trump for a Moscow beauty pageant and some nice words about Vladimir Putin, will it provide the same level of scrutiny for Mrs. Clinton, given the knowledge that her Foundation has taken in tens of millions of dollars from the Saudis, and that her top advisor seems to have been a supporter of hardcore Islamist ideology?

Who Doesn't Have Shady Foreign Connections This Election?