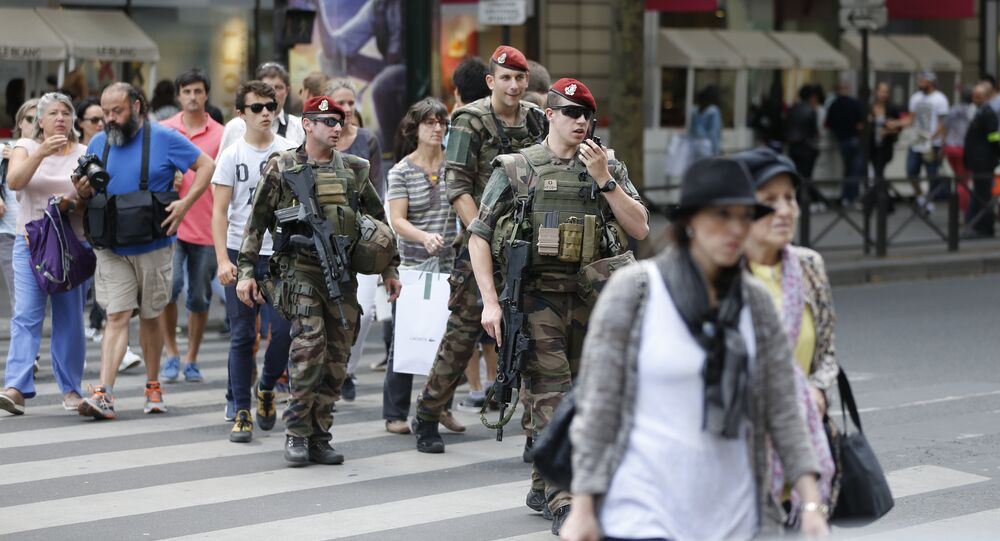 With Europe growing more and more threatened with being overrun by radical Islamist terrorism, Russian political commentators offer their views on how European nations and their people can cope with the phenomenon and effectively battle it.

© REUTERS / Pascal Rossignol
France Terror: How Did 'Ticking Time-Bomb' Carry Out Church Attack?
On Tuesday, the Russian Foreign Ministry warned that it cannot rule out the possibility of further terror attacks in Europe, in light of the continent's ongoing migration crisis.

Speaking to Russian media, Deputy Foreign Minister Oleg Syromolotov warned that the threat of terrorism against Europe is growing, as Daesh (ISIL/ISIS) and other terrorists are prone to sending their adherents to the continent among the migrants coming to Europe from North Africa and the Middle East.

At the same time, the Russian diplomat added, "the chaotic processes in the Middle East cary certain risks for the national security of our country as well," with "the number of citizens from the territory of the former Soviet Union who have joined Daesh numbering in the thousands."

Moscow, Syromolotov noted, also regrets the "notorious double standards" many Western countries continue to show in dividing the terrorists into categories of 'bad' and 'not all that bad', and their use for geopolitical schemes aimed at interfering with, destabilizing and attempting to topple 'undesirable regimes'.

"This short-sighted and ill-advised policy, aimed at achieving these countries own interests, to the detriment of the common cause of the fight against terrorism, is one of the reasons for the creation of a crisis situation in the Middle East and North Africa, having led to an unprecedented growth of Daesh, the Nusra Front, and other [radical] groups," the diplomat emphasized.

© Sputnik / ALEXEY NIKOLSKY
Putin, Rouhani to Discuss Syria, Iraq, Terrorism in Europe
On July 26, the same day that Deputy Minister Syromolotov issued his warning, two armed men took five people hostage at a church in the Normandy region commune of Saint-Etienne-du-Rouvray. The attackers murdered at least one hostage, wounding three others, one severely, before being killed by police. Daesh has claimed responsibility for the attack.

A day earlier, a Syrian man detonated a bomb outside a music festival in southern Germany, killing himself and wounding 12 bystandards. Authorities have not ruled out Islamist overtones to the crime. A day before that, on July 24, a 21-year-old asylum seeker armed with a machete attacked a pregnant woman with a machete, killing the woman and leaving five others injured before being detained.

On July 19, an 17-year-old Afghan armed with an axe and knife attacked passengers in a train in Bavaria, seriously injuring three people before being killed. Meanwhile on July 14, Bastille Day celebrations in the French city of Nice were interrupted when a Tunisian man deliberately drove his truck into a crowd of people and then opened fire, killing 84 people. These attacks were preceded by the terror attacks of March 22 in Brussels, Belgium, where two suicide bombers blew themselves up in the city's international airport and another in a metro train, killing 35. Finally, one of the worst terrorist attacks in European history rocked Paris in November, where a group of terrorists carried out a series of coordinated gun and bomb attacks, killing 130 people and injuring over 350 more.

Earlier this month, EU law enforcement agency Europol calculated that a record 211 terrorist attacks had been planned, foiled or carried out in EU countries in 2015 alone, which is the highest figure since recording began in 2006.

For his part, Tsipko, an expert at the Moscow-based Institute of Economics recalled that he had just returned from a meeting in Switzerland of a Protestant organization dedicated to tolerance and universal reconciliation.

"It is significant that this group includes people form the WWII-era anti-fascist resistance…The organization has called on its members to treat immigrants as brothers, and has not tired of warning Europeans against nationalism and intolerance. Here is an example of truly Christian beliefs – of Europe's fundamental values, and they do exist, however skeptical or pessimistic one can presently speak about them."

At the same time, the academic noted, "the tragedy" of contemporary Europe lies in the fact that "the intransigent, extremist organizations have begun to use this European kindness, this tolerance, for their own purposes…And this is a tragedy not just of Europe as it is the entirety of human civilization."

Essentially, Tsipko suggested, the crisis facing Europe is not so much a crisis of European civilization, so much as it is a failure by the security services and European governments to prevent the terrorists from carrying out their plans. At the same time, he added, European governments unquestionably need to work more closely in checking the people coming into their countries, to find out who they are, and to set clear limits and quotas for entry.

© REUTERS / Francois Lenoir
What the 'Open Door' Policy Will Mean for Angela Merkel in the Long Run
For his part, Viktor Aksyuchyts, a Russian philosopher and former politician, was more pessimistic, suggesting that the nature of present-day terrorism clearly carries with it a cultural and civilizational character.

"The terrorism plaguing nineteenth-century Russia demonstrated a phenomenon stemming from an illness of society. That is, 'gaps' emerged in society in which people collected, torn away from traditional culture, unable to adapt to the external environment in which they found themselves. Two centuries ago it was the [Russian] radical intelligentsia which found themselves in this position. In contemporary Europe it is migrants who have broken away from traditional Islam, and have found themselves in countries which are alien to them from the very beginning."

"In these lacunae," the philosopher explained, "people become susceptible to all kinds of radical ideologies, or, as I call them, ideological manias." This is especially the case "in the circumstances of today's information revolution, when access to the most varied information imaginable has become accessible to virtually everyone. And here these infectious ideas spread throughout the world via the internet, via the mass media, and infect people, those who are rootless in the cultural and civilizational sense. These people then begin a revolt against reality – in the most extreme form, by the killing of other people, and suicide."

Contemporary Europe, Aksyuchyts noted, is paralyzed by the phenomenon of terrorism, which has its roots in unbridled immigration. Europe, according to the philosopher, has demonstrated a fundamental "inability to digest immigration, and perhaps even to comprehend that the newcomers bring with them an alien civilization."

Essentially, the philosopher warned, "Europe has shown itself unprepared for the harsh challenge of history, not ready ontologically, including in the poor performance of its security services. But the main thing is that it is not prepared to face these new challenges on an intrinsic level; the disease in which Europe is now gripped is fatal for the continent."

© AFP 2020 / JOHN MACDOUGALL
Send Them Home - AfD Party’s Quick Fix Solution to Migrant Crisis
Asked why European elites, clearly aware that the continent no longer has the material or moral resources to 'digest' the migration flows, continue to open its doors, Aksyuchyts lamented that unfortunately, the problem lies in the fact that the continent's elites are, deliberately or not, "driving the continent toward suicide" through a failed socio-cultural policy.

"If Europe abandons its own civilizational-cultural and religious identity, what else is this if not suicide? It's obvious that the elementary resources of moral and ethical self-defense have not been put to use, not to speak of physical security…Having abandoned their inherent identity, Europeans deny themselves the will to struggle for self-preservation," the academic concluded.

Destabilization of Europe is ‘of Benefit to US, Turkey’