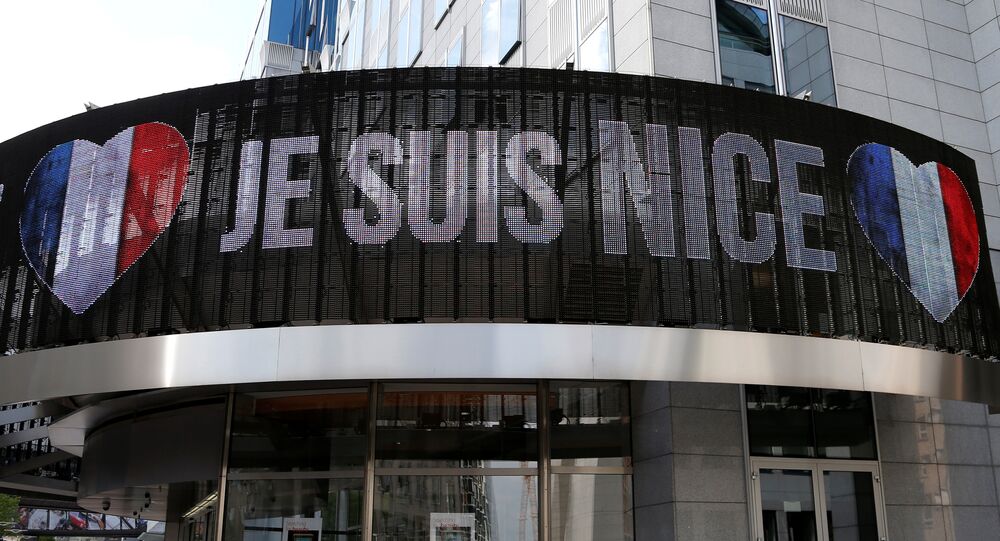 The National Front’s Marine Le Pen was already leading all presidential candidates by a wide-margin, but an attack on the country’s day of liberation seems all but certain to put the country on a crash course for far-right nationalism.

© AFP 2020 / Valery HACHE
Over 300 People Injured in Terror Attack in Nice - French Health Ministry
On Thursday evening, France once again was the target of a Daesh terror plot killing at least 84 people and injuring some 202 others as the people of Nice gathered to celebrate France’s national holiday, Bastille Day. Horror ensued when a commercial truck plowed through the unsuspecting crowd while the driver, and possibly other accomplices, shot into the crowd.

In the globalist world laid out by the European Commission and adopted in full by Socialist President Francois Hollande, terror attacks of this nature have become what US Secretary of State John Kerry referred to offhand following a separate strike two weeks ago at the Ataturk International Airport in Istanbul, Turkey as "daily fare."

As the country now looks to pick up the pieces following another mass casualty event that struck terror in the hearts of the public and ripped at the very fabric of France’s national identity, the possibility of France departing from the EU under the command of a future President Marine Le Pen appears all but certain marking the final act of the European experiment.

Will it ultimately be the Nice terror attack that is the final shot, the watershed moment where France decides that the economic benefits of the European Union are not worth the safety risk? Maybe.

Others will say that the terror strike at the Bataclan Theater in November 2015 that left 130 dead in the deadliest attack on France since World War II was the last straw with recent revelations that the victims of that horror were viciously tortured before by their Daesh assailants.

The reality is that the collapse of the European experiment and a move to shut down the open borders within the Schengen Zone has been a long time coming with similar populist uprisings occurring throughout Europe from Britain to Germany and Austria to Greece.

Revelations this week found that the German government botched a cover-up of the coordinated New Year’s Eve rape attacks of some 120 women by approximately 200 assailants who had come to the country as refugees pointing to a major cultural destabilization throughout the region.

The people of France have also protested against the European Commission’s undemocratic dictates to President Francois Hollande that were ushered through without a vote by Prime Minister Manuel Valls gutting years of hard fought labor reforms including vital protections like the 35-hour work week.

Frenchmen have lost their security, control over their country’s affairs, and their economy to an unelected cabal in Brussels forged on the people by a President with a 10% approval rating – these wounds appear to be insufferable for the proud French people who appear settled on taking a turn towards the opposite extreme of absolute nationalism.

The most recent public opinion polls, dating nearly five weeks prior to the terror attacks in Nice, show that far-right nationalist party leader Marine Le Pen torches her presidential opponents earning support from 28% of French voters – twice as many as for current Socialist President Francois Hollande and bludgeoning former Conservative President Nicolas Sarkozy who carries 21% of the French electorate.

Marine Le Pen has not been bashful about her ambitions to separate from the European Union telling voters in no uncertain terms that a vote for her will be a vote for Frexit. In a sternly worded editorial piece in the New York Times, Le Pen appealed to her country’s national pride saying that if Britain could shed the chains of the undemocratic European Commission, so too could the fervently independent French.

Now with an attack striking the country on its day of liberation, a day that commemorates the start of the French Revolution, the people of France may once again decide to revolt against the ruling elite that continues to ignore their concerns – July 14 may now mark the date of the country’s second revolution.