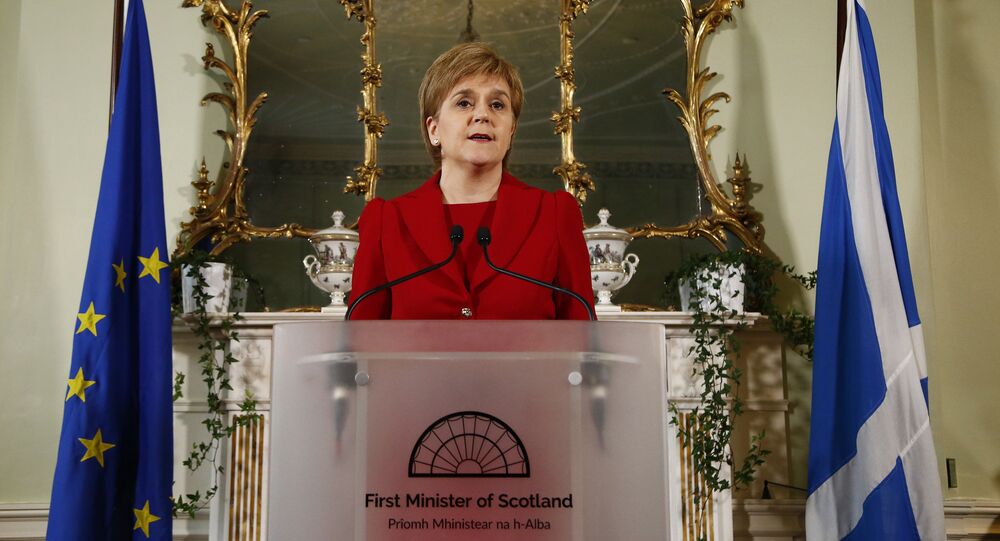 First Minister of Scotland Nicola Sturgeon will demand a central role in the United Kingdom’s Brexit negotiations with the purpose of keeping a region in the European Union during her first meeting with new British Prime Minister Theresa May, the spokesman for the Scottish government told Sputnik on Thursday.

MOSCOW (Sputnik) — On Wednesday, Theresa May was officially sworn as UK’s new prime-minister.

Congratulations to the new Prime Minister @theresa_may — despite our differences, I hope we can build a constructive working relationship

​Following this appointment Sturgeon offered her congratulations to May in her Twitter account, expressing hope that "despite our differences, we can built a constructive working relationship".

"The First Minister highlighted in a number of interviews yesterday that she wants the Scottish Government to be centrally involved in the negotiation process due to the overwhelming decision in Scotland to remain within the European Union, and again she reiterated that all options are on the table when it comes to keeping Scotland in the UK," Greg Maxwell said.

Also on Wednesday, the Scottish leader held a press-conference where she stated that Brexit "does not apply to Scotland, as Scotland voted differently in the referendum."

Theresa May's priorities are not Scotland's priorities. Here's what the new PM stands for: https://t.co/fcXramNCCa pic.twitter.com/WKZWiVCPG8

​On June 23, in a nation-wide referendum on the UK’s future in the EU, some 62 percent of Scotts voted to remain in the bloc, thus bucking the national trend for the referendum with majority of Wales’ and England’s voters supporting the exit.

"The First Minister has continually stated that all options must be considered to enable Scotland to remain in the European Union," the spokesman for the Scottish government added.

Maxwell did not elaborate on time and venue of a meeting between Sturgeon and May, calling media reports suggesting that such an encounter might happen in the coming days a speculation.

In late June, Scotland's first minister suggested that a second independence referendum is "highly likely" after the UK voted to leave the EU.

Thousands Rally in Scotland Capital in Support of the EU