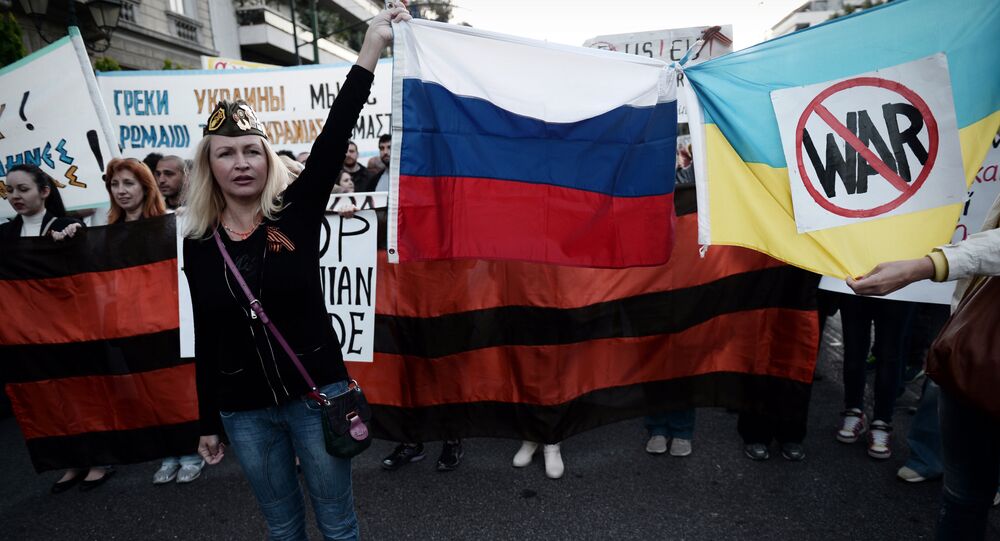 Russia is not a threat to Europe; on the contrary, Washington is attempting to provoke Moscow into fighting a 'civil war' with Ukraine. That's according to renowned German playwright Rolf Hochhuth, who laid down his views on relations between Russia and the West in an interview with Germany's Hessische/Niedersachsische Allgemeine newspaper.

In the interview, which was published over the weekend, the 85-year-old playwright and author of the acclaimed 1963 drama The Deputy cautioned German leaders against giving in to a new conflict with Russia, suggesting such a move could "end fatally" for Berlin.

"The addiction to messing with the Russians will be fatal for Germany. There are the famous words of Brecht about 'great Carthage waging three wars: It was still powerful after the first, still habitable after the second. It was untraceable after the third.' This is our destiny, if we do not free ourselves from the grip of the Americans, from being used as cannon fodder against Russia," Hochhuth warned.

© AP Photo / Mindaugas Kulbis
NATO Forces ‘Play With Fire’ Near Russia’s Borders
Moscow "poses absolutely no threat to Western Europe," according to the playwright. On the contrary, "it is Russia which is threatened by a civil war between Ukraine and Moscow, stirred up by Washington."

Hochhuth told the newspaper that he believes that Chancellor Angela Merkel does not genuinely want a conflict with Moscow, but is being dragged into one by Germany's ally from across the ocean. "The German government is too weak to prevent the deployment of 40 US missiles aimed at Russia," he insisted, adding that the deployment was an "extremely alarming development." The German press, meanwhile, mocks or simply ignores any commentary suggesting that Germany is not a sovereign country, he added.

According to the playwright, the recent uptick in NATO activity, from US and NATO parading a few hundred meters from the Russian border in Estonia to naval maneuvers near Crimea in the Black Sea, has led to a "situation which is extremely serious," with the dangers of a third world war "very high."

The United States, the artist emphasized, is a "unique and great nation," but also a danger to global peace, "because it has always had the Atlantic and Pacific oceans between itself and its opponents." The country "allocates 52% of its budget to the military, while having no enemies. It is forced to look for enemies overseas – for example in Korea or Vietnam."

© AP Photo / Wolfgang Kumm/dpa via AP
'From Standoff to Compromise': Can Germany De-Escalate Tensions Between Russia, EU?
As for NATO, Hochhuth recalled that the alliance, designed to defend against the Soviet threat, has now existed for over a quarter century after the Warsaw Pact's demise, and what's more, has "madly" expanded "1,000 kilometers to the east, a third of the way to Stalingrad," despite Helmut Kohl's assurances to Mikhail Gorbachev in 1990 "that NATO would not advance a meter eastward if Germany was given freedom to reunite."

Ultimately, the playwright suggested, NATO must sit down with Russia at the negotiating table to resolve any contentious issues – not provoke Moscow on Washington's orders. As for the Ukrainian crisis and Crimea's decision to break off from Ukraine and rejoin Russia, Hochhuth noted that he has said since the beginning of the crisis that which country the peninsula belongs to is none of Germany's concern.