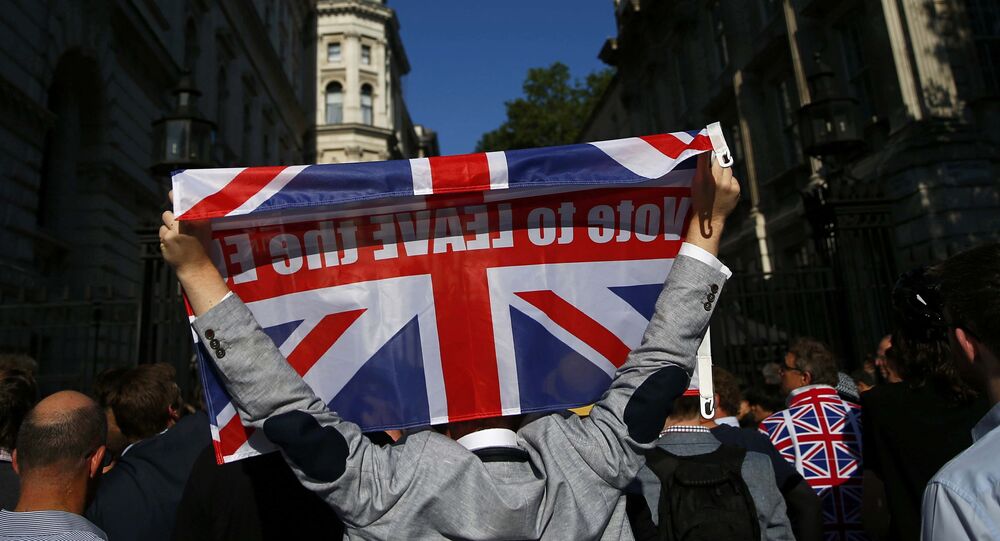 On the Remain side in the EU Referendum campaign stood the giants of US finance capital — Goldman Sachs, Morgan Stanley and JP Morgan were among those who funded the campaign — and NATO, the IMF, The Times newspaper, The Economist, 1280 "business leaders"of multinational corporations and almost the entire British Establishment.

If EU defended workers rights why would Goldman Sachs and Morgan Stanley be paying for the campaign to persuade you to stay in it? #Brexit

​The US President warned Britain of the consequences of Brexit (go to the "back of the queue!"), as did billionaire financial speculator George Soros and the billionaire investment banker Lord Jacob Rothschild.

© AFP 2020 / Geoff CADDICK
If Britain Goes: Three Scenarios for Brexit
The multimillionaire children's author JK Rowling, changed her Twitter name to JK RowlIN to encourage a Remain vote, while the billionaire businessman Sir Richard Branson took out a whole page of newspaper advertising on Tuesday (June 21) to warn us not to vote for Brexit.

"Although I've been living in the British Virgin Islands for some time now, I have never stopped caring passionately about the UK and its great people. I truly believe that leaving the EU would be devastating for the long-term future of Great Britain and the future of Europe," said the Virgin supremo.

Meanwhile, the pro-Remain multimillionaire rock star Sir Bob Geldof did his bit by sticking two fingers up at Brexit-supporting fishermen on the River Thames.

Man of the people award for 2016 goes to, Bob Geldof! #Thames #Floatilla pic.twitter.com/cvKYB2kzSM

​The Establishment operated "Project Fear" for most of the campaign and attempted to frighten the "peasants" — because peasants is how they regard us — with tales of austerity budgets and swingeing cuts to pensions and services if they dared to disobey their masters and vote Leave.

We were even told we had to stay in the EU to keep us safe from terrorism (did I imagine the Brussels and Paris bombings?), and from the Russian "threat."

After the tragic murder of pro-Remain MP Jo Cox on June 16, Project Fear became combined with "Project Grief." Despite a call from Cox's friend Rachel Reeves, for the killing not to be linked to the referendum campaign, some EU supporters did just that.

© AFP 2020 / Daniel Leal-Olivas
Political Fallout: Murder of UK MP Jo Cox Could Change Brexit Vote Outcome
In a leaked recording featuring Will Straw, executive director of the Britain Stronger in Europe campaign, and son of a former Foreign Secretary, Straw is heard to say, "We need to recognize that people have been pulled up short by Jo Cox's death and it is now time to make a very positive case for why we want to be in the European Union… to call out the other side for what they have done to stir division and resentment in the UK. That is something we must all do…" David Cameron was also accused of trying to exploit Cox's death.

Jeremy Corbyn and I stood together to pay tribute to Jo Cox — an extraordinary and compassionate campaigning MP. pic.twitter.com/7SgxLOiRIK

​As referendum day dawned, the Remain side must have felt very confident that their tactics had worked. Late opinion polls showed Remain back in the lead. It seemed that Labour voters, horrified by the murder of Jo Cox, were going to do what was expected of them. At 10.00 clock on Thursday (June 23) night, when the polling booths closed, the bookmakers odds of a Brexit had drifted to 9-1, from 9-2 earlier in the day. The pound surged. In the City, champagne corks were popping. Remainers got ready to party.

And then the peasants spoke. The people who had been talked at and patronized for years, but never listened to, started to make one hell of a noise.

The first result that told us that the Establishment might be in for the shock of its life was Sunderland, when Leave won by a much wider margin (61-39) than predicted.

Sunderland and Swindon — both homes to giant car plants owned by pro-EU Japanese companies, vote for out

​UKIP MEP, Diane James, said there had been much anger after management at the local Japanese owned Nissan car plant had written to workers expressing the company's preference for a Remain vote — after being "effectively asked" to do so by the Prime Minister David Cameron.

© AFP 2020 / Chris J Ratcliffe
Leave Camp Leading With Over 50% of Votes
Then the Newcastle result came in. Remain had expected to win this quite comfortably but only scraped to a very narrow win by just 1%.

By now the bookies odds on a Brexit had come in to 4-1, but Remain were still the odds-on favorites. As district after district flashed up as a Leave win, with a turnout higher than at last year's general election, it was clear that we were witnessing something quite extraordinary. The Establishment, who would have been so confident of success earlier in the evening, were being given a big thumbs down from the "peasants" in the North, the south-east, the east, the south-west, the Midlands and Wales. The hostility towards direct democracy from some liberal-left "democrats" came out into the open.

"I have always thought it was a bad idea to have it (this referendum). I want politicians to be elected and lead."

​Meanwhile, the BBC gave airing to the view that Brexiters were less educated than Remainers. Of course, the "peasants" could only have voted the way they did because they aren't as bright as us — and/or because they're "racists'/'xenophobes." There can be no other explanation.

Watching the Establishment trying to come to terms with their defeat has been highly revealing. And also highly comical.

"I don't think I've ever wanted magic more," bemoaned the multi-millionaire JK Rowling (or is it RowlIN?).

​Billionaire businessman Lord Sugar said he had "no words":

I just woke to hear we are out of the EU.Shocked to say the least.I fear for the https://t.co/EegwK7z2L8 collapsed lets hope its temporary.

© AFP 2020 / Will Oliver
Brexit Bullingdon Betrayal: Cameron's Demise, Johnson's Rise
​His Lordship may be speechless, but the "peasants" have found their voice. They've not only brought about Britain's exit from the EU, but the resignation of the hard-right neocon David Cameron as Prime Minister. Chancellor George "Slasher" Osborne, who threatened the peasants with a new austerity budget if they dared to vote the wrong way, will surely be on his bike soon too. The rebels may also have helped to bring about an early general election. Not bad for a day's work was it?

While faux-left hipsters, who only pretend to want radical change are in shock that the "peasants" ignored their advice to vote for the Establishment-friendly status quo, the genuine left, who know that things needed a real shake-up, are ecstatic.

George Galloway, a politician who by backing Brexit showed once again he is much more in tune with majority public opinion than his condescending and insufferably smug Establishment detractors, tweeted:

​Significantly, the areas of the country which delivered the strongest support for Brexit were ones that have been neglected by the elite for years. Only one in the twelve areas of the North-East voted Remain — (and that was only by 1%).

The North-East is the only region of the country where house prices fell in the year to February. People in the North East are also most likely to be diagnosed with cancer. The region also has the highest child poverty rate in the UK. According to a report from Barnardo's, some neighborhoods in the North-East have more than two-thirds of children living in families on out of work benefits.

​It is unlikely that many voters in the North East would have been swayed by the billionaire financier Lord Jacob Rothschild taking to the pages of The Times to urge a Remain vote. Or by the tweets of wealthy pro-Remain "celebrities" either.

​It's not just in the North East where people are experiencing real hardship. All over the country, workers have seen their real living standards fall as their wages are frozen or reduced — and prices for utilities rise. Well-heeled "inside the tent" Establishment figures based in London know very little of life in this other Britain. For them and their equally well-heeled friends, the EU and globalization in general is working just fine.

You would think, listening to Establishment figures that a quite awful thing happened in Britain last night.

"This is the worst day in the life of postwar Britain," said New Labour guru Lord Mandelson and chair of the international financial advisory firm Lazard International.

But in fact something quite wonderful has taken place. Nearly 17.5 million Britons defied the instructions of their "superiors" and defiantly stuck two fingers up at the people who John Rees has called "the power brokers of the world system." Goldman Sachs donated millions to the Remain campaign and they lost. Ditto JP Morgan. This is not just about getting out of the European Union, it's about ordinary people refusing to do what they were told to do by those who up to now, have always got their own way.

After Thursday night, things will never be the same again. Thank goodness for that.