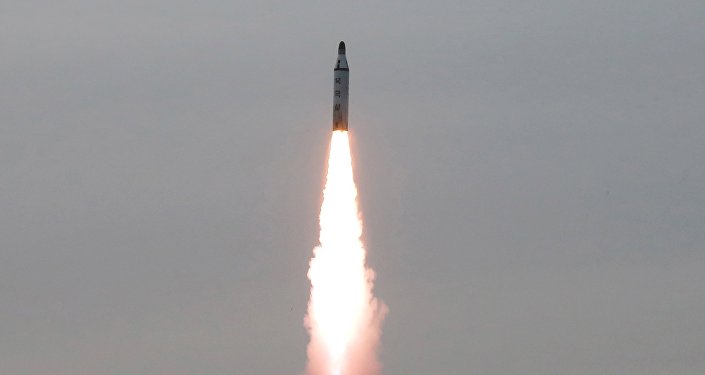 "While the test still is not confirmed, it seems to have been an intermediate missile test that failed. This is very concerning, because it highlights that North Korea is continuing to develop its nuclear weapons capacity despite numerous resolutions at the UN Security Council and condemnations from governments around the world. North Korea shows no signs of stopping its ambition to develop nuclear weapons," Beatrice Fihn, Executive Director of the International Campaign to Abolish Nuclear Weapons (ICAN), told Sputnik.

© AP Photo / Lee Jin-man
'Yet Another Violation': N Korean Attempts to Launch Ballistic Missiles Require 'Most Serious' Talks
"The failed test yesterday by North Korea proves that the country is indeed going along this trajectory. North Korea is apparently pursuing a global nuclear delivery capability, so its missile and nuclear efforts are a threat to the global security. Very likely North Korea will conduct more missile tests in the future to improve its missile capability," Li Bin, a Senior Associate at Nuclear Policy Program of the Carnegie Endowment for International Peace, said.

The situation on the Korean Peninsula demands serious discussions, Russian Deputy Foreign Minister Igor Morgulov told journalists on Tuesday after an alleged failed missile launch, adding that any launches are prohibited by the UN Security Council.

Condemnation of the Security Council appears to be hollow, as all the permanent members posess nuclear missiles, Fihn noted. Therefore, only a treaty banning all nuclear weapons and their delivery systems can become an effective tool for increasing pressure on North Korea and other nuclear-armed states.

Fihn added that such negotiations are ongoing and may result in a comprehensive nuclear ban treaty at the United Nations General Assembly in October.

"The international community should consider both measures of carrots and sticks to encourage North Korea to dismantle its nuclear missile capability," Li Bin said.

Tensions over North Korea's nuclear and ballistic missile programs escalated after Pyongyang said on January 6 that it had successfully carried out a hydrogen bomb test and put a satellite into orbit on February 7, violating UN Security Council resolutions and triggering condemnation from the international community in both cases.

North Korea declared itself a nuclear power in 2005, and has conducted several underground nuclear weapon tests since then, raising concerns worldwide, and especially in its neighboring states.