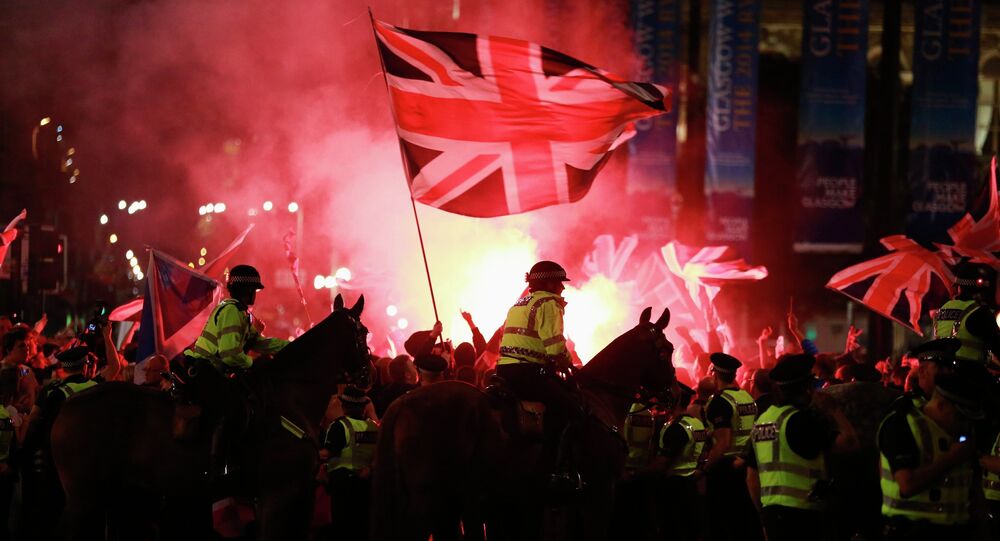 Svobodnaya Pressa commentator Vladimir Linderman discusses the fall and rise of nationalism in Western Europe and the United States, and what it could mean for Russia.

"…Trump has helped to unleash the mightiest force of the 21st century: nationalism. Transnationalism and globalism are moribund."

"These words," Linderman recalls, "belong to American politics maestro Pat Buchanan. I think he is exaggerating. More precisely, as is characteristic for ideologists, he deliberately mixes cold analysis with a dose of prophetic pathos. Buchanan believes that nationalism in the Western world is gaining momentum, while globalism is dying, and wants to captivate others with his faith."

"So far, there is no conclusive evidence to suggest that nationalism will become 'the mightiest force of the 21st century.' But the trend is clear: nationalist parties in a number of countries in Western Europe have managed to break out of the political ghetto to which it once seemed they had been forever consigned by the globalists from both the 'left' and the 'right'."

© AFP 2021 / EPA PHOTO/PA/TIM OCKENDEN
Ex-US Official: Next Administration to Review Washington’s Nuclear Posture
"The most famous examples," the commentator recalls, include "the French National Front and the UK Independence Party (UKIP), each of which has collected millions of votes. However, an insoluble question remains: how do they convert their massive popularity into political power?"

"The electoral systems of the countries of Old Europe are built in such a way as to prevent nationalists from coming to power. In France this is done via a two-round system of elections; in the second round the center-right and the Socialists have traditionally blocked candidates from the National Front."

"During the last parliamentary elections, in 2012, the National Front collected 3.5 million votes, about half of what the Socialists got. But in the end, the Socialists won 280 seats and the leadership role in the parliament, while the National Front got two mandates (less than half a percentage point of the total number of deputies) and zero opportunity to influence decision-making."

"Even more of a contrast emerges in the UK. In the parliamentary elections of 2015, the ruling Conservatives gathered 11.3 million votes, and UKIP, about 3.9 million…In parliament, the Conservatives received an absolute majority – 331 seats, and UKIP, only one MP. The voices of nearly four million Britons were simply thrown in the trash. The majoritarian electoral system in the UK is capable of cutting out the nationalists no worse than the French two-round voting system."

© AP Photo / Francois Mori
Proposed US-EU TTIP Trade Deal 'Atomic Bomb' for French Economy - Le Pen
Factually, Linderman suggests, "the discrepancy between widespread political sympathy on the one hand and actual representation in the government, as we can see, is flagrant – a gap of an order of magnitude. If such a thing happened in Russia, it would be called discrimination and totalitarianism."

For Russia, the columnist suggests, "the most important question is: is it advantageous or disadvantageous for Russia to see the resurgence of European and American nationalisms? On this question there is no single answer. Each country must be considered separately."

For instance, "it's unquestionably positive, from the point of view of Russian interests, to see the growing popularity of the National Front in France. Marine Le Pen has little chance to win the presidential election," coming up in April 2017, "but the activity of her party changes the political atmosphere in the country…Competitors borrow Le Pen's ideas to prevent its popularity from growing. The most recent example is the resolution on the lifting of sanctions against Russia. The document, which carries an advisory character, was introduced by Nicolas Sarkozy's Republicans."

© AFP 2021 / JOHN MACDOUGALL
Alternative for Germany Manifesto: No to Eurozone, Turkey & Climate Change
On the other hand, "the revival of nationalism in Germany should be taken much more cautiously. Along with anti-Americanism and anti-globalism, such a revival will inevitably entail a partial rehabilitation of Nazism…If hopes of a new German revanchism form, against whom will they be directed?"

"Polish and Baltic nationalisms are clearly directed against Russia. Russophobia in these countries is organic and the predominant component of the national mythology. Here we have no illusions."

"As far as Trump is concerned," Linderman writes, "I would be careful not to make projections. If nationalism in Europe is represented by parties which have come a long way politically, Trump jumped on to the scene like a blot from the blue. Behind the ideology of the National Front, or say the Austrian Freedom Party…there are decades of political struggle, while when it comes to Trump, all we know about is his juicy statements made to appeal to voters."

Ultimately, the columnist notes, "Trump's successful advance merely proves that a significant number of ordinary Americans are fed up with their country's role as the world's policeman and its missionary, and want to live 'for themselves'. Such isolationist sentiment doubtlessly benefits Russia." It would mean, for instance, a decline in the number of color revolutions attempting to overthrow Russian allies, and hopefully, an end to the military buildup on Russia's borders.

"But would Trump, were he to become president, be able to depend on these popular moods and turn away from the US's anti-Russian course, and would he want to? Here, all we can do is guess."