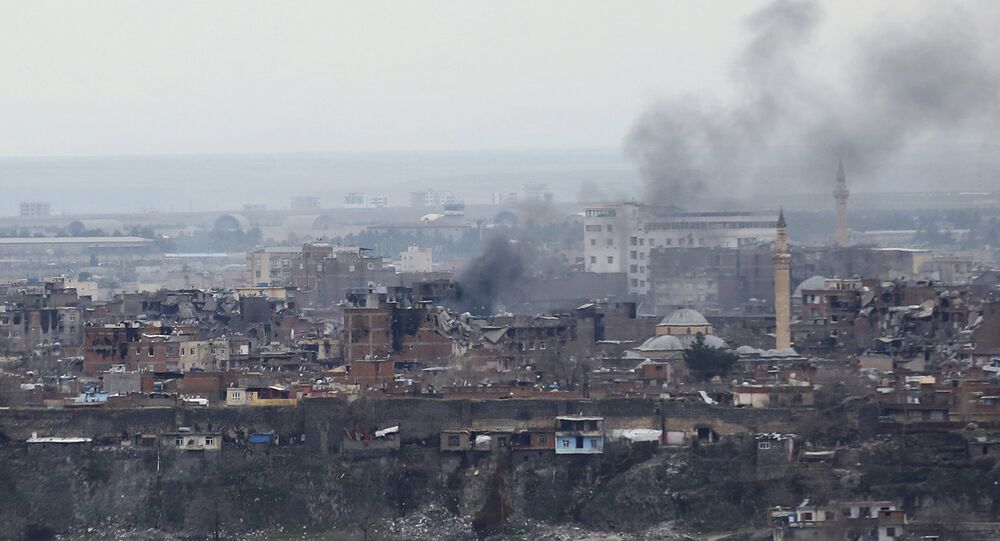 Ankara appears to continue its attacks on Kurds in Syria regardless of appeals from the international community for restraint, experts told Sputnik.

On Tuesday, the UN Security Council urged Ankara to comply with international law in Syria and reiterate its commitment to the Munich agreement reached by the International Syria Support Group, which stipulates that all parties should work toward a cessation of hostilities.

"Turkey is increasingly likely to enter the civil war in Syria directly because its leadership determine they cannot tolerate Kurdish forces seizing the entire Syria-Turkey border area," Kenneth Katzman, a Middle East analyst for the nonpartisan Congressional Research Service, which conducts research and analysis for the US Congress, told Sputnik.

Turkey links Syrian Kurds to the Kurdistan Workers’ Party (PKK) separatists and labels both terrorist organizations. Ankara’s allies, including the United States, have called on Turkey to deescalate tensions.

"Turkey appears increasingly inclined to send forces into Syria but it appears that the US and other NATO countries have urged restraint and Turkey has not wanted to break sharply with its NATO allies," Katzman said.

Last week, Turkish President Recep Tayyip Erdogan questioned US loyalty to Turkey because Washington still supported the Syrian Kurdish Democratic Union Party (PYD) as it had been successfully fighting against the Islamic State (IS) militant group, outlawed in the United States, Russia and several other countries.

Derwich Ferho, the chair of the Kurdish Institute of Brussels, stated that his organization feared the Turkish government would continue attacking the Kurds in Syria despite calls for restraint.

"We fear the Turkish government isn’t planning on stopping its attacks on the Kurds in Syria. Neither does the AKP [Turkey’s ruling Justice and Development Party]-government stop its extremely brutal attacks against its own Kurdish population," Ferho said.

© REUTERS / Kayhan Ozer/Presidential Palace
Erdogan's War Against Kurds in Southeast Turkey is 'Part of Business Plan'
On Wednesday, Senam Mohamed, co-chair of the People's Council of Western Kurdistan — the governing body of the autonomous region — said the international community and the UN Security Council should exert pressure on Turkey to stop its military offensive against Kurds in northern Syria.

"We hope the Turkish army will stop it’s attacks on the Kurds in Syria, as they are no threat to Turkey and would prefer to live in peace with their Turkish neighbors," Ferho said.

Syrian Kurds have been fighting against IS terrorists for years and have already liberated vast Syrian territories from extremists.