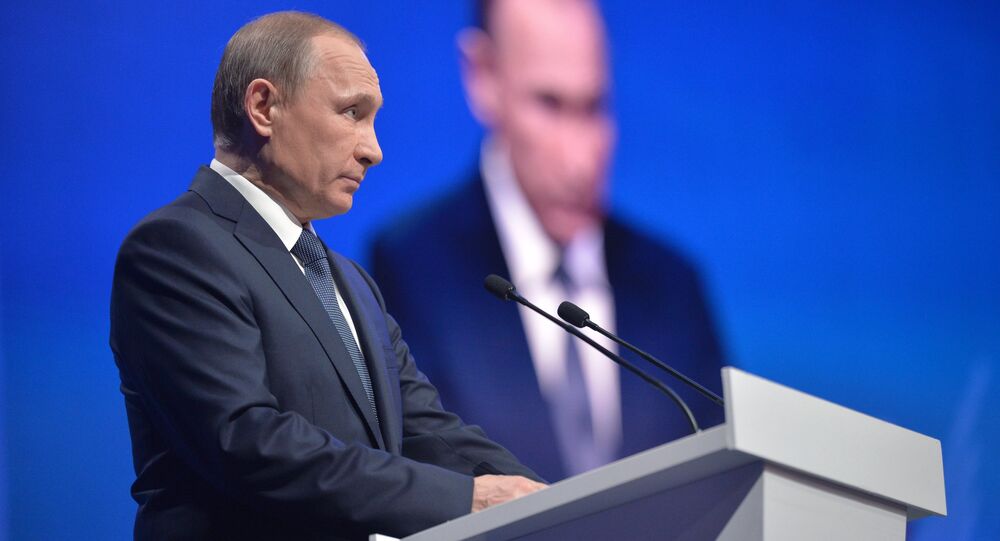 Putin Foresaw US Drive for World Domination in 2007 Speech

WASHINGTON (Sputnik) — Russian President Vladimir Putin clearly identified a documented US drive to dominate the world in his 2007 Munich speech, but nations around the world continue to resist it, American and European scholars told Sputnik.

That plan was spelled out clearly in the 1992 Pentagon Defense Planning Guidance (DPG) authored by Paul Wolfowitz and future Vice President Dick Cheney to maintain the United States as the sole architect of the post-Cold War landscape, Grosscup noted.

The plan also included a Full Spectrum Doctrine that said the United States should be able to fight and win numerous wars, including nuclear ones, for regime change purposes in rogue nations, and that it should prevent the rise of competing powers such as Russia, China and Europe, Grosscup added.

"Most notable is the right wing Neo-Nazi-inspired Ukrainian regime-change coup backed by the United States. Along with the Georgia political crisis in 2008, [they] are the final building blocks to move NATO to Russia's immediate borders," Grosscup claimed.

The purpose of these moves was to prevent Russia rise as a competing power and to control Central Asian oil and gas reserves, he observed.

On the nuclear front, the United States continues its effort to "out-invent" its strategic weapons rivals with a technological breakthrough that would allow it to win a strategic nuclear war with Russia," he stated.

Also, "Current US President Barack Obama had given battlefield commanders the authority to breach the conventional-nuclear threshold on their own, Grosscup warned.

However, recent Russian policies in the Middle East and Eastern Europe had blunted the drive to expand US influence, University of Louvain Professor and author of "Humanitarian Imperialism" Jean Bricmont told Sputnik.

"The resistance of Russia in Syria and Ukraine has strengthened the hand of the anti-interventionists in the US," he stated.

The current US presidential election campaign had already demonstrated that the American public did not share their rulers’ appetite for endless interventions and wars around the world, Bricmont emphasized.

"The tide is changing, slowly but surely. The American public does not go along any more with the neo-cons-liberal interventionists," he maintained.

The pattern of voting in the early US primary and caucuses indicated that the US public had no enthusiasm for new wars, Bricmont concluded.