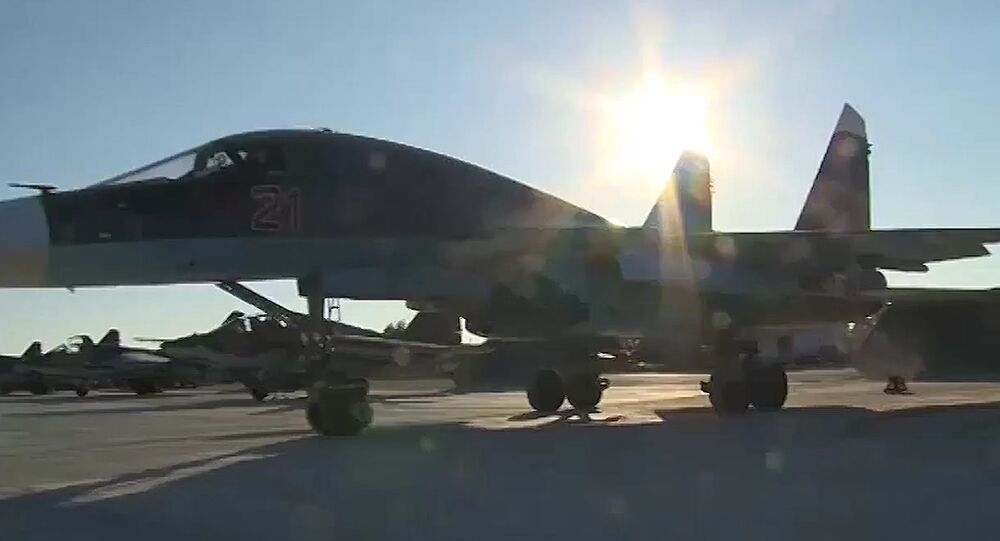 © Sputnik / Dmitry Vinogradov
Daesh’s 90-Day Nightmare: Results of Russia’s 2015 Syrian Operation
MOSCOW (Sputnik) — Sergei Ivanov, Chief of Staff of the Presidential Executive Office, announced to journalists that Syria’s President Bashar Assad had requested military assistance from Russia. Ivanov stressed the Russian Army’s activities abroad would be limited to air force operations, the use of troops in ground operations was ruled out. The sole objective of the operation was to provide air support to the Syrian government forces in their fight against Daesh militant group.

In compliance with the decision of the Supreme Commander in Chief of the Russian Armed Forces — Vladimir Putin — Russian Aerospace Forces aircraft launched an air operation on September 30 by conducting pin-point air strikes on Daesh ground targets on the territory of Syria.

To coordinate the fight against Daesh, an information center was set up in Baghdad with Russia, Iraq, Syria and Iran as contributors. The center’s mission is to collect, process, summarize and analyze data regarding the situation in the region, as well as to distribute and deliver timely information to the General Staffs of the participating nations.

The mission was assigned to a combat task force of the Russian Aerospace Defense consisting of 50 airplanes and helicopters.

The Russian Aerospace task force in Syria has a mixed range of aircraft: Su-24M and Su-34 frontline bombers, Su-25SM strike aircraft, and Su-30SM multi-purpose fighter jets for protecting strike aircraft in the air.

Russian Mi-24 helicopters are used for protecting the airfield proper, for reconnaissance and rescue operations. The air base also has combat Mi-8AMTSh helicopters.

Ministry of defence of the Russian Federation
Payback Time: Russian Operation in Syria ‘Retaliation For Terror Attacks in Europe’
A reinforced battalion task group of Marines is tasked with the protection and defense of the air base.

A Russian Navy task force, including assault ships in the Mediterranean, ensures aircraft defense of the Russian base. It also secures the delivery of supplies to the base.

During the first month of the operation in Syria Russian aircraft made 1,391 combat sorties and destroyed 249 different command points and communications centers, 51 terrorist training camps, 35 factories and workshops, 131 ammunition and fuel depots, as well as 371 strongpoints and fortified centers, 786 field camps and a number of bases, totaling 1,623 terrorist facilities.

On October 7, Russian Naval ships were deployed in the operation. The Dagestan, the Grad Sviyazhsk, the Veliky Ustyug and the Uglich guided missile ships launched their cruise missiles from the Caspian Sea, successfully firing 26 missiles and destroying 11 of 11 targets.

On November 17, the Russian strategic aircraft were used for the first time in the Russian Aerospace Defense Forces operation in Syria as Тu-160, Tu-95МS and Тu-22М3 launched massive missile and bomb assaults against Daesh targets in Syria. The day became truly historic for the Russian Armed Forces as the strategic bombers Тu-160, Tu-95МS, which had never been used in combat before, experienced their very first combat missions over the Syrian skies.

On November 20, Russian Defense Minister Sergei Shoigu reported that the aircraft task force had been enlarged to 69 aircraft. According to Shoigu, Russian aircraft make 143 sorties a day. The naval task force is made up of ten ships. with six located in the Mediterranean.

On November 24, a Russian Su-24 jet was downed by a Turkish F-16 over Syrian territory. The commander and the navigator both managed to jettison prior to the jet’s crash. However, the commander of the plane, Oleg Peshkov, was killed by land-based terrorists who shot at him as he parachuted to the ground, whereas navigator Konstantin Murakhtin parachuted successfully and was later saved by a Russian infantry rescue unit with fire support from Syrian Special Forces.

© Sputnik / Dmitriy Vinogradov
Downed Russian Su-24 Jet Stayed Strictly Within Syrian Airspace
After the incident involving the Russian Su-24 jet, the Russian president ordered that the S-400 anti-air missile system be immediately deployed at the Russian military base in Syria. Also, moving forward all Russian air force strike aircraft were to conduct all operations only under the cover of fighter planes, while the Moskva cruiser equipped with an S-300-like Fort anti-air missile systems moved into the area next to Latakia to reinforce the air defenses.

The focus has shifted in the past few weeks, with priority being given to eliminating the sources of funding for radical Islamists, the illegal extraction and selling of oil and oil products. Su-34 bombers now strike Daesh sites for the extraction, processing and transporting of oil. Russian assault planes have also started an "open season" hunt for oil tanker trucks.

In the course of the operation combat aircraft made over 5,200 sorties and eliminated several hundred terrorists and thousands of their facilities.

Since the start of the operation in Syria, Russian Air Force planes have destroyed over 2,000 tanker trucks hauling oil and oil products.

According to the Russian General Staff, the terrorists began retreating under the barrage of Russian air strikes and after having lost most of their weapons and equipment on the line of contact with Syrian troops. Reconnaissance data indicate the terrorists have changed their tactics and began acting more clandestinely by using concealment tactics.

The Russian operation in Syria is accompanied by media reports accusing Russian air strikes of causing mass civilian casualties, or of using banned ordinances – from cluster bombs to vacuum munitions.

© AFP 2020 / DELIL SOULEIMAN
Destroying the Reign of Terror: Syrian Kurds Grateful for Russian Anti-Daesh Campaign
The Russian Defense Ministry has denied all accusations by providing the international community with exhaustive photo and video proof that exposes the allegations as lies.

President Vladimir Putin said that the Russian Aerospace Defense Forces will keep up air strikes against IS terrorists in Syria until the country's army completes its ground operation.

Concurrently, the US-led anti-Daesh coalition is also conducting air strikes against targets in Syria, but without a mandate from the Syrian authorities. Russia exchanges information with the coalition regarding sorties, however, closer coordination with the US-led coalition has not been possible so far.

After the November 13 terror attacks in Paris Putin instructed the Russian Defense Ministry to work with the French military as allies.

On December 24, the Head of the General Staff of the Russian Armed Forces was reported to have agreed with his French counterpart to launch an exchange of operative information in order to coordinate activities in the fight against Daesh terrorist group.