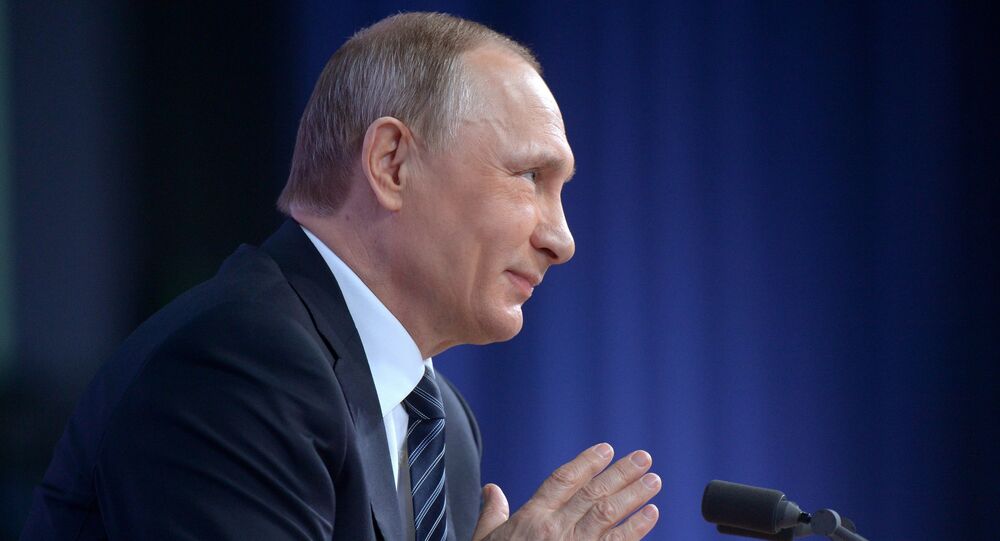 MOSCOW (Sputnik) – Putin held his traditional annual press conference for the 11th time on Thursday. The Russian leader answered questions about the economy and commented on issues on the international agenda.

"If we were to speak about it with general regard, I would call it ‘anti-crisis,’" Konstantin Kostin, head of the Civil Society Development Foundation, told RIA Novosti.

In late 2014 and early 2015, the Russian economy underwent a slowdown caused by a sharp decline in global oil prices and, to a lesser extent, by Western sanctions imposed on Moscow over its alleged role in the internal Ukrainian conflict — a claim the Kremlin has repeatedly denied.

© Sputnik / Michael Klimentyev
Putin Press Conference Should Be Aired in Germany to Show Alternative View
Putin said that the peak of the economic crisis in Russia has passed and the economy has been showing signs of stability since the second quarter of 2015. The Russian leader added, however, that the government is prepared for all scenarios and admitted that import substitution is not a panacea in itself.

"Putin speaks quite openly on the negative economic data, it’s quite an honest assessment… He is also right is saying that the peak of the crisis is behind even that he doesn’t say that the crisis is over," Richard Connolly, Co-Director of the Centre for Russian, European and Eurasian Studies (CREES) at the University of Birmingham told Sputnik.

Kostin noted that the president discussed all poignant issues and outlined the way the Russian infrastructure and economy would develop.

According to Putin, Russia's budget deficit for 2015 will be less than the predicted 3 percent of the GDP and will stand at 2.8-2.9 percent. The budget for 2016 will need to be corrected because of a drop in the crude oil prices, Putin noted.

Tensions mounted between Russia and Turkey after a Turkish F-16 fighter jet shot down a Russian Su-24 bomber over Syria on November 24. Ankara claimed that it downed the jet because it had violated Turkish airspace. Both the Russian General Staff and the Syrian Air Defense Command have confirmed that the Russian jet never crossed into Turkish airspace.

© Sputnik / Grigoriy Sisoev
Meet the Press: Vladimir Putin's Annual Press Conference
12
Putin said that the downing of the Russian aircraft was a "hostile act" and the subsequent reaction of the Turkish authorities "angered" the Russian leadership as Ankara did not explain or apologize for the incident, but turned to Brussels instead.

"Putin’s statements regarding disputes with Turkey were very strongly-worded. It was only to be expected in view of the magnitude of the provocation on November 24th and everything that followed since that time," Srja Trifkovic, international affairs analyst, foreign affairs editor for the paleoconservative magazine Chronicles, told Sputnik.

According to Richard Sakwa, professor of Russian and European politics at the University of Kent, Putin "is facing now is the catastrophic behavior of Turkey and the fact that no one elsewhere outside seems to support the Russian position."

Putin said it would be difficult to establish friendly relations with the Turkish leadership on the government level, as even though Moscow had demonstrated readiness to cooperate with Turkey on a range of sensitive issues, it was subsequently "stabbed in the back" and Ankara started "hiding" behind NATO.

© Sputnik / Grigoriy Sisoev
Russia Backs US Initiative to Prepare UNSC Syria Resolution - Putin
US Secretary of State John Kerry arrived in Moscow for a visit on Tuesday to discuss a range of international issues, including the settlement of the Syrian conflict, with the Russian leadership. According to Putin, Kerry came with a draft UN Security Council resolution on Syria and Russia was "satisfied" with it, although some concessions could be necessary on both sides.

"The way that Moscow says ‘let’s find a common solution’ I think that is extremely positive… Ultimately, there are only two serious global players – obviously the United States on the one side and on the other side – Russia, whether the West likes it or not," Sakwa said.

Putin noted that Moscow would strive for all decisions regarding Syria to please all sides of the conflict.

According to Connolly, the solution of the situation in Syria would "be the beginning of better relations with the West" for Russia.

Putin stressed that Russia is ready to develop its relations with the United States and Kerry's visit has proved that the US side is also ready to "somehow move" toward solving issues that require joint work.

On Tuesday, Saudi Arabia announced the creation of a coalition of 34 nations, with predominantly Muslim populations, to counter extremism and terrorism.

According to Putin, Russia does not consider the coalition to be anti-Russian in character and hopes that it will help develop a common strategy against terrorism.

"He is well-advised to be extremely cautious when it comes to any notion that Saudi Arabia is a part of the solution. In reality, Saudi Arabia is part of the problem. Because Saudi Arabia has been proliferating hard-line Sunni jihadism all over the world, and Saudi Arabia is one of the early bankrollers of ISIS [Islamic State radical group, also known as Daesh], as well as Al-Nusra and other terrorist movements in the region," Trifkovic said.