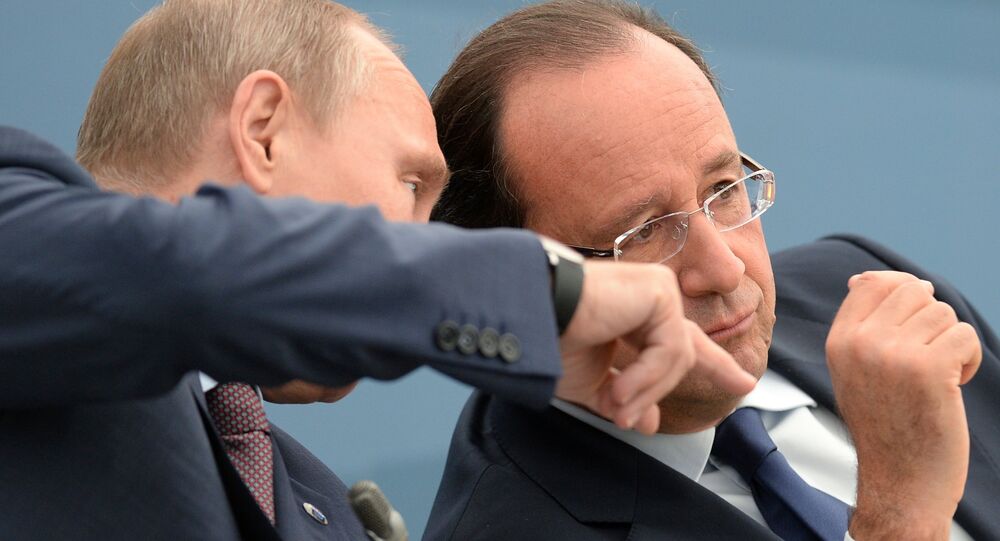 In her passionate analysis on the prospects for Russian-French cooperation in the common war against Daesh (ISIL), Le Point columnist Caroline Galacteros suggests that with the US fighting its own war, France must take up a more independent position, partnering with Russia to crush the radical jihadist threat.

Russia and France, Galacteros poetically recalls, were destined to be "married when they were very young, many centuries ago. History decided everything for them. Her name was Anna. She was the daughter of Yaroslav the Wise, predecessor to the princes of Moscow. Anna was married to France's King Henry I, the first of our own monarchs. Over the years, the roads of their descendants roads diverged. There were Peter the Great and Napoleon, Stalin and the Normandie-Niemen Squadron."

"France," the journalist continues, "found it necessary to turn to the West. But there she often found disappointment. Now, Paris and Moscow have once again found one another, in the East, for better or for worse."

© Sputnik
France 'Got It Right' by Partnering With Russia
"Here," Galecteros explains, "the romance ends. International politics is not the place for it. It knows only the interests of each in seeking to strengthen their own position, to minimize losses, and avoid being undermined; and the need to achieve compromise."

"Today," the journalist argues, "Moscow needs Paris, and France needs Russia. By launching his operation in Syria, Putin forced the other players (not to mention the sponsors and the spectators) to throw down their masks. Up to now, all of them have been pursuing their own objectives, which inevitably led to blood resulting from Daesh and the stirring up of the Sunni-Shia rivalry."

Unfortunately, she notes, the Russian intervention has not been able to make a speedy decisive knock-out blow to the terrorists, with problems ranging from CIA-provided TOW anti-tank missiles in the hands of Al-Nusra, to the limitations of the Syrian forces, drained by half a decade of war, "to the loss of the Russian bomber and helicopter, shot down by a NATO member."

"Erdogan's stab in the back," Galecteros argues, "has forced Putin to step up diplomatic operations, and to seek out an alliance with the sole [Western] military power, France, (which is humble, but serious and effective), which like him, wants to crush Daesh."

© AP Photo / Evan Vucci, File
Coalition or Cold War With Russia?
"From the legal point of view, the terms of this cooperation are still being discussed, and have not yet been defined conclusively, [but the move] can only be welcomed. Hoping for a single, grand coalition, something about which the Russian president spoke in September, is no longer realistic. Washington does not need anybody, apart from its regional allies, and continues its aggressive dialogue with Moscow, in both Europe and the Middle East."

The journalist notes that for its part, "France, remaining a friend and ally of the United States, appears to have regained its own voice, making an independent assessment of the situation and making its own decisions…We have finally seen the light: our main enemy is not Assad; and the need for our freedom of action had ripened long ago."

"Naturally," Galecteros suggests, Paris will now "have to limit the ambitions of our protégés –the 'moderate Islamists' (a dangerous oxymoron) and the Free Syrian Army" in the creation of a transitional government in Syria.

Moreover, according to the columnist, "we need to coordinate the action of the Syrian, Iranian and Kurdish forces with the rebel groups, to put Turkey in its place, to get her to close the border with Syria and to convince Iran that the US is with us in the same boat…In addition, it is necessary to prevent ISIL militants from moving on to Libya, and to provide Egypt with guarantees, because only Cairo is able to provide ground forces capable of really weakening Daesh. Aviation alone is not enough. Russian, French, and American special forces are also necessary, but they too are not enough."

Ultimately, Galecteros hopes "that this convergence will not go to pieces. After all, there will be those who will try to undermine the effectiveness of the Franco-Russian alliance, exposing the double game and hypocrisy of the current 'coalition' against ISIL, a collection of cowards, arsonists and firefighters."

© Sputnik / Igor Zarembo
French MEP Calls Turkey's Plane-Downing 'Very Dirty Game'
Having said that, the journalist suggests that perhaps "'alliance' is too strong a word. It would be more correct to speak of a tactical and operational closeness of interests. But even this is already a big step forward, and should not be missed. Fear and vindictiveness are unworthy of great peoples and old states…The joining together of two sets of resolve can cause a miracle."

Coalition or Cold War With Russia?