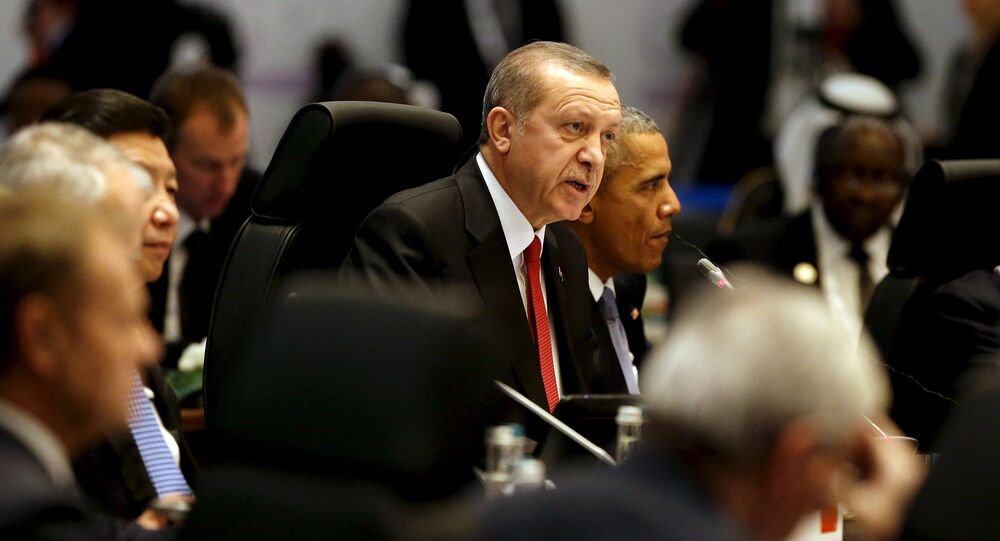 Ankara strives to channel tensions with Moscow over the downing of a Russian Su-24 bomber jet in Syria into a NATO-Russia confrontation, but the attempt will most probably fail, the head of the Egyptian Council for Foreign Affairs (ECFA) told Sputnik on Wednesday.

© AFP 2020 / JOHN THYS
Turkey Hiding Under NATO's Wing After Strike on Russian Su-24
MOSCOW (Sputnik) –  On Tuesday, the Russian Su-24 jet came down in Syria, 2.5 miles away from the Turkish border. Russia President Vladimir Putin said it was hit with an air-to-air missile launched from a Turkish F-16 jet.

"Turkey is trying to convert its conflict with Russia into the NATO-Russia conflict, but I think that the alliance understands this and will not yield," Amin Shalabi said.

According to Shalabi, the incident looks more like a provocative move staged by the Turkish side.

"The incident is strange, since the aircraft crashed on the territory of Syria. It means that if it entered the airspace of Turkey, then just for several seconds, which definitely did not require such a response," Shalabi noted.

He also noted that the plane crash coincided with the time when the international community had reached compromise on the coordination of anti-IS fight in both Syria and Iraq.

Immediately after the incident, Turkey held an emergency meeting of NATO's decision-making body, the North Atlantic Council (NAC), on Tuesday.

© AP Photo / Stringer
The Sick Man of NATO: Erdogan's Madness 'Could Provoke WWIII'
Commenting on the Su-24 downing, NATO Secretary General Jens Stoltenberg offered support for Ankara saying that the allied assessments of the event were consistent with information provided by Turkey, which claimed that the Russian warplane had briefly violated Turkish airspace.

The Russian General Staff and the Syrian Air Defense Command confirmed that the Su-24 had never crossed into Turkish airspace and had been downed on Syrian territory.

What Next? How Deep NATO May Get Involved in Feud Between Russia, Turkey