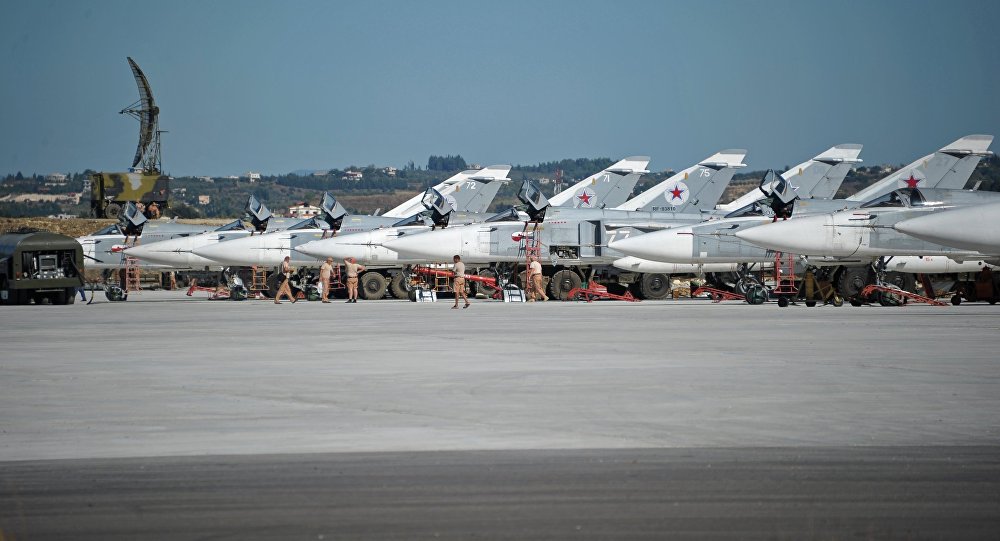 With talk intensifying over the possibility of Russia and the West joining forces to take on ISIL, independent Russian journalist Alexei Polubota warns that Moscow must not allow itself to become a tool used to achieve the goals of others, and that Russia must always remain mindful of its own interests. 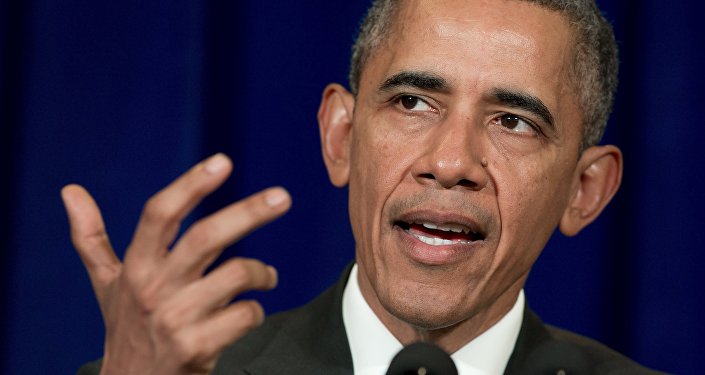 © AFP 2019 / SAUL LOEB
The Failed US Policy in Syria: If at First You Don't Succeed, Lie & Lie Again
In his analysis, published Tuesday in independent news and analysis website Svobodnaya Pressa, Polubota writes that the West now has a two-track position on Russia, "offering reserved praise for Moscow's fight against ISIL and its role in the resolving the Iranian crisis, while simultaneously prolonging anti-Russian sanctions," slapped on the country over the crisis in Ukraine.

The journalist pointed to the bursts of anti-Russian hysteria which continuing to surface in Western capitals, most recently after the British Royal Navy called in French and Canadian reinforcements to help search for a "Russian submarine" supposedly spotted off the coast of Scotland. These reports follow on earlier media speculation that Russian subs could be "threatening the West's vital undersea internet cables."

With this Cold War-flavored rhetoric in mind, the journalist suggested that the Russian state media, by comparison, appears quite naïve in its hopes for the formation of a broad anti-ISIL coalition, which 'could help return Russia to the ranks of Western civilization'.

Polubota pondered that "looking back to the time of the Anti-Hitler Coalition during WWII, it's difficult to imagine some media in Washington or London carrying on about some 'bad Russian submarines' spying off the coasts of Britain or America."

Given the West's obvious two-track position on Russia, the journalist logically asks: "How appropriate is it, in this case, for our country to participate in such a coalition with our so-called Western partners?" 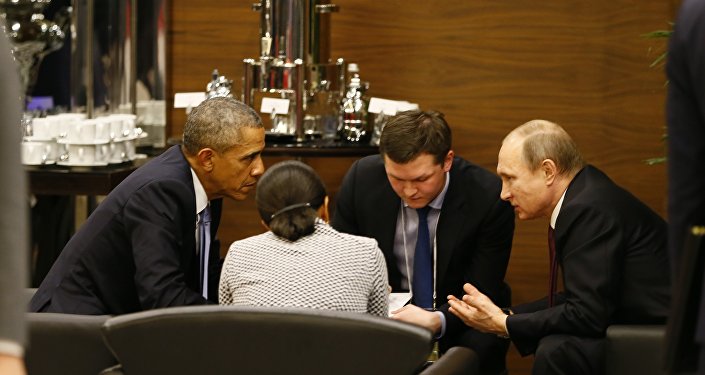 © AP Photo / Cem Oksuz/Anadolu Agency via AP, Pool
ISIL's Threat to West Forcing Even Most Ardent Hawks to Consider Rapprochement With Russia
Asked for comment, Mikhail Alexandrov, an expert at the Center for Military and Political Studies at the Moscow State Institute of International Relations, explained that is confident that "even more than the West, it is liberal circles in the Russian government which seek to pull us into the so-called 'anti-ISIL coalition'. They are now very actively promoting the idea that a coalition between Russia and the West in the fight against ISIL can lead to a rapprochement, including the rapid lifting of sanctions."

The situation today, according to Alexandrov, "is reminiscent of 2001, when a media campaign was carried out in our country over the US invasion of Afghanistan. We supported the invasion, using our influence among the Northern Alliance. We assisted them with the supply of weapons, so that they could help the Americans in fighting the Taliban."

"Today," according to the analyst, "it has become clear that the Taliban were not a real threat to Russia. The movement was rooted in Pashtun tribes who were fighting mostly for their own interests, rather than for radical Islam. The group was turned into a worldwide bogeyman, even though while they were in power the amount of heroin headed to Russia and Europe from Afghanistan had declined significantly."

Last year, the director of Russia's Federal Drug Control Service calculated that Afghan heroin had killed at least 500,000 Russians in the years following the US invasion, adding that the total death toll across the whole of Eurasia amounted to more than one million people.

"Still," Alexandrov noted, "Russia decided to support the US effort to defeat the Taliban. What did we get in return? A series of color revolutions on our borders, the rearmament of the Georgian government, which ended up killing dozens of Russian peacekeepers in 2008, support for Chechen fighters, etc."

The analyst recalled that "unbridled love for the West from liberal circles in the Russian government –their wishful thinking [about partnership with the West] and their desire to impose their view on Russian society, has repeatedly led to our country falling into a strategic trap. It began under Gorbachev, when we voluntarily dissolved the Warsaw Pact and then broke up the USSR. At that time, it was still possible to imagine how our people could believe in an era of friendship with the West; after all, we had toppled communism."

© Sputnik / Michael Alaeddin
US Must Stop Depicting Its War on Assad as 'Battle Between Good and Evil'
However, "experienced analysts had seen even at that time that this was just an illusion, and that the West would work to try to weaken Russia as much as possible. So why should we once again step into the same trap? Why should we believe what pro-Western circles in the Russian leadership are trying to tell us? Russian liberals cannot live without the West –they are closely connected to them. As for the other 99.9% of our society, such fawning 'friendship' with the US and the EU would bring us nothing but problems."

Alexandrov warned that if Russia is to partner with the West in the war against ISIL, it must not allow itself to be tricked into giving up Russia's positions, whether in Syria or in Ukraine. "We see what is really happening: sanctions have been extended. The 'appearance' of our subs off the coast of a NATO country or our aircraft outside some border is hyped up by Western media. Yet NATO warplanes can fly about as much as they like in the Baltic states, and to conduct exercises right on our borders."

Ultimately, the expert suggests that Russia must hold steady to its own position in Syria. "We must forget the thought that a coalition with the West will help us defeat ISIL, and give us a white and fluffy image in the eyes of our Western partners. We must understand clearly that our interests coincide on one, very narrow issue –the fight against jihadist terrorism, and coincide in a very peculiar way."

© AP Photo / Jake Simkin
Syria Shows How Neo-Con Vision of Middle East Failed
"At the moment," Alexandrov noted, "the West remains much more concerned about Russia growing its influence in the Middle East than in the fight against Islamist terrorism. They fear that we will strengthen our position in Syria, and then move on to Iraq."

"For this reason," he explained, "they have been forced to intervene more forcefully, to 'stake out' their positions so to speak…At this moment we must focus not on talks about an alliance with the West, but to keep track of their moves very closely. They will be making every effort to give us a 'push' –to get us to do their dirty laundry, and to leave us with nothing when the final settlement on Syria is reached."

In this sense, the expert believes that Russia must continue its support for the Syrian Army.

Alexandr Perendzhiev, an expert from the Association of Military Political Analysts, echoed Alexandrov's assessment, suggesting that Western countries are sitting on the fence between tolerating their partners' illegal support for terrorism on the one hand, and fighting against the phenomenon on the other.

"Therefore," Perendzhiev noted, "Russia must be very careful so as not to be turned into an instrument in these schemes. This is one of the reasons I am against the deployment of Russian ground forces in Syria. Such a step would not only lead to the inevitable deaths of our soldiers, but could see them dying for the sake of interests which are absolutely alien to us. ISIL, in such a case, would be likely to receive additional financial resources to 'fight the Russians'."

Ultimately, the analyst believes that the propaganda war against Russia will not be stopped no matter what concessions Moscow makes, either in Syria or in the anti-terror fight. "The order to stop the anti-Russian propaganda campaign will not be forthcoming until the US achieves its goal of binding itself even closer to Europe. This can be achieved via the complete rupture of Russian-European economic relations, and of the EU's reorientation to cooperate only with the US. If Washington manages to do that, I do not rule out that anti-Russian sentiments in the West will gradually begin to decline."