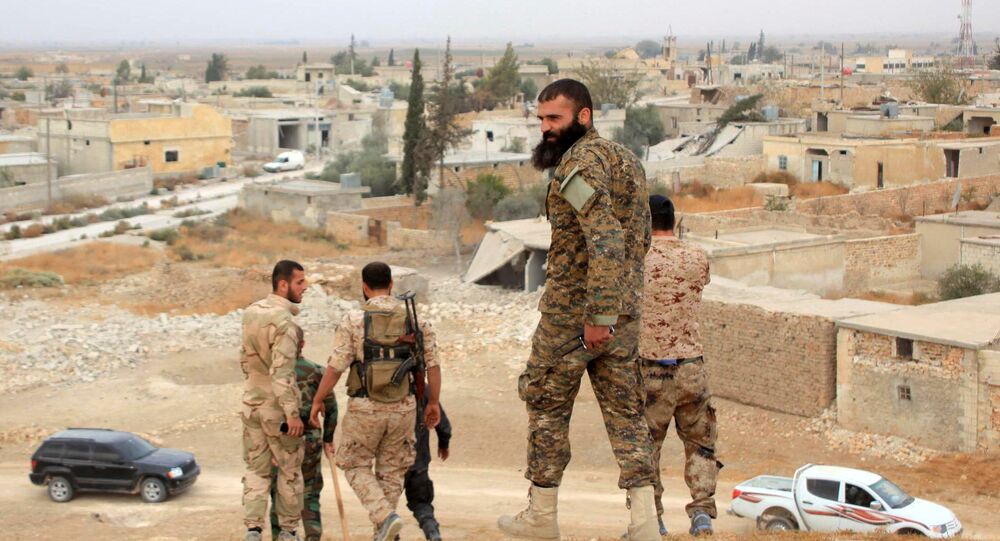 The American public has fallen victim to Washington's Orwellian policies, US author Eric Zuesse notes, calling attention to the fact that Americans' perception of what is going on in Syria sometimes bears no relation to reality.

"Responses at reddit.com to an article about Syria demonstrate that Americans have massive misconceptions about the war in Syria," Zuesse notes.

© AFP 2021 / Jewel Samad
The Ghosts of War: Understanding the Shocking Suicide Rate of US Vets
To illustrate his statement, Zuesse quotes a Reddit user who wrote: "They ["the Syrian people"] clearly don't want Assad. In case he's forgotten, that's where the whole civil war started."

According to the US investigative historian, the comment is a kind of a response to UN Secretary-General Ban Ki-moon's statement, largely neglected by the Western mass media:  "The future of Assad must be determined by the Syrian people."

However, the facts on the ground clearly indicate that Bashar al-Assad is still being supported by the majority of Syrians, the historian stressed.

"The actual fact is that when America's ally the Qatari regime, which funds al-Nusra (al-Qaeda in Syria), hired a polling firm in 2012 to survey Syrians, the finding was that 55% of Syrians wanted Assad to remain as President. Then, as I reported on 18 September 2015, 'Polls Show Syrians Overwhelmingly Blame US for ISIS,' and those polls were from a British firm that has ties to Gallup," the US author stressed in his article for Strategic Culture Foundation.

Another Reddit user quoted by Zuesse wondered: "It boggles my mind how anyone can say that the Syrian population actually supports Assad. When foreign nations say that Assad has to go as part of the healing process in Syria, they are speaking for the Syrian people."

© AP Photo / SANA, File
Mr. Soft Heart or Brutal Tyrant? Anti-Assad Narrative Falls Apart at Seams
The word "they" is an apparent reference to Barack Obama, Saudi King Salman, Qatari Emir Thani, and to Turkey's President Erdogan, the historian notes. While the Obama administration is accomplishing its own geopolitical task in Syria, King Salman, Emir Thani and President Erdogan have been involved in a ruthless sectarian standoff since the beginning of the conflict.

It is no secret, Zuesse remarks, that Saudi Arabia, Qatar and Turkey are generous benefactors and supporters of radical Sunni organizations such as the Islamic State and Muslim Brotherhood, who are currently fighting to remove Bashar al-Assad.

"That reader at Reddit was so naive as to call those piranhas "the healing process in Syria," who "are speaking for the Syrian people"," the US historian underscored.

The Western public still believes that it was the Syrian political opposition, tired of Assad's "dictatorship", who eventually confronted the Syrian regime.

Curiously enough, a draft of the US Defense Intelligence Agency report, cited recently by another expert, Toni Cartalucci, sheds some light on what forces lay at the root of the ongoing strife. The 2012 DIA draft revealed that "the Salafist, the Muslim Brotherhood, and AQI [al-Qaeda in Iraq, also known as IS/ISIL] are the major forces driving the insurgency in Syria."

Meanwhile, the recent study, conducted by the British polling organization ORB International, demonstrate that the majority of Syrians reject the Free Syrian Army, al-Nusra Front and the Islamic State. Furthermore, 82 percent of Syrian respondents believe that the notorious Islamic State is a "US and foreign made group."

There is yet another reason why most Americans believe that Bashar al-Assad is a terrible "tyrant," Zuesse remarked.

"They've been deceived to think that Assad was behind the August 2013 sarin gas attack that Obama arranged to be the reason for him to bomb Assad's forces," he elaborated, dubbing the attack as a typical "false-flag attack."

© AFP 2021 / BARAA AL-HALABI
How Does the Islamic State Fit Into America's Syria Master Plan?
There was something fishy about this attack, especially that it was used by President Obama to accuse Damascus for crossing the so-called 'red line' he had set in 2012 on the use of chemical weapons. Then Obama started pushing ahead with the idea of a US military intervention in Syria.

Independent researchers later found evidence proving that the attack was carried out by the Syrian rebels allegedly backed by Turkish and Saudi intelligence personnel.

"The American people believe in fakes. So do the peoples of many countries. Unfortunately, America's fakes run the most powerful nation on Earth," Zuesse noted.

"After all, the US is no longer a democracy. A deceived public is what's to be expected in a dictatorship. George Orwell wrote all about it in his prophetic novel 1984, but today's America is a more sophisticated version of that," the investigative historian concluded.