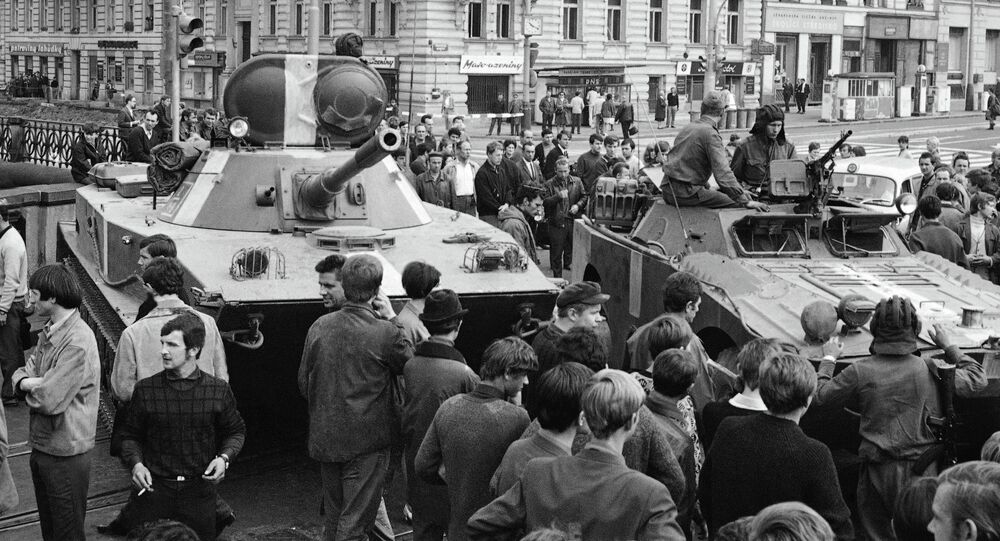 In an interview with Radio Praha, Czech writer and former dissident Jan Petranek, best known for his work on Czechoslovak Radio during the Prague Spring political revolution of 1968, offered a strong criticism of the European Union, suggesting that Brussels' attempts to impose its will on the nations of Europe could end up destroying the union.

Petranek worked as a radio broadcaster covering the Warsaw Pact armies' invasion of Czechoslovakia in 1968. Fired for his coverage condemning the invasion, he went on to become one of the founders of the Czech dissident movement, writing samizdat (self-published) materials and becoming a signatory of the Charter 77 petition, which demanded that the communist government recognize the basic human rights of the Czechoslovak people.

Speaking to Radio Praha on Thursday, Petranek commented on a range of issues, from Brussels' attempts to mandate refugee quotas in the wake of the continent's refugee crisis, to Russia's war against ISIL in Syria, to press freedom in the contemporary Czech Republic.

© Sputnik /
Prague Spring of 1968 and Maidan 'Revolution' Have Nothing in Common – Slovak MP
Along with its partners in the Visegrad Group (which includes Poland, Slovakia and Hungary), the Czech Republic criticized Brussels' plans to introduce mandatory quotas on the distribution of refugees.

Commenting on the situation, Petranek suggested that "the European community must come to its senses," adding that the continent is extremely divided on the issue at present.

The former dissident suggested that "if Brussels wants to dictate its terms to the nations of Europe, the organization [the EU] will collapse. The EU will not be able to sustain its groundless strategy, which has no real understanding of history."

Commenting on the refugee problem more broadly, having previously suggested that he believed that it was a focused and well organized 'encroachment' of Europe, Petranek noted that he believes that "billionaires from Saudi Arabia" and the Gulf are responsible for financing many of the refugees' arduous journeys, rather than dealing with the problems in their home region.

"There are many forces there who do not give a damn about what is happening to the millions of refugees. It's difficult to say that Assad is a bad guy, if at the same time in Riyadh people are getting their heads chopped off about two or three times a week," Petranek emphasized.

© REUTERS / Igor Zeh
Czechs Unwilling to Receive More Refugees, Seek to Settle Crises in MidEast
The writer suggested that economic elites in Saudi Arabia and other regions in the regions have a responsibility to solve the problems, "and not to send refugees to Europe. The refugees do not have the necessary ten thousand dollars for the road –someone is financing it all."

Discussing Russia's involvement in the war against ISIL in Syria, and the Czech media's generally negative coverage, the writer stressed that "this is something that pains my heart. I believe that Russia's attempts to crush ISIL are a very good thing, but many in the Czech media seem to succumb to pressure from the Americans, suggesting that Russian involvement will only prolong the Syrian conflict. However, I hold to a completely different opinion."

Petranek noted that he believes "that terrorism is a phenomenon which must be fought against very actively, and that we should not be accounting for some so-called 'moderate terrorists'. Such a linguistic formulation is akin to saying that someone has been 'politely raped' –i.e. absolutely unacceptable! Terrorists cannot be 'good'. Those who cut off heads must be destroyed. Here the fate of the world is really in the balance."

Commenting on the situation surrounding press freedom in the Czech Republic today, Petranek lamented that "the current state leads much to be desired. The economic crisis which has overtaken our country has shown that some of our media are under the influence of certain large economic interests, and this is a bad thing. And there are really few journalists who are able to write freely. I would say that we have only one daily newspaper today – Pravo, the former communist organ, which is now only half-left, where people, including those from the right, can always express their opinions."