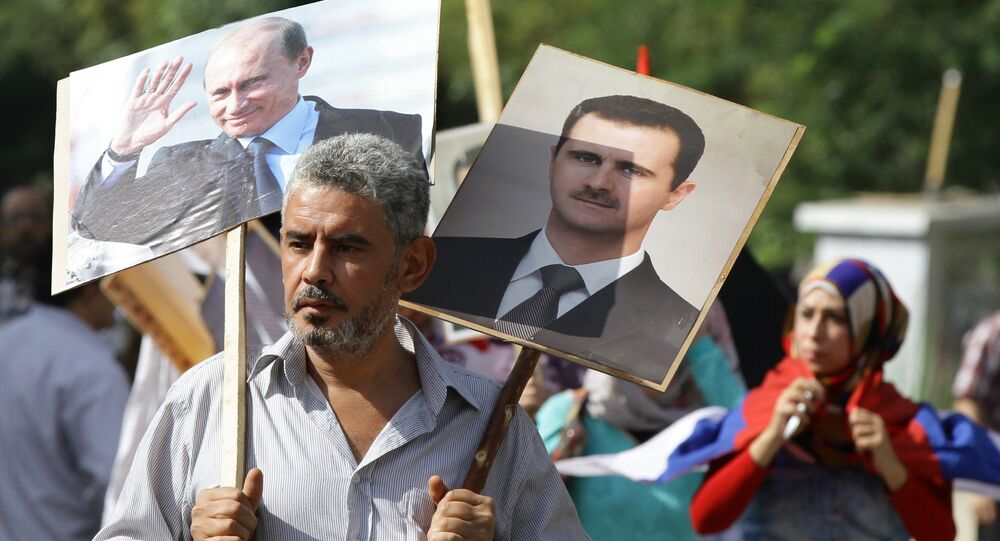 How Washington Squandered Numerous Opportunities for Peace in Syria

Although the American political establishment puts the blame for the Syrian crisis on Bashar al-Assad and on Russian President Vladimir Putin for inflaming the conflict, Washington's decision-makers should take a long hard look in the mirror, US researcher Jonathan Marshall notes.

The actual history of the Syrian crisis indicates that Washington, obsessed with a Syrian regime change, missed plenty of opportunities for peace, US independent researcher Jonathan Marshall claims.

The researcher points to the fact that a group of 55 House Democrats sent a letter to US President Barack Obama, urging him to break the vicious cycle of military escalation in Syria.

"[I]t is time to devote ourselves to a negotiated peace, and work with allies, including surrounding Arab states that have a vested interest in the security and stability of the region. Convening international negotiations to end the Syria conflict would be in the best interests of US and global security, and is also, more importantly, a moral imperative," the group wrote as quoted by Marshall.

© Sputnik / Aleksey Nikolskyi
A Leader of the Same Caliber as Putin Desperately Needed in US – US Analyst
In his article for Consortiumnews.com, Marshall looks at the first Geneva conference on Syria which was held in April 2012. Major UN members came to the conclusion that a transitional government should be formed in Syria including participants from all political camps. However, the negotiation ended in a stalemate after then US Secretary of State Hillary Clinton demanded that Syrian President Bashar al-Assad should not participate in the transition government.

The US researcher noted that former Finnish President Martti Ahtisaari and Norwegian General Robert Mood later blamed the US government and America's allies, Britain and France, for dismissing such a huge opportunity for peace.

"Contrary to the caricature presented in many Western media, the Russians did not then or later insist that Assad remain in power," Marshall stressed.

The researcher quoted Russian President Putin who said in late 2012, that Russia's "position is not for the retention of Assad and his regime in power at any cost but that the people in the beginning would come to an agreement on how they would live in the future, how their safety and participation in ruling the state would be provided for, and then start changing the current state of affairs in accordance with these agreements, and not vice versa."

In spring 2013 Russia and the US again agreed to bring the government and the opposition to the negotiation table.

© AFP 2021 / AMC / FADI AL-HALABI
Anti-Assad Conspiracy: Western Fingerprints All Over Syrian Civil War
"This time, significantly, Kerry did not demand that Assad step down as a precondition for talks. Then came the huge diversionary controversy over Syrian chemical weapons, with the White House claiming that the Assad regime had crossed the 'red line'," Marshall pointed out, adding that Russia's assistance in brokering Syria's agreement to destroy all of its chemical weapon stocks was crucial.

Interestingly enough, Marshall does not mention the fact that there is still a raging controversy surrounding who was exactly behind the notorious gas attacks.

A United Nations investigation into human rights abuses in Syria indicated in May 2013 that at least two of alleged attacks (in Aleppo in March 2013 and Homs in December 2012) were most likely conducted by Syrian rebels and not Assad's government forces.

Some experts even go so far as to suggest that the intelligence services of Saudi Arabia and Turkey could have been behind the crime, trying to throw a wrench in the Syrian peace talks.

"Soon, the Western-supported putsch against the Russian-backed government of the Ukraine caused a dramatic setback in US-Russian relations, putting all progress in Syria on hold," Marshall writes.

"Seeking to appease neoconservative critics who demanded even tougher interventions in both theaters, President Obama requested huge new sums of money to arm and train Syria's rebels — and to beef up the US military presence in Central and Eastern Europe," he continues.

By pushing ahead with the regime change project, Washington and its Western European and Arab allies "fostered the rise of the radical Islamist opposition," Marshall underscores, adding that this opposition has no interest in peace negotiations.

"If there is to be any hope of an outcome short of a bloodthirsty Islamist victory, it will require a total commitment by foreign powers to halt their supply of money and arms to opposition forces that, for now at least, reject participation in the peace process," the independent researcher concludes.