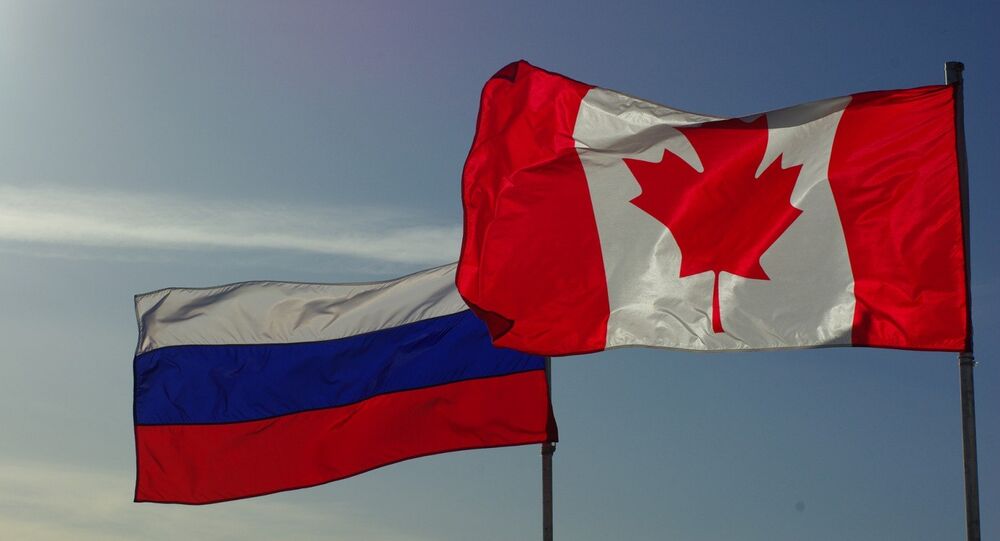 Canada must abandon its anti-Russian rhetoric and start an open dialogue with Russian leadership and its media, Toban Leckie, candidate in the federal elections from the Strength in Democracy party, told Sputnik.

MOSCOW (Sputnik), Anastasia Levchenko — Relations with Moscow are a point of contention between major parties standing for election on Monday. While the ruling Conservatives are known for their hard-line anti-Russia stance over the Ukrainian crisis, the New Democratic Party (NDP), the Liberal Party, Bloc Quebecois, the Greens and the Strength in Democracy claim relations with Russia need a reset.

"We need to provide an open conversation with the Russian leadership and the Russian media and recognize that with a shift in dialogue we can become closer allies on certain issues," Leckie said, criticizing the inefficiency of the government's anti-Russian position.

The candidate explained that issues involving Ukraine are very sensitive in Canada due to a traditionally numerous Ukrainian diaspora in the country.

© AFP 2021 / Don MACKINNON
Canada Needs 'Reset of Relations' With Russia - Green Party Candidate
Ukrainians amount to about four percent of the Canadian population, and are expected to vote in support of the Conservatives in the upcoming elections.

Canada is one of the countries, alongside the United States and the European Union, that imposed sanctions against Russia amid the crisis in Ukraine. Prime Minister Stephen Harper has also provided Kiev with financial and material aid.

The current election is tight three-way race between the Conservatives, NDP and Liberals for the 338 parliament seats. According to CBC’s Poll Tracker, the Liberal Party is running first, but can fail to secure the majority of seats (170) with some 37 percent of popular support. The ruling Conservatives party and the NDP have some 30 and 22 percent correspondingly.

Strength in Democracy is a federal party that was formed in 2014 by the parliamentarians from the Bloc Quebecois and the NDP, who disapproved the lines of the four major parties – the Conservatives, NDP, Liberals and Bloc Quebecois. In 2015, the party runs candidates outside of Quebec.

Muslim immigration and Canada’s ability to accept refugees from Syria and Iraq has been a hotly debated issue in the run-up to the federal elections taking place on Monday.

"Canada traditionally had a very compassionate and open-door policy around immigration and refugees, but lately we are seeing a shift. Harper's main focus has been security around taking in Syrian refugees, and that is playing into people's fears around Muslims. It is not an effective response," Leckie told Sputnik.

© Flickr / longzijun
Anti-Terrorism Act Shaping Public Opinion in Run-Up to Canada Elections
To strengthen security amid widespread fear of a terrorist threat, the Conservative government introduced the Anti-Terrorism Act 2015, also referred to as Bill C-51. The act facilitates state agencies’ ability to share information about individuals, and is often described as infringing on fundamental freedoms of the citizen.

Centrist Liberals want to amend the bill and strengthen oversight on intelligence agencies. The leftist New Democratic Party (NDP), the Greens, the Bloc Quebecois and Strength in Democracy oppose the bill.

Canadian assistance to Syrian and Iraqi refugees is prominent in party debates. While Conservatives pledged to resettle an additional 10,000 refugees over the next four years, the Liberals, the NDP and the Greens claim this number should be much higher.

"Canada should accept a lot more migrants. We certainly have the space and the resources for it," Leckie said.

The candidate suggested that, because of Canada's engagement in the campaign against Islamic State, Syrians are not friendly to Canadian policies, adding that it is too late to drop out of the anti-IS coalition, and a balanced approach is needed..

The Canadian government will most likely ratify the hotly-debated Trans-Pacific Partnership (TPP) trade deal under pressure from the multinational corporations that it largely depends upon, Toban Leckie said.

Earlier this month, 12 countries of the Pacific Rim, including Canada, reached an agreement on the wording and subject matter of the TPP deal, which aims to deregulate trade, and covers about 40 percent of the global economy. Ratification of the agreement is pending.

"Small agricultural producers, especially the dairy industry, are going to suffer a lot from this agreement. Unfortunately, government is under a lot of pressure from big corporations. So, even if it is against the best interests of Canadians, I wouldn't be surprised if any of the three major parties [the Conservatives, the Liberals and the New Democratic Party] ratifies the TPP," Leckie said.

There has been considerable opposition to TPP from international organizations and lawmakers, who have criticized the deal’s unusually secretive negotiations, an apparent favoritism toward multinational corporations and the exclusion of BRICS countries.

A coalition government is almost guaranteed as a result of federal elections in Canada on Monday, a candidate from the Strength in Democracy party, told Sputnik.

In a tight three-way race between the ruling Conservative Party, the leftist New Democratic Party (NDP), and centrist Liberals, no party seems to have enough popular support to secure the majority of seats in the parliament.

According to CBC’s Poll Tracker, the Liberal Party is the frontrunner with some 37 percent of votes, which gives it 146 seats.

"No matter what, it will be a minority government situation. The coalition will be formed between the NDP and Liberals. The Conservatives are too far-right to ever form a coalition with either of the three parties. So, Liberal-NDP is the only option," Leckie said.

The candidate added that a coalition government usually tends to be more moderate and democratic.

"When you have a minority government or a coalition government, things get done more slowly, but they end up being fairer. Because when the Conservatives had a majority, they could come up with really radical policies. It happened quickly, but could be very dangerous. With a coalition government or a minority government you have to make deals with other parties. Policies are more moderate policies, and changes are more subtle. I think it's best for a democracy," Leckie said.

© Photo : Elections Canada
Canada to Hold Federal Elections Monday
At the moment, CBC’s Poll Tracker predicts that the Conservatives may get some 30 percent of votes, and the NDP – around 22. Bloc Quebecois and the Greens follow the frontrunners.

Strength in Democracy is a federal party that was formed in 2014 by parliamentarians from the Bloc Quebecois and the NDP, who disapproved the four major parties – the Conservatives, NDP, Liberals and Bloc Quebecois. In 2015, the party runs candidates outside of Quebec.