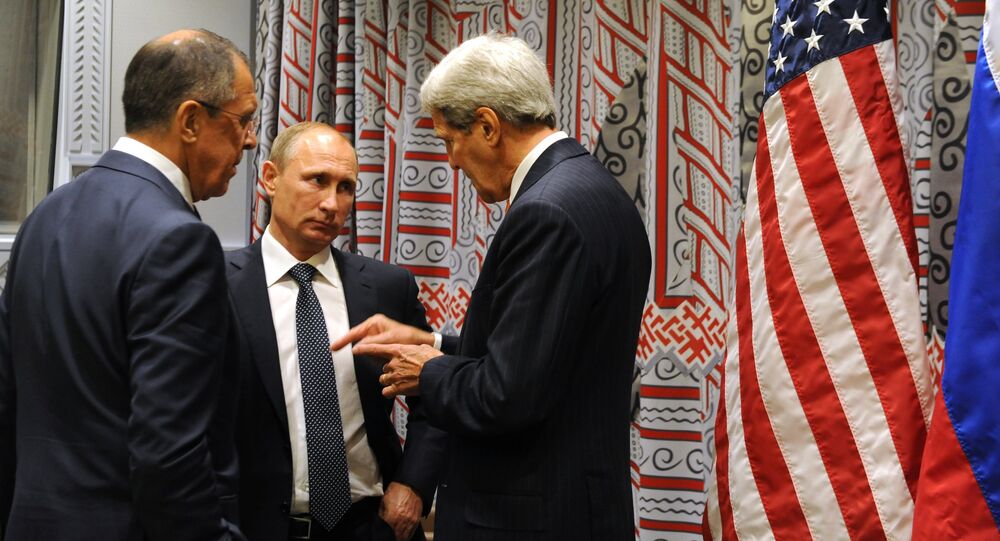 Commenting on President Putin's "muscular military intervention" in Syria, a recent article in The Christian Science Monitor suggested that Moscow now threatens to steal away traditional US Middle Eastern allies by showing its intervention to be "decisive and practical," contrasting with America's uncertainty and lack of commitment.

The newspaper noted that "by swooping in to rescue a tottering regime – one ruled by a leader that President Obama has insisted 'must go' for more than four years – Mr. Putin is declaring loud and clear that the American style of regime change is not to be trusted. By comparison, Russia seeks to cast itself as the stronger and more reliable of the major powers in the Middle East."

Speaking to CSM, Naval War College international relations scholar Nikolas Gvosdev suggested that "to America's partners in the region, starting with Egypt, who are questioning the depth of the US commitment, [Putin] is making a stark comparison: Russian reliability vs. American indecision…Putin is saying that Washington is no longer the only go-to capital for getting things done in the world."

© CC BY-SA 2.0 / Tom Finzel / Cherry Washington Monument
Jealous Quarrel: US Irate Over Iraqi Moves to Create Moscow-Baghdad Alliance to Fight ISIL
Pointing out that both Putin and Russian Foreign Minister Sergei Lavrov have repeatedly said "that regime change imposed by outside forces leads to nothing but disorder and greater violence," CSM noted that Russia, instead, presents itself as a country "intervening in Syria to reestablish order and security."

John Hulsman, American-born foreign policy expert and president of the Rothenburg, Germany-based John C. Hulsman Enterprises consulting firm, told the newspaper that the Russian leader "spends his time building up himself and his country by pointing out the flaws of the United States."

"Instead of seeing Putin as a Bond villain the way the US press seems to, we should see him for what he is, a nationalist whose focus is reestablishing and extending Russia's national honor," the expert added.

In this way, according to Hulsman, Putin is really a "Gaullist." The analyst pointed to similarities between the Russian president and post-Second World War French President Charles de Gaulle, including their criticisms "of America's global foibles and arrogance."

Suggesting that Russia's intervention is demonstrating Russia's attempt to punch above its weight, Hulsman noted that "by intervening, [Putin] is saying that Russia must be reckoned with. By espousing this idea, appealing to a growing number of listeners, that the region would be better off if unsavory but authoritative leaders were left in place, he is winning for himself a ticket to the big show."

© Sputnik / Dmitriy Vinogradov
Comfort No More? West Alarmed Not by Russia’s Weaponry But Inner Spirit
Commenting on Putin's goals in Syria, Gvosdev suggested that "even if Putin only does a partial save and manages to keep Assad on his feet…that's probably enough. He can still say 'I can get something for my guys, and I never claimed to do more.'" Washington, in contrast, has "painted itself into a corner," the analyst noting Washington's stubbornness has led to a situation where "anything short of 'Assad must go' will be a defeat."

In fact, according to the Naval War College analyst, the Russian leader's limited aims are what has kept him out of trouble, compared with his US counterpart. "Putin has no thought of restoring and transforming Syria – instead a frozen conflict where Assad survives and some manner of order is reestablished at least in part of the country will probably be enough. Those larger goals are the ones he sees the US repeatedly going for and then failing at."

While Gvosdev's suggestion that Russia does not intend to see the war in Syria through to a peaceful conclusion is definitely something which can be argued with, his apparent suggestion that Russia will be able to avoid getting bogged down, US style, by establishing limits and resisting full-scale invasions and nation-building, is spot on.

Realizing Gravity of ISIL Threat, US Acquiesces to Russian Mission in Syria