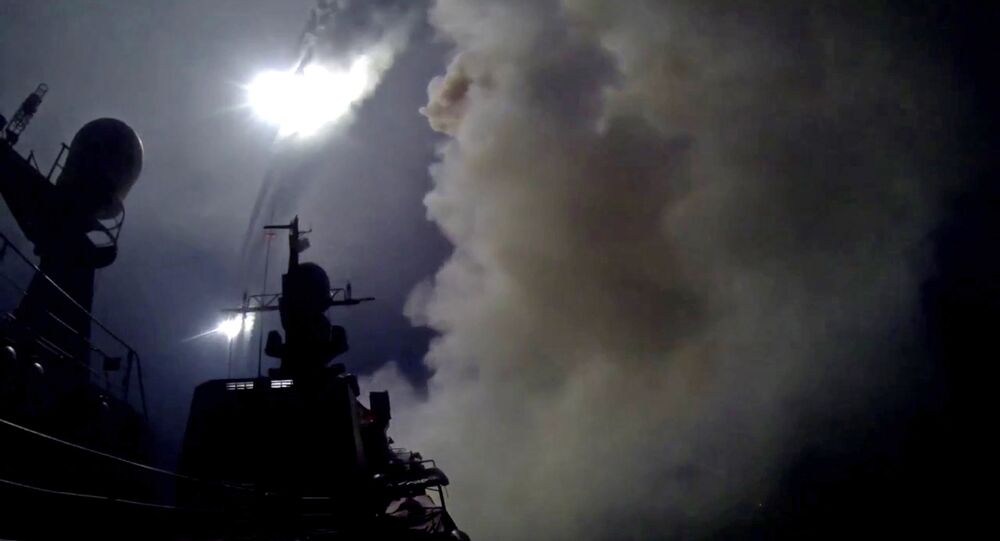 © RIA Novosti . Grigory Sysoyev
Is the Caspian Sea Fleet a Game-Changer?
In an article for Mexican daily newspaper Le Jornada, Jalife-Rahme cited Moscow-based political analyst Rostislav Ishchenko, who recently wrote that the launch of Kalibr-class missiles by the Caspian Flotilla last week caught Washington completely off-guard, and that with this move, Russia "thus put an end to the US's global naval supremacy."

"Perhaps someone might consider my assertion to be rash," Jalife-Rahme commented, "but it is probably no coincidence that two days after the launch of the Russian cruise missiles, the US aircraft carrier USS Theodore Roosevelt suddenly left the Persian Gulf, where it had been deployed since April of this year."

And with this, the analyst noted, "now, for the first time since 2007, not a single US aircraft carrier is left on duty in the Middle East."

Russian Defense Ministry
Kalibr-NK: The Russian Cruise Missile That Shocked the World
Jalife-Rahme recalled that "the USS Theodore Roosevelt, with its five thousand sailors and 65 combat aircraft, had arrived in the region in late April, serving as a springboard for US aviation's (rather ineffective) attacks against Islamic State positions in Iraq, Syria and [against militants] in Afghanistan."

"The Pentagon says that air strikes are now being carried out from bases in Turkey, home to about half-a-dozen USAF F-16s, but this is clearly not enough to close the gap formed by the departure of the aircraft carrier," the analyst continued.

Late last week, commenting on the Caspian Flotilla's attacks against ISIL positions in Syria, Ishchenko had suggested in an analysis for RIA Novosti that prior to the strikes, "not only the Caspian Flotilla, but also the Black Sea and Baltic Fleets, were considered by the US as potential enemy forces capable of only of defending their assigned coastal territories, catching smugglers and poachers, and conducting amphibious operations in their enclosed waters." Now, the analyst argued, US planners will be forced to revise their assessments.

Jalife-Rahme noted that "perhaps Ishchenko is being braggadocious when he says that the launch of 26 Kalibr-class cruise missiles has deprived the US of global maritime superiority for many years to come. However, their use in combat did demonstrate to the world that to destroy their adversary, the Russian Navy no longer needs to be close to the Eastern Mediterranean, in the Persian Gulf, in the English Channel, off the coast of Norway, in the North Atlantic or in the Pacific Ocean north of Hawaii."

© Photo : Pacific fleet's press service
Russia’s Tiny Missile Boats Pack Huge Punch – Military Expert
Commenting on the implications of the Russian demonstration of force, the journalist suggested that "we will have to wait for the opinion of the heirs of US navy admiral and geostrategist Alfred Thayer Mahan," who once asserted, at the beginning of the last century, that no one in the world could ever challenge the advance of US naval power.

The journalist recalled that US military planners had earlier assumed that in order to destroy one carrier strike group of the US Navy, the Russian fleet would have to fire a volley of not less than one hundred missiles, which would require the concentration of almost all the ships (missile cruisers, missile destroyers, and multipurpose nuclear attack submarines) of either the Northern or Pacific Fleets.

Furthermore, strategists had earlier believed that each of the two Russian fleets not trapped in an enclosed sea could, in the worst case scenario, cause some (perhaps even significant) damage to only one carrier group, after which they would virtually cease to exist, with the supremacy of the remaining US forces along the world's oceans assured.

These assumptions, in the journalist's view, were fundamentally challenged by last week's missile launches in the Caspian, with even the smaller of the Russian Navy's ships proving capable of launching deadly volleys from distances of several thousand kilometers.

NewsTeam
Cruise Missile Strike on ISIL: Success for Russia, Troubles for NATO
Citing Beijing's reaction to the missile strikes, Jalife-Rahmne noted that the launch of the Kalibrs could be "interpreted as a warning to the United States. Thus, the Kremlin is sending a signal to the White House that it is time to sit down at the negotiating table to begin a discussion aimed at defusing tensions over events in both Syria and Ukraine." It is a suggestion with which the journalist, for his part, agreed.