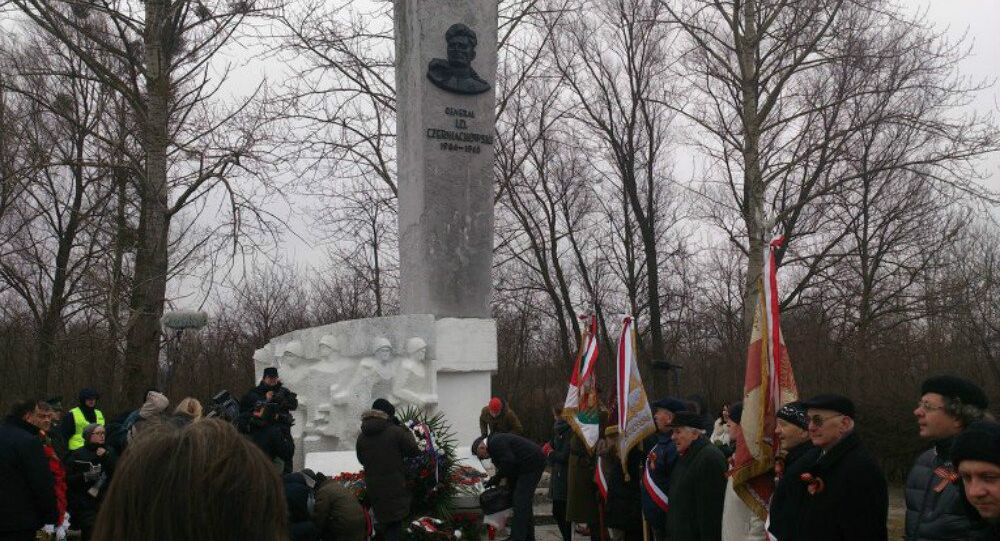 Blasting Russian Ambassador Sergei Andreyev for his reference to Warsaw's unwillingness to join the anti-Hitler coalition pushed for by the USSR on the eve of WWII, Polish authorities remain suspiciously silent on the glorification of OUN-UPA Nazi collaborators by the present Ukrainian government, Polish author Bohdan Pietka explains.

Deploring the recent desecration of the Red Army cemetery by Polish hooligans the Russian Ambassador pointed to the fact that Poland had long opposed the creation of an anti-Hitler coalition proposed by the USSR on the eve of the Second World War. He also noted that Soviet troops "entered" Poland on September 17, 1939 in contrast to the Polish version which says that the USSR "invaded" the country.

Andreyev's remarks prompted fierce criticism from Polish Foreign Minister Grzegorz Schetyna, who claimed that "these [were] deplorable statements, arising from a failure to understand history."

However, while criticizing Russia's Ambassador, the Polish government has, so far at least, ignored Ukraine's glorification of the Banderites, the infamous Organization of Ukrainian Nationalists (OUN) responsible for the mass killings of Polish, Jewish and Ukrainian civilians during the Second World War, Polish author Bohdan Pietka notes.

© Photo : http://ombudskid.livejournal.com/
Memory Loss: Poland Proposes to Remove 'Alien' Soviet Memorials to War Dead
Warsaw has double standards when it comes to Russia and Ukraine, Pietka noted in his article for Mysl Polska, adding that the Russian Ambassador's remarks came on the heels of Poland's decision to dismantle a monument to Soviet General Ivan Chernyakhovsky, who died liberating Poland from Nazis in February 1945.

Poland is apparently in the throes of politicizing its history, even going so far as to re-write some of its more 'inconvenient' truths.

So, how accurate were Ambassador Andreyev's comments?

"In January 1934 Poland signed a non-aggression pact with Nazi Germany, almost at the same time that the USSR began its long efforts to organize an anti-Nazi defensive alliance. It was a blow against Soviet collective security even as Maksim M. Litvinov, the Commissar for Foreign Affairs, sought to strengthen relations with Poland. Litvinov warned Polish Foreign Minister, Jozef Beck, of the danger of courting Nazi Germany, but Beck would not listen," Canadian Professor Michael Jabara Carley of the University of Montreal writes in his article for Strategic Culture Foundation.

"In 1934-1935 as [Soviet Commissar for Foreign Affairs Maxim] Litvinov sought to consolidate European collective security, Poland resisted every step of the way," the Canadian professor of history underscored.

© AP Photo /
The Munich Betrayal: How Western Powers 'Sold' Czechoslovakia to Hitler
Then, in 1938, the Czechoslovak crisis erupted. Betrayed by its Western European allies Czechoslovakia was handed to Adolf Hitler.

Incredible as it may seem now, Poland at the time declared that it would "oppose by force" any attempt by the Soviet Union to cross Polish territory on land or in the air in order to protect Czechoslovakia from Nazi Germany, the professor pointed out.

"The French ambassador in Berlin told his Soviet counterpart that the Polish government was "clearly helping Germany" to destabilize Czechoslovakia. The issue of Teschen, a Czechoslovak district with a large Polish population, was the bee in Warsaw's bonnet. If Hitler gets the German populated Sudeten territories, said Polish diplomats, we won't be satisfied with empty hands. We want Teschen [Polish authorities said]," the Canadian academic remarked, adding that Poland was not alone in sabotaging the USSR's efforts to build a broad European coalition against Hitler's aggression.

As history recalls, in September 1939 Poland itself fell victim to Nazi Germany.

"Russian Ambassador Andreyev said Poland bore some responsibility for the 'catastrophe, which occurred in September 1939.' Given the archival record, one would have to say that the Russian Ambassador was being polite and understated the case," Professor Carley stressed.

© AP Photo /
Untold Story of Molotov-Ribbentrop Pact: Why USSR Inked Non-Aggression Treaty With Hitler
But did the USSR "invade" Poland on September 17, 1939?

By September 17, the Polish government had fled the country, without proclaiming a government in exile recognized internationally. The country had no government and Poland as a state had ceased to exist under international law.

American Professor Grover C. Furr of Montclair State University pointed to the fact that the League of Nations did not determine the USSR had invaded its member state.

In contrast, when the Soviet-Finnish war started in 1939 the League of Nations did vote to expel the USSR, the American professor noted in his book "Blood Lies: The Evidence that Every Accusation Against Joseph Stalin and the Soviet Union in Timothy Snyder's Bloodlands Is False."

Furthermore, Romania and France, which had military treaties with Poland, did not declare war against the USSR. England never demanded that the USSR should withdraw its troops from Western Belorussia and Western Ukraine. "On the contrary, the British government concluded that these territories should not be a part of a future Polish state. Even the Polish government-in-exile agreed!" Furr stressed, citing archival documents.

Moreover, in the 1950s, during the Cold War, the University of California, Los Angeles, examined the case and concluded with reference to international law, that the Soviet Union was not an "aggressor," but indeed it was "neutral" and its "neutrality" was recognized internationally.

"Polish Minister Schetyna may attempt to "rewrite" history all he likes, but I can advise him that he is wasting his time. The evidence trail in the archives is too deep to hide. It is not a pretty picture, Poland in the 1930s. More introspection and less Russophobia would serve the Polish government well in these dangerous times," Professor Carley noted, calling out Schetyna for falsifying history when the Minister claimed that Ukrainians, not the Red Army, liberated Auschwitz, the Nazi death camp.

And still the question asked by Bohdan Pietka remains unanswered: why has the Polish government demanded no explanation as to why the Ukrainian government is commemorating OUN-UPA insurgents as heroes and erecting monuments for those who unleashed a terrible massacre of Poles in Volhynia and Eastern Galicia.