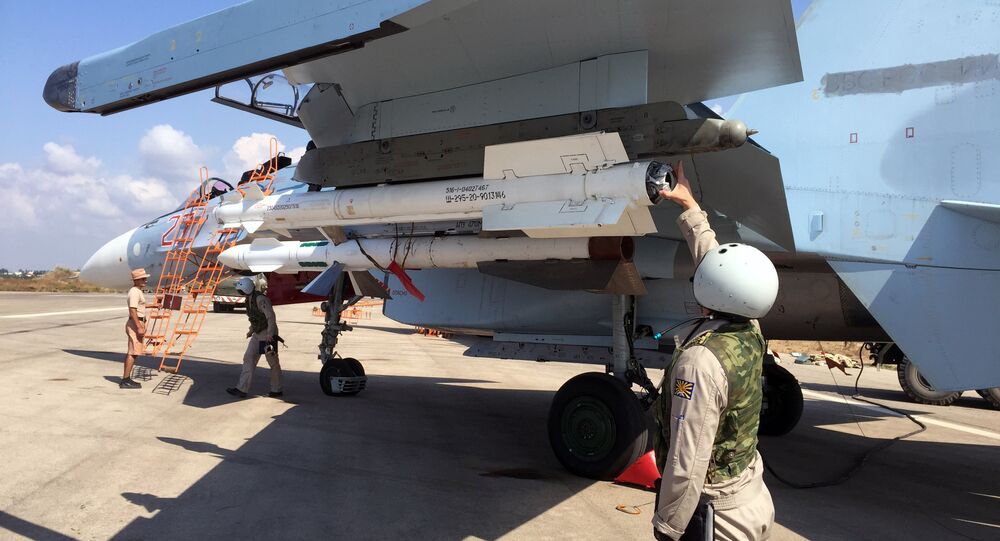 ISIL's army of jihadist militants that Russia is fighting now in Syria, is the latest 'Frankenstein' of the West and their Gulf State allies, French political analyst Gilbert Mercier told Sputnik, adding that once ISIL is defeated, these "leading culprits of the destruction" should contribute the most to rebuilding Syria.

Since Russia launched its military operation in Syria in response to an official request made by the country's legitimate, democratically-elected government, the West and its Middle Eastern allies have been on pins and needles. Efforts to recruit and fund a 'moderate' rebel militant force to take out the country's government have cost the US millions but ultimately proved fruitless.

It is no secret that the West and the Gulf States have contributed a lot to the ongoing turmoil.

"Since the invasion of Iraq in 2003, the footprint of the West in the Middle East has been enormous and overall a complete disaster. Some policymakers in Washington, Paris, London and Berlin are fully aware of this even though they would never acknowledge it in a public statement. The ISIL jihadist mercenary army that Russia and Iran have to fight now in Syria and Iraq was largely created, with the full knowledge and support of the West, by their regional allies Saudi Arabia and Qatar. The Saudi man in charge of Syria's dossier was the now disgraced Prince Bandar (also known as Bandar-Bush)," French journalist, political analyst and Editor-In-Chief of News Junkie Post Gilbert Mercier told Sputnik.

© AFP 2021 / BULENT KILIC
By Bombing Terrorists in Syria Russia Hits Washington's Raw Nerve
The political analyst underscored that the so-called Arab Spring of 2011 was hijacked by Sunni autocrats and Washington neo-cons to turn the energy of a movement into a regime-change policy.

"What they did, in reality, was to finance and arm a 70,000-strong jihadist foreign legion with territorial ambitions. They have weapons to fight and plenty of resources through the oil fields under their control. ISIL is the latest Frankenstein of the West and their Gulf State allies. The battle-hardened jihadist soldiers of fortune are their own masters and have an agenda of territorial expansion to recreate a Caliphate," Mercier stressed.

Washington has long harbored plans to oust the government of Syria, Russia's longstanding ally in the Middle East.

"Saudis and Qataris sold Washington the notion that the toppling of Gaddafi in Libya could be easily applied to topple Bashar al-Assad in Syria," the French journalist elaborated.

But Russia has obviously upset this apple-cart.

According to the political analyst, once this goal is achieved, it is likely that a ground operation will start. Assad's forces would come from the Allawite-controlled north while Lebanese militias would strike ISIL in the West. Simultaneously, in a coordinated fashion, Iraqi Shiite militias under Iranian command and even Iraqi troops would come from the south to take back ISIL-controlled areas of Iraq.

"The jihadist army will have nowhere to go, and they are likely to be formidable opponents using their tanks and armor vehicles — all proudly made in the USA — and will have snipers in position blending into the ruins of Syria. Regardless, if the coalition of Russia and Iran commit enough troops on the ground, they should unquestionably prevail," Mercier emphasized.

© Sputnik / Igor Zarembo
Syrian Strikes: A Win for Russia Will be a Win for Syria and Middle East
But what will Washington undertake in order to boost its shrinking influence in the Middle East? Will the West just watch how Russia and Iran are gaining ground in the region?

"It is likely that the Americans, their European and regional Sunni allies will stay on the sideline while Russia and Iraqi Shiite militias under the command of Iran's Revolutionary Guard fight ISIL. The West will be quite happy to stay out of the way," Mercier suggested.

"The narrative in Washington is full of contradictions. While Mr. Obama is more or less stuck in his 2013 talking point of 'Assad must go,' Joe Biden on October 2nd admitted that since 2011, it has always been a challenge to find "some moderate Syrian able to fight Assad." As matter of fact, 'moderates' from the so-called Free Syrian Army have always been harder to find than a needle in a giant hay stack," the political analyst told Sputnik.

At the same time, the political analyst referred to one of the latest New York Times articles written by Eric Schmitt and Michael R. Gordon.  According to the US journalists, "the American-led coalition fighting the Islamic State has begun preparing to open a major front in northeastern Syria, aiming to put pressure on Raqqa, the terrorist group's de facto capital."

© AFP 2021 / BARAA AL-HALABI
'Hands off Al-Qaeda!' US Hawks Find Themselves Protecting Terrorists
Reportedly, US President Obama ordered the Pentagon to directly provide ammunition and weapons to Syrian opposition forces on the ground. It is expected that the US-led coalition will empower 3,000 to 5,000 Arab fighters in order to launch an offensive on the terrorist "capital" along with 20,000 Kurdish combatants backed by coalition's warplanes. The plan also envisages sealing a 60-mile part of the Syrian-Turkish border.

Mercier believes that this could complicate the Russian-Iranian military operations in Syria.

Meanwhile, some experts suggest that Washington's party of war may contribute to the escalation of the conflict in Ukraine while Moscow is busy with untying the Middle Eastern Gordian knot.

"No. This will not happen," Mercier stressed.

"It has to do with the US election cycle. Mr. Obama is a lame duck president, and he is certainly acting like one. On the Democrat side, Hillary Clinton is the one "talking tough" against Russia's direct involvement in Syria. She stated a couple of days ago that "a no-fly zone should be implemented in Syria." As far as Washington making more stupid decisions in the Ukrainian dossier, it is very unlikely to happen. The man running US foreign policy at the moment is Secretary of State John Kerry, and his geopolitical acumen is fairly high for a US policymaker," the political analyst explained.

"No. There is no analogy to establish between the USSR war in Afghanistan in the 1980s and the current military commitment of Russia in Syria. The decade-long Red Army war in Afghanistan was firstly poorly conceived and secondly badly executed. Moscow did not understand that they were taking on very tough nationalist fighters," he stressed.

So, what are the possible outcomes of Russia's involvement in Syria for Syria, Iran, Iraq and Washington?

"Syria is destroyed, it is literally tabula rasa. The best outcome, which might be the only option, will be to structure Syria as a federation with a map that follows sectarian divisions, which have become extreme," Mercier underscored.

"Once ISIL is defeated by Russia and Iran, Syria will need something like the Marshall plan that was conceived to rebuild West Germany after World War II. The leading culprits of the destruction such as Saudi Arabia, Qatar, the US, the UK, France, Germany and Turkey should contribute the most. Perhaps then, millions of Syrian refugees can come back from Turkey, Jordan and elsewhere and start a slow process of rebuilding and relearning to cohabit despite the bloodshed, trauma, and misery that they have experienced," the journalist elaborated.

On the other hand, in Iraq, the same process of reconciliation must take place between Shiites and Sunnis, according to Mercier.

"Once the Russian-led coalition prevails against the jihadists, Iran will probably gain a lot of regional geopolitical clout in direct proportion to the likely diminished influence of Saudi Arabia — currently meddling in Yemen's affairs — and Qatar. Perhaps the regain of influence of Russia in the Middle East will be a source of stability for the region. After all, Syria has been an ally of Russia in the region since 1946, and during that time it was not a source of major regional conflict in the Middle East," Gilbert Mercier concluded.