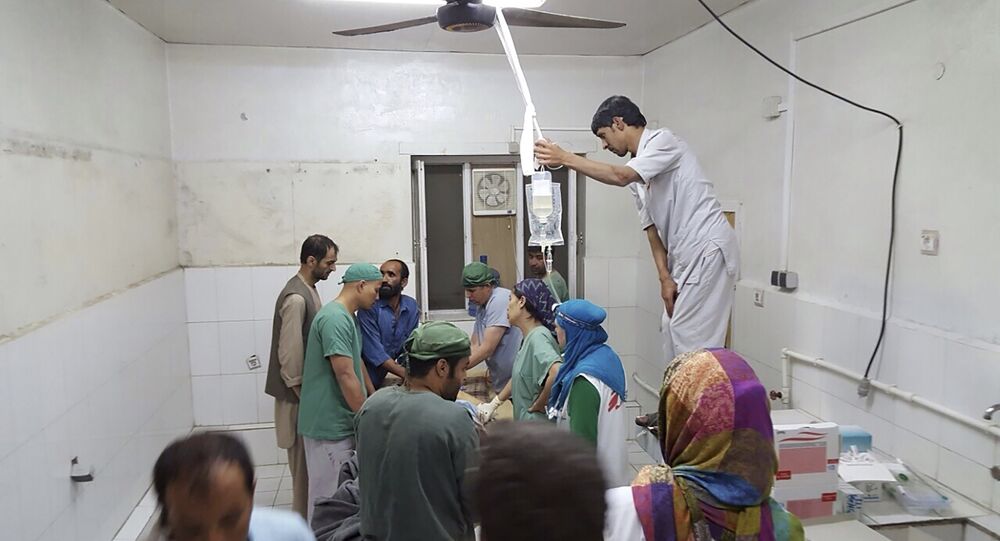 There were no foreigners among those killed by the airstrike because the foreign specialists left the hospital prior to the attack, a doctor working in the Medecins Sans Frontieres hospital in Kunduz said.

© AP Photo / Médecins Sans Frontières via AP
Kunduz Hospital Bombing a 'Grave Violation of International Law' – Russian Foreign Ministry
A doctor working in the Medecins Sans Frontieres hospital in Kunduz that was recently bombed by US forces told Sputnik on condition of anonymity that the foreign medical personnel had left the medical facility prior to the airstrike without offering any kind of explanation.

"None of the doctors at the hospital survived the airstrike, they were all burned alive," said the medic who was on his day off during the attack.

Doctors Without Borders slams US for trying to shift blame for Kunduz attack to Afghans. "The reality is the U.S. dropped those bombs."

"They were my colleagues, citizens of Afghanistan. Their bodies are currently being identified, which is not an easy task because the corpses are severely burned and some of the victims' relatives have already fled Kunduz due to the Taliban attacks. But I know for certain that there were no foreigners among those killed by the airstrike because the foreign specialists left the hospital prior to the attack without any explanation."

Doctors without borders staff at Kunduz hospital days before it was hit by US-airstrike. Many of them killed @MSF pic.twitter.com/qhTAQCCsOM

He added that the hospital was indeed captured by the Taliban forces which seized Kunduz last week, but was swiftly liberated and resumed operations. The doctor also pointed out that despite some media reports, the Taliban fighters did not take any members of the hospital staff prisoner. In fact, Taliban forces had seized another medical facility — the Kunduz regional hospital — where they captured several patients who worked for the Afghan government.

© REUTERS / Medecins Sans Frontieres/Handout via Reuters
US Bombing of Hospital is a War Crime – Afghan Legal Association Head
"Due to all the fighting, the hospital was treating those wounded in action during the last few days, and most of the injured were members of the Taliban," the doctor said.

"We treated them because our organization works 'without borders' and political preferences. We treat all who ask us for help."

UPDATE: This contradicts the official MSF statement obtained by Sputnik. According to the MSF, "nine international MSF staff members and 1 international ICRC staff member were present in MSF's trauma hospital in Kunduz when the air strike was carried out in the early hours of Saturday morning on October 3. Later that day, following the attack, the international staff members were evacuated from Kunduz."