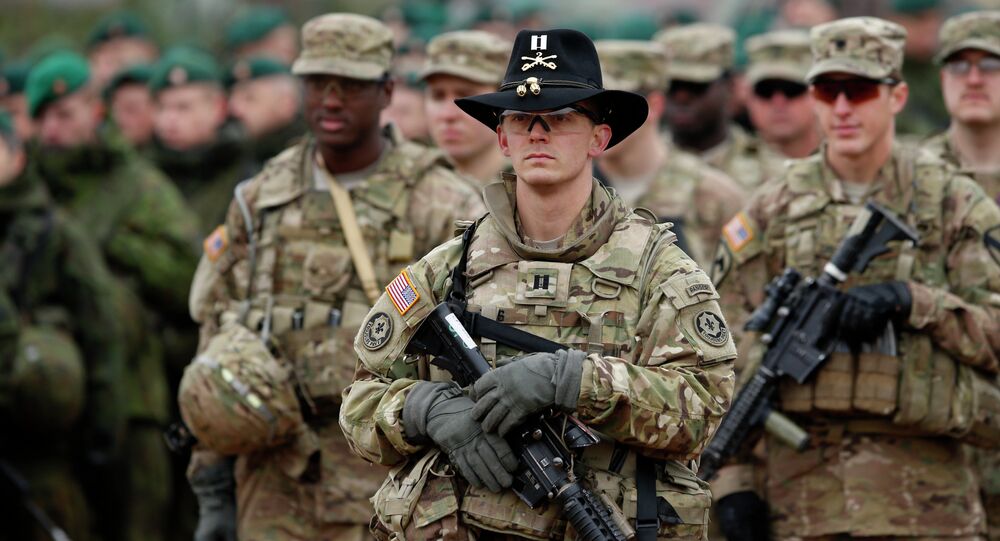 According to State and Defense Department sources speaking to Foreign Policy, the Pentagon is "dusting off," reevaluating and updating its contingency plans for war with Russia. The publication explains why all of this is Russia's fault, and where things may go from here.

The article, written by well-known Russian politics critic and self-confessed Russophobe Julia Ioffe, explains this is "the first time since the collapse of the Soviet Union" that the Pentagon has decided to review and update its contingency plans for war with Russia, based on revised appraisals of the country as a potential threat, rather than a potential partner, to NATO.

The reason for the Pentagon's rush to update its war plans is, ostensibly, Russia's 'annexation' of Crimea, referring to the referendum held in the territory in the aftermath of the Maidan coup d'état in Kiev in early 2014, which saw the peninsula breaking off from Ukraine and joining Russia. It also includes Russia's 'invasion' of eastern Ukraine, referring to the repeated allegations made by officials in Kiev that between nine and 200,000 regular Russian troops are engaged militarily in the eastern breakaway regions of Donetsk and Lugansk.

© Flickr / MattysFlicks
The 'Enemy' Within: US, NATO Want to Silence All Reporters They Dislike
An unnamed senior defense official familiar with the updated plans told FP that "given the security environment, given the actions of Russia, it has become apparent that we need to make sure to update the plans that we have in response to any potential aggression against any NATO allies."

The official did not comment and presumably was not asked about whether the US's policy of supporting regime change in Kiev against an unpopular but democratically elected president in February 2014 may have had anything to do with Russia's response to the Ukraine crisis, and thus with the deterioration of relations between Washington and Moscow.

FP emphasized that the new plans are a response to a drastic departure from NATO-Russia relations which emerged following the collapse of the Soviet Union, where for many years Moscow acceded to the alliance's march eastward, signing defense and cooperation agreements, holding "joint military exercises, regular consultations, and even [opening] a NATO transit point in Ulyanovsk, Russia, for materiel heading to the fight in Afghanistan." Prior to the crisis in Ukraine, Russia was "neither a danger nor a priority."

The official explained that the new plans, each having to do with hypothetical Russian aggression against the Baltic states (naturally), have two tracks, one focusing on US action against Russia in coordination with NATO, and the other considering the US acting independently of the alliance.

© AP Photo / Mindaugas Kulbis
US to Deploy Battle Tanks, Infantry Fighting Vehicles to Poland in 2016
As Ioffe explains, "both versions of the updated contingency plans focus on Russian incursions into the Baltics, a scenario seen as the most likely front for new Russian aggression." Moreover, "they are increasingly focusing not on traditional warfare, but on the hybrid tactics Russia used in Crimea and eastern Ukraine: 'little green men', manufactured protests, and cyber warfare." Taken together, this is said to comprise "a significant departure from post-Cold War US defense policy."

If FP's estimation of the new thinking going into the Pentagon's war plans against Russia is correct, it remains uncertain just how the Russian military's 'little green men' would find their way into the Baltic states, given that unlike Crimea, where the Russian military had a long-term base agreement to host Russia's Black Sea Fleet, Moscow does not have any military bases in any of the Baltic countries.

As far as Russia using the sneaky hybrid warfare methods of 'manufactured protests' and sending unidentified little green men to capture key positions in regional government, as has been alleged in eastern Ukraine, it seems that the Pentagon's planners simply cannot fathom the idea that people in some regions of an ethnically and socially divided country (like Ukraine) could have launched organic protests and organized self-defense forces following declarations from post-coup authorities in the capital that banning the Russian language and crushing counterrevolutionary resistance would be among their first priorities.

Foreign Policy explains with worry that since last year, repeated wargame scenario testing by the Rand Corporation for the US government of a hypothetical Russian 'hybrid invasion' of Estonia and Latvia has found that NATO would not be able to defend those countries at present force levels.

Citing commentary by Former Deputy Assistant Secretary of Defense for Force Development David Ochmanek, who now works at Rand and is involved in the simulations, FP noted that "given the recent reductions in the defense budgets of NATO member countries and American pullback from the region," NATO would be "outnumbered 2-to-1 in terms of manpower, even if all the US and NATO troops stationed in Europe were dispatched to the Baltics –including the 82nd Airborne, which is supposed to be ready to go on 24 hours' notice and is based at Fort Bragg, North Carolina."

© Flickr / Michael Baird
The Myth of a Russian 'Threat'
Citing hours of games involving the various scenarios which consistently resulted in a Russian victory, Ochmanek explained that "we just don't have those forces in Europe. The conclusion was that we are unable to defend the Baltics."

FP notes that even "working on the assumption that the United States and NATO had already started making positive changes to their force posture in Europe," presumably via a massive increase in the NATO men and heavy equipment present along Russia's western borders, "the conclusion was slightly more upbeat, but not by much." Ochmanek noted that NATO "can defend the capitals, we can present Russia with problems, and we can take away the prospect of a coup de main. But the dynamic remains the same." The problem, in the defense analyst's view, is the 'logistics of distance', as well as the time necessary to mobilize the US military contingent meant to defend the Baltics.

What Russia would possibly have to gain from attacking a NATO member, which raises the prospect of immediate nuclear and conventional retaliation from a numerically and military superior adversary, without the prospect of gains of any strategic importance, remains unclear, but it seems that the Pentagon's take on the matter is that until NATO has conventional superiority over Russia on Russia's own frontiers, the threat of the Russian bear will remain intolerably disturbing.

© Flickr / Chris
Ghost of Cold War: Pentagon Boss Brands Russia 'Very Significant Threat'
The good news for hawkish-minded analysts in Washington appears to be that the Defense Department has factored the results of the wargaming thought experiments into their planning, the unnamed senior official telling FP that the results will be used "to better understand a situation that few of us have thought about in detail for a number of years," adding that even as things are at present, "I have no doubt that NATO will prevail and that we will restore the territorial integrity of any NATO member."

US to Deploy Battle Tanks, Infantry Fighting Vehicles to Poland in 2016

Splurging on Defense 'Will Not Ensure' US Victory Over Russia