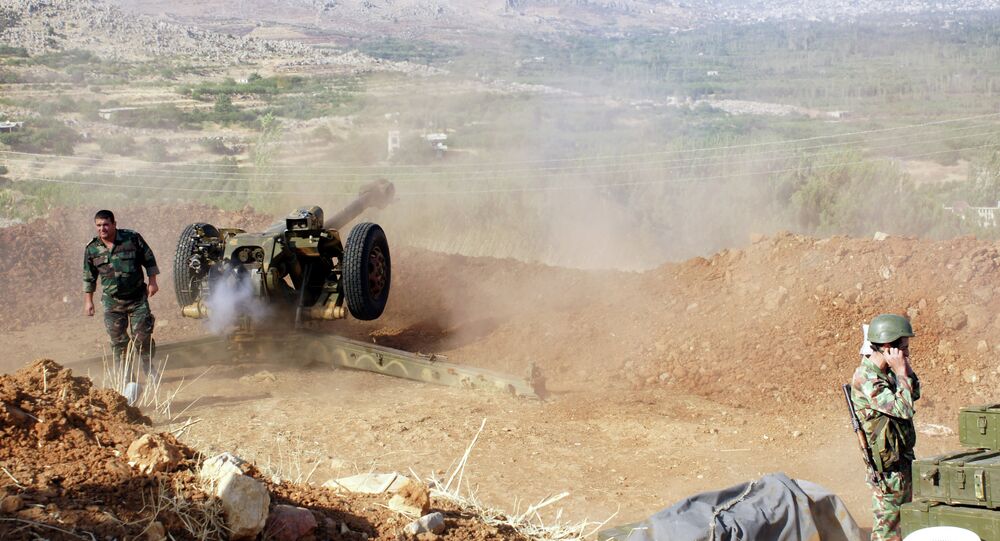 By portraying Russia as a the villain that supports Bashar al-Assad's "dictatorship" in Syria, Washington wants to transform the discourse on Syria and pin the blame on Moscow for the crisis in the region, US geopolitical analyst Eric Draitser notes.

The myth of Russia's "intervention" in Syria, which is now circulating in the Western media, has been fabricated by Washington, US geopolitical analyst and Stopimperialism.com editor Eric Draitser points out. He goes on to ask: why is the Western press hyping this narrative?

"From Washington to the Western media, everyone has been talking about reports of potential Russian 'intervention' in Syria… [T]he proliferation of this meme is a case study in the Western propaganda system, as one report is then repeated ad nauseam from thousands of sources, then built upon by subsequent reports, thereby manufacturing the irrefutable truth from the perspective of media pundits and Western mouthpieces," Draitser emphasized in his article for New Eastern Outlook.

© Sputnik / Andrey Stenin
America's New Nightmare: How to Cope With Russia on the Ground in Syria
Eric Draitser used several examples to illustrate his point, including Israeli and American publications which drew a gloomy picture of Moscow's "military buildup" in Syria. Citing unnamed "diplomatic sources", the media even went so far as to claim that Russia's boots on the ground had been spotted in the region, as well as large shipments of Russian weaponry and "Russian jets in Syrian skies."

"Naturally, the conversation in Washington instantly became about Russian intervention and the danger of Russia 'destabilizing' the situation in Syria, an assertion that would be laughable if it weren't so deeply cynical and hypocritical, considering four and a half years of US-NATO-GCC-Israel intervention in Syria," the analyst underscored.

© AFP 2020 / ABD DOUMANY
Syrian Conflict Can't Be Resolved Without Putin – German Politicians
Ironically, while blaming Russia for escalating the conflict in Syria, Washington is usually referring to these so-called "media reports" as if it has no credible intelligence sources.

The truth of the matter is that the US leadership knows perfectly well what is going on in the Middle East, but it "is hyping the story in order to further its political position, and to weaken Russia's, by framing the debate as one of 'Russian interventionism'," the analyst elaborated.

Furthermore, some media outlets have no scruples about publishing outright disinformation, such as reports that Russia is building a 'huge' 1,000-man personnel compound in Syria or that Moscow has deployed a submarine loaded with 20 intercontinental ballistic missiles (ICBMs) and 200 nuclear warheads to Syria, Draitser noted.

The ultimate goal of this blame game is to portray Russia as an "aggressor" that is aggravating tensions in the Middle Eastern region "for its own purposes," according to the analyst.

© AP Photo / Giannis Papanikos
US, Foreign Meddling and a Fight for Oil Fueling Syrian Civil War?
The Western media is obviously making a mountain out of a molehill in its reports about Russia's provision of military supplies to Damascus: it is no secret that the Kremlin is providing the democratically elected Syrian government with aid under existing contracts, the analyst underscored, citing Russian Foreign Ministry spokeswoman Maria Zakharova.

Anyway, Russia's participation in helping the Syrian leadership is rather limited, Eric Draitser stressed, nailing the US and NATO for arming and training the so-called "moderate" fighters who wage war against the Syrian government and its population.

"The obvious conclusion is that Russia's aid to Syria has been critical in stymieing Washington's regime change agenda, thereby necessitating an active propaganda assault to demonize Moscow's moves both in regard to supplying and aiding Damascus, and its calls to form a coalition against the Islamic State and international terrorism," Draitser remarked.

"In effect, the media is working to caricature Russia as an aggressor in Syria in order to deflect attention from the fact that US efforts in Syria have failed, and that the US has no intention of effectively fighting the terrorism it continues to promote," the analyst pointed out.

Meanwhile, Moscow is urging the West to join Damascus in its fight against the Islamic State (ISIL). According to Russian Foreign Minister Sergei Lavrov, the Syrian army remains one of the most effective forces in battling ISIL in the region.

"Withdrawing the Syrian army from the fight against the Islamic State is absurd," Lavrov said in an interview to Russia's Channel One.