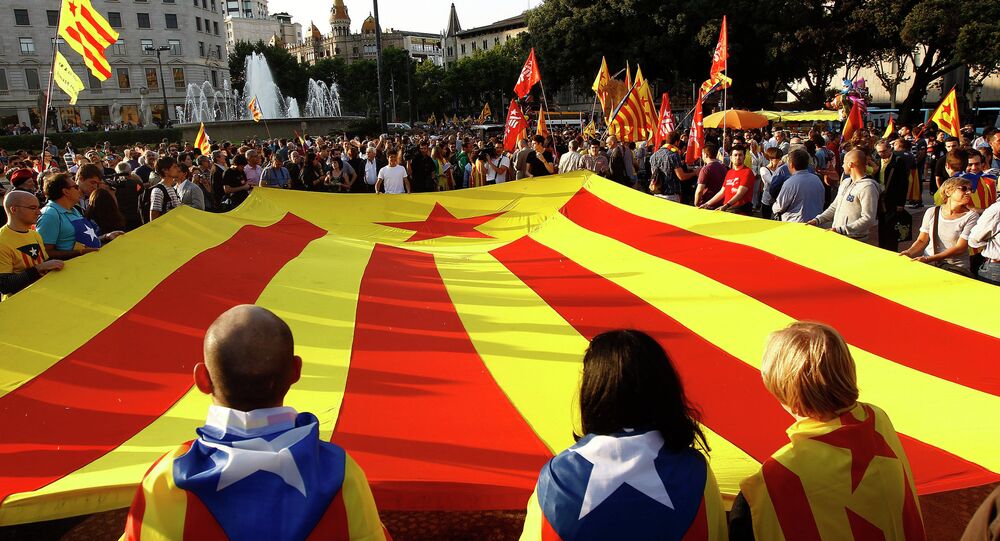 The rally's organizer is convinced that the event, called Gateway to the Catalan Republic, will be a success noting that about 500,000 people have registered in social networks to participate.

© AP Photo / Emilio Morenatti
Catalonian Pro-Independence Leader Views Annexation of French and Spanish Lands
BARCELONA (Sputnik) — A massive pro-independence demonstration to be held in Barcelona on Catalonia’s National Day, September 11, will become one of the largest rallies in the region's history, the president of the Catalan National Assembly (ANC), organizing the event, told Sputnik on Friday.

Jordi Sanchez is convinced that the event, called Gateway to the Catalan Republic, will be a success noting that about 500,000 people have registered in social networks to participate.

"We had to mobilize more buses, distribution of t-shirts and other merchandising items was more active than in previous years," he said.

In 2014, according to police estimates, 1.8 million people took to the streets of Barcelona to participate in a march that has become something of a tradition in Catalonia since the first event in 2012.

This year, the demonstration is being held ahead of regional elections on September 27. Several coalitions of pro-independence parties have pledged to set processes in motion for the autonomous region to separate from Spain by organizing an official independence referendum, if they win the vote.

According to Sanchez, the rally being held later on Friday is another expression of "a popular will to obtain the right to decide, the right to vote on the political future of Catalonia as a democratic state."

"The election on September 27 will finally turn into reality the democratic will of population to exercise the right to decide," the ANC president told Sputnik.

Prior to the upcoming rally in Barcelona, Catalonia’s independence supporters held demonstrations, organized by the ANC, in 17 cities of the United States as well as in Ecuador, Argentina, Germany, the Netherlands, Switzerland, the UAE, Australia, Colombia, Chile, Mexico, the United Kingdom, Belgium, Norway, El Salvador, France, Thailand and Canada.

Merkel Speaks in Support of Preventing Catalonia's Secession From Spain