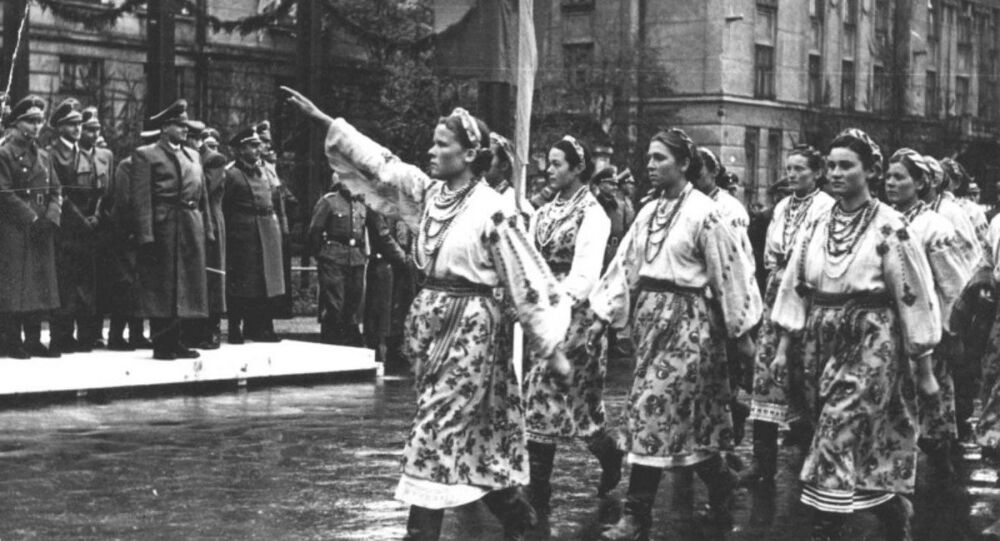 In the spring of 1939, a few months before Nazi Germany's invasion of Poland, the Organization of Ukrainian Nationalists, an ultra-right political organization seeking to achieve Ukraine's independence via violence and terrorism, formed a military unit which planned to assist the Germans in their invasion. Alas, history turned out differently.

The little-known unit, called the Military Units of the Nationalists, referenced in German documents as the Bergbauernhilfe (B.B.H), was unofficially referred to as the Ukrainian Legion, and was organized with the assistance of the Abwehr, German military intelligence, by OUN military and political leader Roman Sushko in the summer of 1939. The unit was formed to take part in battles, and to support armed uprisings of Ukrainian nationalists in the territories of eastern Poland populated by Ukrainians.

In March 1939, during the liquidation of Czechoslovakia, the leaders of the Soim of Carpathian Ukraine, the 'autonomous lands' of the former Czechoslovakia, declared their territory's independence. Hungary, which had annexed the region, sent troops into the area to crush the resistance of the Carpathian Sich –the poorly armed and trained militia comprised of Ukrainian nationalists, many of them former members of the Czechoslovak military, volunteers from neighboring Galicia, and activists from the OUN. Among the latter was Roman Sushko.

© AP Photo / Czarek Sokolowski
Busting the Myth of Polish Sympathy for Ukraine
After several days of intense fighting, the Carpathian Sich was crushed, and the self-declared Carpathian Ukraine ceased to exist. Its surviving elements managed to evade capture by the Hungarians, escaping across the border into Slovakia, Austria and Germany. These forces would end up forming the backbone of the Ukrainian Legion, which Germany planned to use in its future invasion of Poland.

In April 1939, the High Command of the German Armed Forces completed its planning for the invasion of Poland, codenamed 'Fall Weiss'. According to the plan, the 14th Army under the command of Colonel General Wilhelm List would launch an attack into southern Poland from the territory of the newly formed puppet state of Slovakia. It would be under List's army that the Ukrainian Legion was set to operate.

In June 1939, a meeting between Abwehr head Wilhelm Canaris and the leadership of the OUN resulted in an agreement on the creation of a Ukrainian volunteer unit, operating under the Wehrmacht's orders, known as the Bergbauernhilfe. The unit's primary goal would be to organize a Ukrainian insurrection against Polish authorities in eastern Poland.

Sushko was placed in command of this unit, promising to organize a force of 1,300 officers leading 12,000 men, although by mid-August of 1939 the unit comprised only an estimated 600 soldiers.

According to documents from Polish military counterintelligence, found in the Russian State Military Archive and published recently in Russian newspaper Lenta.ru, the Germans' growing coordination with the OUN was taken as a key piece of evidence suggesting the imminency of a German invasion.

Polish intelligence is noted to have picked up on the growing contacts between the OUN and the Abwehr as early as April. In mid-May, they discovered that Berlin had doubled its subsidies to the OUN, which they took to be a worrying sign that Germany was seeking to "undermine the Polish state from within" using subversive activities and sabotage.

For its part, the leadership of the OUN saw in the Ukrainian Legion the basis for a future Ukrainian army. According to historian Nikolai Posivnych, president of the fund 'Annals of the Ukrainian Insurgent Army', the organization factually "planned an uprising in western Ukraine and to declare before Germany and the Soviet Union the existence of a Ukrainian state."

© Sputnik / Alexander Mazurkevich
Hiding Dark Past: West Keeps Silent on Ukraine Forging Nationalist Identity
The Legion was initially formed outside the town of Hammerstein, western Germany, with units of the 600-man strong unit later using training camps in Germany, Austria (which by that point had been annexed by the Third Reich), and puppet Slovakia.

The Abwehr provided the unit with weapons, explosives and training assistance. The legion studied military science, topography, sabotage and the capture of strategic positions, according to a training program similar to the one used by German special forces.

The Ukrainian Legion was planned for use in in sabotage and intelligence-gathering operations to the rear of the Polish army in eastern Poland immediately following the invasion, and to encourage resistance to Polish authorities among Ukrainians living in the area. The Legion would work in sync with other OUN forces already operating on Polish territory, who by August 1939 had organized nearly a thousand well-trained fighters in Poland's east.

The unit began gathering in eastern Slovakia in July, completing their mobilization by August 22.

However, the signing of the Molotov-Ribbentrop Pact on August 23 undercut the plans of both the OUN and the German command. The pact saw western Ukrainian and western Belarusian territories occupied by Poland following the Polish-Soviet War of 1919-1921 returned to the Soviet Union, thus removing the need for the German military to conduct a sweeping campaign across eastern Poland. The Wehrmacht was thus temporarily stripped of any need for assistance from Ukrainian collaborationists.

© Sputnik / Pyotr Zadorozhnyi
Streamlining History: Ukrainian Memorial Project Presents USSR-Free Version of WWII
With the Abwehr ordering the Legion to stand down from the front line in the first days of the invasion, the unit would only wind up crossing into Poland beginning September 6, along with the second-line Slovak 2nd Division, behind the front-line German 57th Division commanded by Major General Oskar Blum. According to Slovak historian Michal Smigel, the Legion would not see any front line combat. However, according to Posivnych, they would be used to sweep for small groups of men and officers from shattered Polish formations in southeastern Poland, including in the vicinity of Lviv.

When German forces moved back from the demarcation line agreed by the Molotov-Ribbentrop Pact, the Ukrainian Legion moved back with them. The unit would briefly oversee the new border line between Germany and the USSR, before being replaced by German border troops. In late September, with the Polish campaign winding up much faster than the Germans had expected, the Bergbauernhilfe was disbanded, and its men transferred to police and security roles.

In 1943, the remaining legionnaires, many of whom would go on to assist the Nazis in their invasion of the Soviet Union, were ordered by the OUN to defect to the newly formed Ukrainian Insurgent Army, which would go on to fight against Soviet forces well into the 1950s, while slaughtering over 100,000 ethnic Poles in Volhynia and Eastern Galicia between 1943 and 1945.