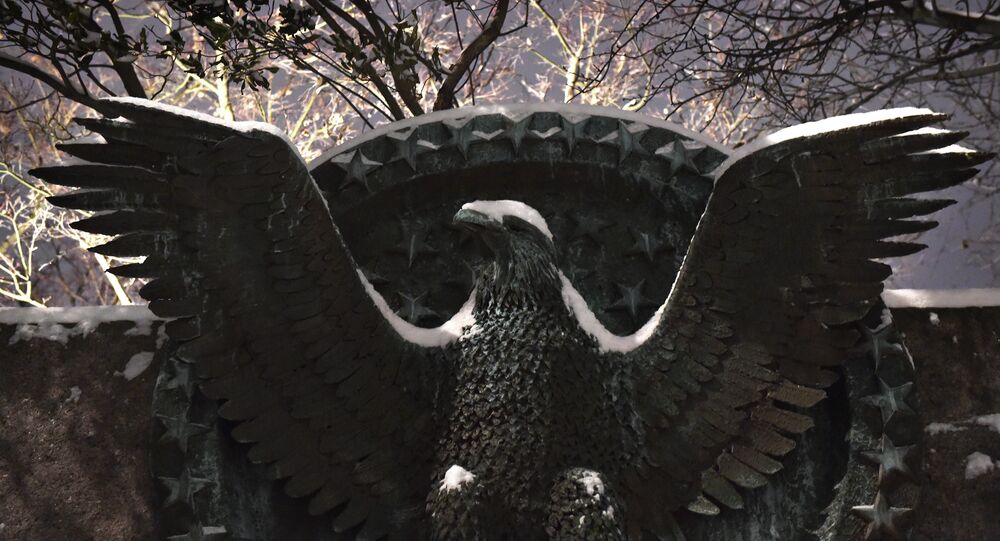 In a recent article for independent Czech online news and opinion journal Svobodne Noviny, columnist Jaromir Petrik explained why he is fed up with the media's presentation of Russia as the world's greatest threat to peace, while the US, which has launched a series of aggressive wars across the globe over the last decade, seems to get a pass.

© Flickr / peonyandthistle
War Waged Against Russia Now Being Waged Against China - Russian ex-Spy
Petrik began his piece by recalling that "this year, in his State of the Union address, President Obama named only one country as America's enemy –Russia, mentioning ISIL as another enemy. In an earlier speech, Obama equated Russia to the Ebola virus. Why is this so? Is Russia really the aggressor, responsible for destroying the Arab world through its support for the regime of Syrian President Assad? Did Russia really attack Ukraine, as we are constantly told by media resources such as Reuters, CNN, BBC and by our own Czech Television?"

"The art of propaganda," the columnist continued, "lies in the skillful propagation of half-truths, but how could Putin have unleashed the war in Ukraine? Was it Putin who overthrew the democratically elected government of President Yanukovych, planting in its place a putschist government headed by Turchynov and Yatsenyuk? Was it Putin who ordered them to start their so-called 'anti-terrorist operation' to exterminate the populations of Donetsk and Lugansk, regions which had refused to recognize the coup, and their new rulers?"

The reality, Petrik argued, was quite the opposite, with "American 'diplomats' concentrated in Kiev threatening Yanukovych against using violence against the demonstrators," while "these same 'demonstrators'" would go on to "approve a war against the population of eastern Ukraine." All the while, "those same American 'diplomats' would accuse Russia of unleashing this war."

© AFP 2021 / YURIY DYACHYSHYN
‘The US is Fully Prepared to Fight Putin - to the Last Ukrainian’
Emphasizing that Ukraine is part of a wider, global problem, Petrik noted that "more than enough has already been said and written about Iraq and Libya: These countries were attacked by NATO, led by the United States. Moreover, the 'democrats' led by the US ended up killing the presidents of both these countries, along with many members of their governments," which ultimately "plunged the conquered nations into chaos."

In the journalist's view, the crux of the issue is that "the US cannot accept the blame" for its global misadventures, "and therefore points the finger at Russia and Putin as the main culprit for global aggression. Washington has forced Europe to introduce senseless economic sanctions which, aside from Russia, have weakened Europe, but not so much the US itself."

Experts With Real Knowledge of Russia Excluded From Media Dialogue

© AFP 2021 / GIANLUIGI GUERCIA
The Economist Slams Party of Mandela for Speaking Truth on US Policy in Ukraine
Petrik recalled that the people of Western countries have been subjected to absurd levels of anti-Russian propaganda, noting that "incessant anti-Russian propaganda in the US corporate media has led to a competition to create anti-Russian and anti-Putin hysteria. The country's elite has rallied in its contempt for Russia even more forcefully than during the Cold War. At that time, dissenting voices were still tolerated. Now they have been almost completely excluded."

According to Petrik, "the reality is that anyone with any real knowledge of Russia is now denounced as 'Putin's henchman'. This includes even global academic heavyweights like Stephen Cohen. Today an odd situation has emerged where the majority of American commentators in the mass media who speak about Russia are people who have never lived in Russia, have not visited in many years, or both."

In the columnist's view, "the fact that experienced Russia watchers who really understand the country have been replaced by neoconservative lunatics who put Russia on a par with Syria, North Korea and ISIL is frankly alarming," since "Russia is not a military lightweight" which can simply be pounded into submission, "but the second largest global military power."

© AFP 2021 / FILIPPO MONTEFORTE
When Russia Plays by the West's Rules, It Loses
Petrik notes that ultimately, one of the key reasons why "the American elite hates Putin is because he allowed himself to openly oppose Washington's authority." This, combined with Washington's inability "to move away from Cold War thinking," sticking to the simple dichotomy of "Kremlin bad, enemies of Kremlin good," explains why European and American media have reached new heights in their anti-Russian rhetoric.

"The Kremlin now understands that using cooperation with the West to strengthen Russia's economic growth has turned out to be a waste of time. This explains Russia's enthusiastic attitude toward the BRICS group of countries. The same reasons have given birth to the alliance with China which, in the long term, is not in Moscow's interests," Petrik notes. "Nevertheless, Putin has calculated that humbly bowing before Washington is simply not an option."

Warning that there are other threats to the existing world order, including a rising China, the journalist concludes that it is a "real tragedy" that the people of the US and Europe, whose authorities have "unleashed and supported a wave of military conflicts destabilizing much of the world," cannot recognize that Russia is not a threat to world peace.