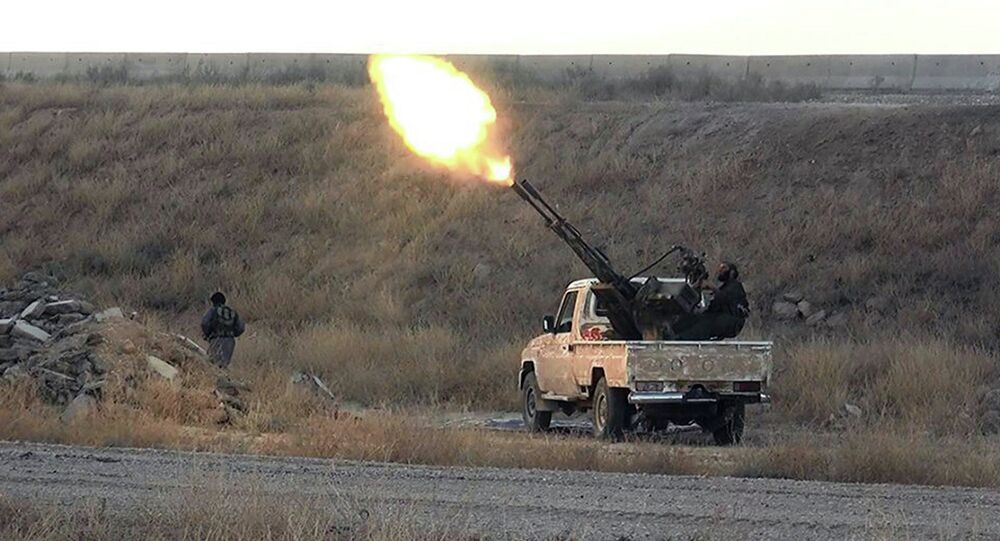 The Islamic State poses a serious threat to Russia, China, and Iran and the United States is strategically aware of it, American scholar Dr. Matthew Crosston stresses.

© AFP 2021 / HO/SANA
Bashar Assad: The Last Bastion Standing in ISIL's Way
Washington is strategically aware that the rise of ISIL (Islamic State) poses a significant threat to Eurasia's geopolitical players, most notably Iran, China and Russia, according to Dr. Matthew Crosston, a professor of Political Science and Director of the International Security and Intelligence Studies program at Bellevue University and Evan Thomsen.

The professor stressed that the popular conspiracy theory that the Islamic State was created by the United States bears no relation to reality. However, it is obvious that Washington realizes that ISIL is in some sense playing directly into America's hands in the region, the scholar adds.

China, Russia and Iran have relatively free access to this "pie." However, the United States is unwilling to allow Eurasia's geopolitical competitors to develop their energy infrastructures further.

© AP Photo / Hani Mohammed
As Saudi-Led Coalition Prepares to Storm Sanaa 'Within Days', Al-Qaeda Gains Ground in Yemen
"[T]he US can try to increase NATO presence through security commitments and public displays of force, seeking to undermine the Russian regional energy hegemony. We have already seen the public march of NATO throughout Europe. We are in the midst of developing a simultaneously overt and covert strategy of economic and energy subversion. It seems likely such a strategy would seek to align military and economic power rather than detach them," the professor remarked.

At the same time "the US has a geopolitical interest in acting as at least a partial impediment" to China's plans to explore natural resources in the Caspian region, the professor noted.

On the other hand, while negotiating with Iran, Washington keeps in mind that ISIL's growing threat in the region could make Tehran more tractable, since the Islamic State undermines Iran's economic stability and security.

"War is not just politics but economics by another means. The Caspian region, or Khorasan, is now playing host to a Gordian knot of great power politics and economics. ISIS (ISIL) is a dialectical challenge for the United States, existing both as a US foreign policy failure in the present and presenting a unique strategic opportunity in the near future… I expect that as ISIS looks to Khorasan the US will look the other way," the professor suggested.

So, maybe that is why Washington is not rushing to exterminate the Islamic State, prompting fierce criticism from Tehran and Baghdad?

The US is not the only power that is benefitting from the ongoing turmoil in the Middle East, instigated by the rise of the Islamic State. The Gulf monarchies are also interested in containing their energy rivals and Shia neighbors.

Thus far, it comes as no surprise that the Gulf States, which have repeatedly been accused of sponsoring al-Qaeda affiliates and terrorist insurgents in the Middle East, turn a deaf ear to the pleas of Syrian refugees.

Ian Bremmer, the president and founder of US-based Eurasia Group, has pointed out that Saudi Arabia, Bahrain, UAE, Qatar, and Kuwait have not raised a finger to support Syrian shelter-seekers.

'Regardless of Losses, Europe Has No Political Will to Stand Against US'

The Rise of Israel and Iran and the Failure of Sanctions