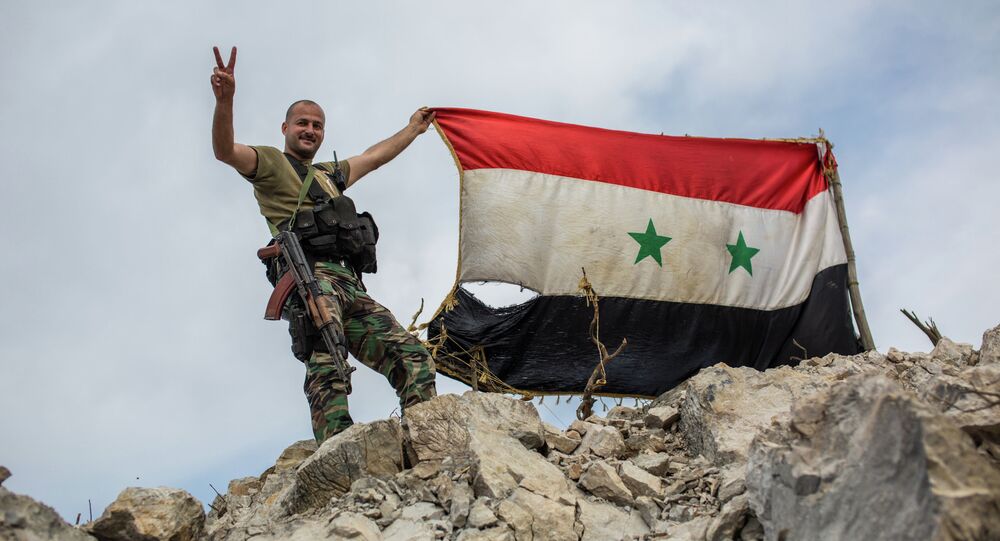 In an interview for Le Point, French politician Nicolas Dupont-Aignan noted that the West's "ill-conceived neo-colonial policy" of overthrowing secular governments in the Middle East was to blame for the disaster presently being faced by the region and by Europe, adding that if the Syrian government falls, ISIL's positions will become unassailable.

© AFP 2021 / HO/SANA
Reasonable Politicians Could Fix West's Flawed Policy Toward Syria - Assad
Speaking about the Middle Eastern migrant crisis presently plaguing Europe, Dupont-Aignan, the leader of the neo-Gaullist party France Arise, said that it's time for Paris to revise its strategy on Syria, and to abandon its plans to overthrow the secular Arab nationalist government of Bashar Assad.

"First the Americans toppled Saddam Hussein, and then the French overthrew Gaddafi. These actions exposed the catastrophic consequences of an ill-conceived neo-colonial policy. They resulted in the destruction of national governments, the imposition of Sharia law, the flow of migrants from Libya, and the barbarity of ISIL in the Middle East," Dupont-Aignan, a former member of Nicholas Sarkozy's Union for a Popular Movement, explained.

"Why repeat the mistake for a third time?" the politician pleaded. "If Assad falls, Lebanon will collapse, the Middle East's Christians will disappear, and Daesh will become impregnable. And that is not even to mention the migration chaos which will result."

© AFP 2021 / JOSEPH EID
No Solution to Syria Crisis Without Negotiation With Assad – French Politician
Dupont-Aignan emphasized that "it's necessary to urgently reconsider Paris's naïve policy toward the region; after all, support for the so-called 'moderate' opposition in Syria has led to a disaster –the weapons that were sent to them ended up in ISIL's hands. Moreover, it's time to stop subsidizing Turkey with European money, which is actually playing a double game. Ankara is increasingly fighting the Kurds, rather than the Islamic State, [while] opening the path to Greece for thousands of migrants."

Asked by the newspaper whether he was prepared to overlook Assad's alleged use of chemical weapons, widely reported on by Western media, Dupont-Aignan noted that France "must not be mistaken over who the enemy is. If the Islamic State is not defeated in the near future, Europe may come to directly face a new Hundred Years' War, which will destabilize the entire Mediterranean region and even Africa."

"As for the chemical weapons," the politician noted, "the reaction of the international community immediately forced Assad to abandon them, while ISIL, as we have learned, have been using them much more actively. It's important to be aware of [such political] manipulation!"

© AP Photo
What’s Behind Russia’s Latest Round of Syrian Diplomacy?
Asked by Le Pointe about how exactly ISIL can be defeated once and for all, Dupont-Aignan noted that the Western coalition's air operation must be complemented by operations on the ground. "The more we wait, the more this cancer metastasizes. However, this cannot be done only by the West, as this would only exacerbate the problem. The Americans, by the way, have understood this much faster than the French have, as evidenced by their reconciliation with Iran.

"All the major countries of the region must be involved in this process, instead of the sort of political prostitution we see from Qatar and the Gulf states," the politician noted. "Finally, the entire international community must be involved, and that means returning Russia to the game. In other words, our country needs to regain a truly multilateral and independent foreign policy as soon as possible!"

© AFP 2021 / ERIC PIERMONT
Syrian Foreign Minister Calls on France to Halt Anti-Damascus 'Conspiracy'
Dupont-Aignan emphasized that European countries need a "coordinated policy to pressure Turkey and to establish peace in Syria," adding that "all of this is the purview of traditional diplomacy between states. At the same time, the Schengen system, i.e. the abolition of national borders within the European Union, is largely to blame for the current chaos of migration. It has led to irresponsible behavior on the part of the EU's border states, which do not prevent illegal immigrants from entering if they do not plan on remaining on their territory. As a result, France, the country with the world's most generous social system, has to accept more migrants, while Germany, which is going through a demographic crisis, takes in young workers. But all of this cannot last forever."

The politician warned that "with nearly a million migrants a year, the system is collapsing before our very eyes. Only the restoration of national borders will be able to deter the migrants and their smugglers. The EU's chronic impotence should have alerted us a long time ago to the fact that when history picks up the pace, only nations are capable of action."