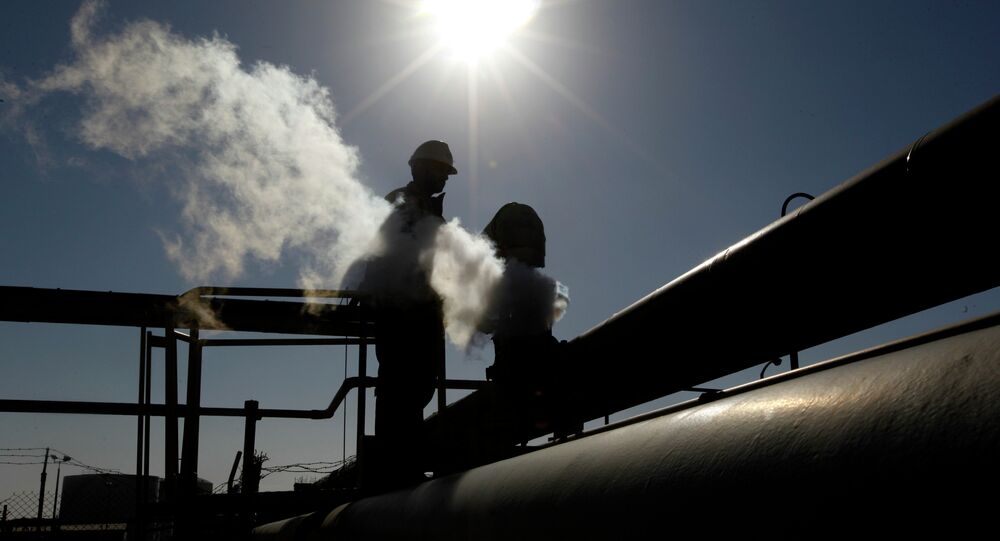 China’s economic slowdown and a global oil supply glut led by high production in the United States will keep global oil prices depressed for the near future, experts told Sputnik.

WASHINGTON (Sputnik) – Oil prices reached over $100 a barrel in the summer of 2014, before dropping nearly 50 percent. A rally in prices since March fizzled by late June, when oil hovered around $60 a barrel, as oil inventories remain high and demand struggles to pick up the slack.

“The Chinese economy is really slowing down and this has had a domino effect on international oil markets,” Lordanis Petsas, the chair of the Department of Economics and Finance at the University at Scranton, told Sputnik on Friday.

As the world’s second largest economy and third largest importer of oil, China’s economic slowdown is reverberating through oil markets, the professor said.

© AFP 2020 / JEFF PACHOUD
Oil Crashes to Lowest Price in Six Years on China Fears
At the same time, “US oil producers continue to pump out record quantities of crude while Canadian production and exports are also rising,” Petsas said.

Benchmark West Texas Intermediate Crude is priced at around $40 a barrel, while Brent is trading at near $46 a barrel. Both indexes are at multi-year lows.

Petsas estimated that the oil price could drop into the $30 to $40 per barrel range and not recover to around $60 per barrel for some time.

“We also have to ask, at what point do oil prices get too low,” he noted.

© Flickr / Steven Straiton
Lifting US Oil Export Ban to Come at High Environmental Cost
“Commodity prices are notorious for their fluctuations, so it’s hard to say how low they may fall,” he told Sputnik.

Dossani also agreed that falling growth rates in China were a major part of the problem.

“I think a decrease in the rate of growth in countries like China is part of the story,” he said. “The other part of it might be that investors are starting to invest less and less in commodity speculation now that there is some growth in other sectors.”

The current oil price drop is a correction after a decade of optimism and growing speculation, Sameer noted.

“For the past 10 years we may have been experiencing something like a commodities bubble as investors flocked to oil and other commodities after the collapse of the housing bubble in 2007,” he added.

However, Sameer expressed his confidence that inevitable long-term demand for oil would lead to a price recovery.

“Given that fossil fuels are a finite resource and given that we have to move away from oil as a source of fuel and towards a carbon neutral global economy, yes oil prices will have to rise again at some point either through the market or through better regulation,” he pointed out.

He added, “If oil companies were paying the true cost of what society pays to fuel our addiction to fossil fuels, prices would go way up.”