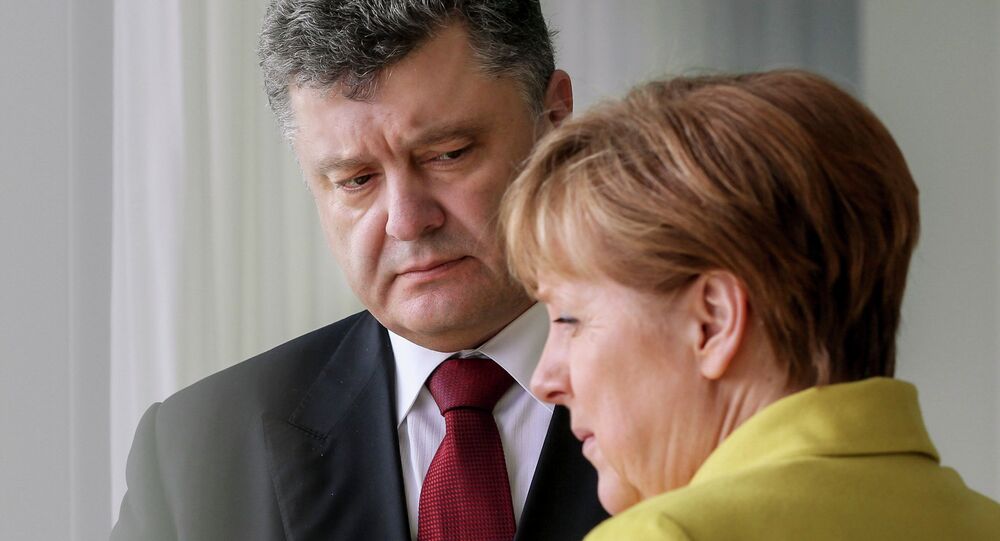 An upcoming meeting between the leaders of France, Germany and Ukraine in Berlin, scheduled for August 24, may be aimed at coercing Ukrainian President Petro Poroshenko into fulfilling his Minsk II obligations, Director of the Center of Political and Conflict Studies in Kiev Mikhail Pogrebinsky claims.

In an interview to EurAsia Daily, Director of the Center of Political and Conflict Studies in Kiev Mikhail Pogrebinsky shared his views regarding the upcoming meeting between the leaders of France, Germany and Ukraine in Berlin.

Pogrebinsky stated that the forthcoming meeting cannot be classed as a "Normandy" format summit.

"According to Ukraine's Ministry of Foreign Affairs, this meeting is Poroshenko's initiative, and he invited [German Chancellor] Merkel and [French President] Hollande to Kiev, but they have not arrived and [therefore] he will go to [Berlin]," Pogrebinsky elaborated.

"But from my point of view this meeting was initiated by [Russian President] Putin, Merkel and Hollande. It only makes sense to hold a summit without Putin… if they aim to exert pressure on Poroshenko, there can be no other reason," the expert underscored, adding that, in his opinion, Petro Poroshenko's politically incorrect verbal attacks against Russia and the Kremlin made him a pariah in the eyes of the Russian leadership.

© AP Photo / Andrew Kravchenko, Pool
Kiev's Renewed Assault on Donbass to Trigger US-Russian War – Stephen Cohen
Pogrebinsky suggested that Putin regards Poroshenko as Merkel's and Hollande's "headache." Citing European diplomats whom he met in Kiev, the expert emphasized that the German and the French leadership have clearly realized that the Ukrainian President is not fulfilling his obligations under the terms of the Minsk II agreement.

"They [European diplomats] avoid discussing the issue publicly, but they have raised the question with [Ukrainian] lawmakers and talked it over with me in private conversations, [that is why] I understand clearly that they know about it," Pogrebinsky said.

© Sputnik / Vitaliy Belousov
DPR Urges France, Germany to React to Kiev's Minsk Agreements Violations
According to the expert, Petro Poroshenko would try to convince Merkel and Hollande that he cannot meet the Minsk requirements since he is unable to maintain control over the situation in Donbass, and in some sense this is not far from the truth, the Pogrebinsky noted.

The point is that he is not making efforts to de-escalate the situation in eastern Ukraine, but aggravating further tensions in the region.

In light of this, "Merkel's and Holland's mission will be to stop [Poroshenko] and bring him to his senses," the expert emphasized.

Better Late Than Never: West Starting to Accept Crimea as Part of Russia