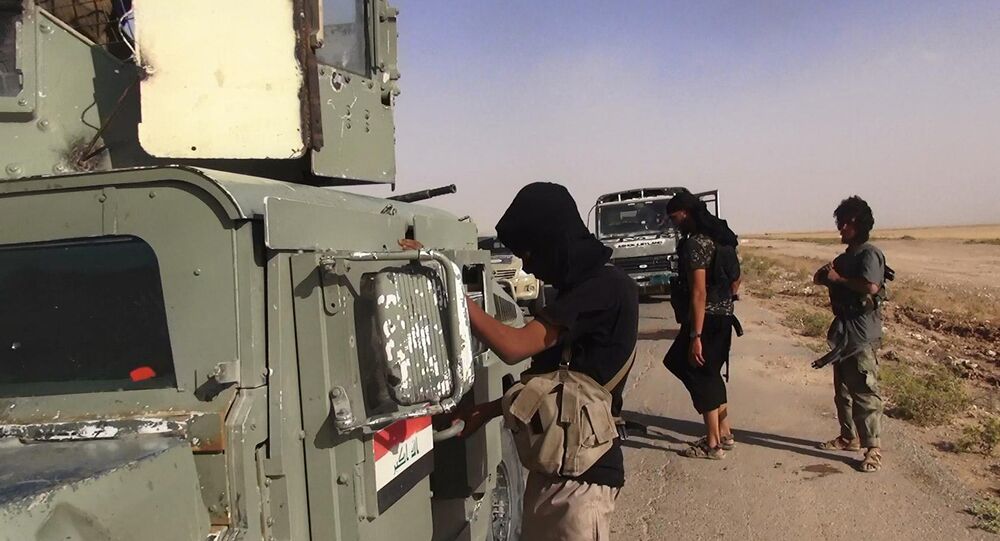 Commenting on the former DIA head's recent admission that US intelligence had known that Jihadi groups which have now metastasized into ISIL have been active in Syria since at least 2012, geopolitics analyst Eric Draitser told Sputnik that the US use of Islamist militants to attempt to overthrow the Syrian government comes as no surprise to anyone.

© Sputnik / Eduard Pesov
Military Action Against Assad's Regime May Lead to ISIL Power Grab - Lavrov
Draitser, founder and editor of stopimperialism.org, noted that "the United States has been pursuing a regime change agenda in Syria really since 2011, but the agenda they were following has not panned out as it did in Libya." The analyst noted that while "in Libya [the US and its allies] were able to use their proxies connected with Al-Qaeda and other extremist groups to overthrow Muammar Gaddafi…in Syria it's been a very different scenario. The Syrian government has managed to withstand these attacks; they've managed to carry on the war more than four years now, and so the United States has needed a new [strategy] in order to achieve that geopolitical objective."

"Make no mistake about it: the removal of Assad's government in Damascus is really what this is all about," Draitser noted. "The emergence of the Islamic State in the last two years has provided a convenient pretext for the United States to be able to continue to pursue the same agenda."

Citing retired former Defense Intelligence Agency director Michael Flynn's recent interview for Al Jazeera, where the official admitted that the US did not interfere with the rise of Jihadist groups in Syria, despite knowledge of their existence dating back to at least August 2012, Draitser noted that "we [now] have documented evidence from the Defense Intelligence Agency –the memo which is now public information, that the United States knew about the rise of the Islamic State all the way back to 2012, and that they were willing to allow this extremist Salafist group to develop for the purposes of capitalizing on it in Syria. That's what the United States has known from the beginning, and that continues to be the strategy."

Turkey and the Buffer Zone

© AP Photo / Vadim Ghirda
Turkey Protecting ISIL to Limit Kurdistan Workers' Party - PKK Leader
Moving on to comment on Turkey's ever-growing role in the Syrian conflict, Draitser noted that the US has benefited from Ankara's involvement, saying that the idea of the buffer zone merely serves to create a series of "safe havens for their proxies in northern Syria." The expert explained that Ankara itself has "capitalized on this in other ways, by using it to extend their fight against the Kurdish Workers Party –the PKK, and other elements in that area."

Draitser has absolutely no faith in the buffer zone, telling Sputnik that "it will work [only] in the sense that it will prolong the war, preventing the Syrian Arab Army and their Hezbollah allies from being able to mop up any remaining opposition," while providing "continuing support for the so-called [moderate] rebels –the non-Islamic State extremists that the Saudis, the US and others have been financing and supporting."

As to whether the buffer zone will assist Assad's enemies in deposing the Syrian government, Draitser does not believe that this will be likely either, noting that Turkey has in fact "now waded into open conflict, and are now reaping the rewards of that –that is to say the terror attacks in Istanbul and other parts of Turkey, which is the quite predictable blowback of Turkey's direct involvement in this conflict."

Draitser recalled that "Turkey has been involved in this conflict from the very beginning…providing safe havens to the extremists, and funneling arms across the border, working with the Syrian Muslim brotherhood, as the New York Times reported, and with others, but now that they're openly involved in a shooting war inside Syria, they will now face the consequences, as we've seen in the headlines in recent days."

No Diplomatic Solution Without Assad

© AFP 2021 / YURI KADOBNOV
Saudi Arabia Backs Political Settlement in Syria Without Assad
Asked about the future of Syria, and how much longer the bloody conflict can possibly last, Draitser explained that "Syria is not going to be able to simply end this militarily…There's going to need to be some kind of political solution." The expert praised "the Syrian Arab Army, to Hezbollah and their allies, who have now fought this war for four years to a standstill, to the point where the United States and its regional allies who have been backing terrorist elements in Syria are simply unable to win militarily."

Draitser believes that the Syrian government will now need to continue "to fight until a political solution can be reached," noting that hope in this regard can be found in Moscow. The expert argues that Russia's "diplomatic drive with the Saudis, with Syria and Iran, trying to unite all of these elements and using the Islamic State as the galvanizing force –this is really for the purposes of getting some kind of a lasting solution for Syria."

Noting that it will be impossible for the Syrian government to be deposed by military means alone, Draitser believes that "what the Saudis and their allies in Washington would like to do is to force Russia into a diplomatic corner so that they abandon Assad and move toward some form of 'transitional government' or 'transitional stage'." The expert does not believe this to be a likely outcome, noting that it would serve as a "tremendous diplomatic defeat for Moscow."

Ultimately, Draitser believes that "the most likely scenario is that this conflict will continue, with the Saudis continuing to play their diplomatic double game, while Moscow continues to back Damascus and their allies in Tehran, until such time that the Saudis are willing to abandon the fanciful notion that Assad is not going to be part of a diplomatic and political solution…Once that happens, there could be an end to this war."