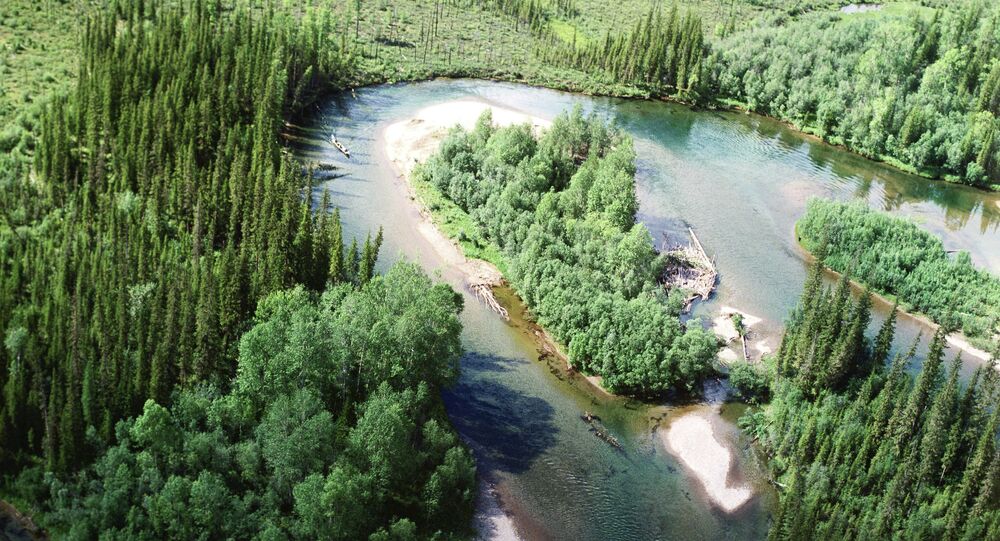 A recent article published in the US business magazine Quartz argues that an "uptick of nationalism" in Siberia threatens to break up the Russian Federation.

© Photo : https://www.youtube.com/channel/UCvAtlvq-hywjMXm9uFpfsuA
Meteorite Craters or UFO Bases? Look at Mysterious Giant Craters in Russia
In his article, republished by Quartz from online news and opinion magazine Muftah, independent journalist Bradley Jardine says that Siberia's history of non-conformism has led its "inhabitants, including its ethnic Russian population, [to develop] a very distinctive identity –a sort of swash-buckling frontier spirit akin to American pioneers." The journalist argues that this "sense of nationalism," which had its origins in the 19th century, has recently intensified.

Jardine cites Siberians' apparent anger over the federal government's unfair distribution of tax revenues, along with the old news item of "Vladimir Putin's centralizing reforms," which he says have "inflam[ed] hostility toward Moscow." It's worth pointing out here that Russia returned to a system of direct elections for its regional governors back in 2012, and that the tax revenues issue is literally older than the Russian state itself, first emerging back in the Soviet period.

It is in this apparent Siberian hostility to Moscow that Jardine sees a "potent national movement" growing up "in larger Siberian intellectual centers like Novosibirsk, Tomsk, Omsk, and Irkutsk," citing the example of a 2011 protest rally in Novosibirsk, where demonstrators gathered to chant the slogan "Stop Feeding Moscow!" and demanded that Siberia receive a larger share of the revenues from hydrocarbons.

Noting that "the movement was unsuccessful," Jardine argued that the protest (which, incidentally, gathered only 50-70 people) "seriously ruffled Moscow's feathers," adding that a similar proposed 'March for the Federalization of Siberia', was banned by "central authorities," who arrested organizers and imposed a "widespread media blackout on the region." In actuality, it was the local mayor's office that banned the march, which had planned to attract about 350 people in the city of 1.5 million. Local media freely reported that the march was prohibited because organizers hadn’t bothered to fill out the paperwork to hold it.

After making a mountain out of a couple molehills, Jardine concludes his analysis by noting that "if the status quo continues –and Siberians continue to feel exploited by the central government –the Russian Federation may be faced with a serious political crisis."

© Sputnik / Alexander Mokletsov
Siberia Home to New Russian Space Monitoring Complex
Jardine's commentary echoed that of Wilson Quarterly contributor Elizabeth Peet, who stated in an eerily similar article published earlier this month that "Vladimir Putin's ever-more-centralized regime" has "contributed to a resurgence of regional pride across Siberia, as demonstrated in the popularity of the 'I'm Siberian' brand [of t-shirts] among Siberia's younger generations."

The headache-inducing semantics of calling the small movement of ethnic Russian Siberian autonomy supporters "Siberian nationalists" aside, at least Jardine's article had the courtesy to make note of the fact that the autonomy movement is based mainly "among the region's ethnic Russian population." As for the region's indigenous groups, who are presumably unaware or un-interested in the movement, Jardine explained that the groups are "more rooted and connected to local towns and villages."

© Sputnik / Igor Mikhalev
Stratfor's Global Forecast Report Torn to Bits by International Analysts
Still, there isn't really anything surprising about in the histrionic tone of Jardine and Peet's articles. Earlier this year, Texas-based intelligence group Stratfor (whose work Jardine cites in his article) presented its 'Decade Forecast: 2015-2025', a report which predicted the enduring power of the United States and Russia's imminent demise. The report explained that fluctuations in energy prices would reduce "Moscow's ability to support the national infrastructure," resulting in the fraying of "economic ties binding the Russian periphery" and causing Siberia to "move independently" toward "links with China, Japan and the US." And if a respected and influential think tank like Stratfor can dream big about resource-rich Siberia breaking off from Russia and becoming an independent state, what's wrong with a couple of analysts writing articles about the very same thing?

There is something to be said about discontent among the resource-rich Russian regions stemming from the perceived unfair distribution of tax revenues, which local nationalists and political demagogues have played upon since the late Soviet period, claiming that 'their national republic/region/autonomous zone subsidizes everyone else, and that everyone would be richer and better off by separating'. But while the argument continues to be used by a sprinkling of Russian nationalists and liberals, most recently in a 2011 campaign demanding that Moscow 'Stop Feeding the Russian Caucasus', it is highly unlikely that the issue of taxation could lead to the formation of a serious movement for autonomy or independence, especially in Siberia, where the majority is ethnically Russian. In any case, a recent study by Russian news and analysis weekly Argumenti i fakti found that in 2014, only about a dozen regions made due without federal financial aid to complement local budgets, with most of the country's regions, including those in Siberia, receiving subsidies as part of the government's effort to equalize spending.

Idea of 'Siberian Nationalism' Gets a Laugh From Russian Readers

Jardine's article, which has since been translated into Russian and published on RT's InoTV, became a source of amusement for its Siberian readers, who commented on the absurdity of the ideas it contains, and argued that journalists shouldn't write about issues they know nothing about.

A user named Dmitri from the city of Tomsk sarcastically commented that having "lived in Siberia for 30 years, this is the first time I have heard about the 'Siberian National Movement; same goes for the 'March for the Federalization of Siberia' and the apparent 'mood in Siberia favoring separating from the federal center'. The author has truly opened my eyes to what's really going on in my native land."

Youtube / RuptlyTV
Siberians in Bikinis Hit the Slopes, Set World Record
Another user, called Yana, echoed Dmitri's irony, noting that she "has always found it amazing how people who cannot find Siberia on a map know more about our lives than we do. From Siberia with Love!" Sergei added that "as a Siberian, I am getting a huge kick out of this article. Author: time to leave the parallel world you're living in!"

Pavel wrote, "there is no 'Siberian nationalism', and I say this as a Siberian. Even if there are a few radicals, their percentage is negligible. The absolute majority of people here feel that they are Russian, and do not amuse themselves with such silly ideas."

Verba, hailing from Novosibirsk, noted that "this is the first time I'm reading about the 'big rally' of 2011…As for the ludicrous 'March for Federalization' of our already federal (!) region, it was not forbidden. The organizers simply 'forgot' to file the paperwork. Boy have they made a lot of noise about it afterwards though."

Stanislav joked that "the rich mineral wealth of Siberia does not give these foreigners any peace. I have heard these fairy tales [about Siberia breaking off from Russia] since the 90s." Alex added that the "the idea here is clear –to create a false nation to oppose Russia and to gather the fruits from the conflict which results." Martin capped off the commentary, urging everyone not to worry and noting that "we Siberians would be a tough nut to crack. We live in a calm, measured way, and do not give in to propaganda…Siberians will not tolerate any turmoil."

Putin on Vacation in Russia's Siberian Republic of Altai