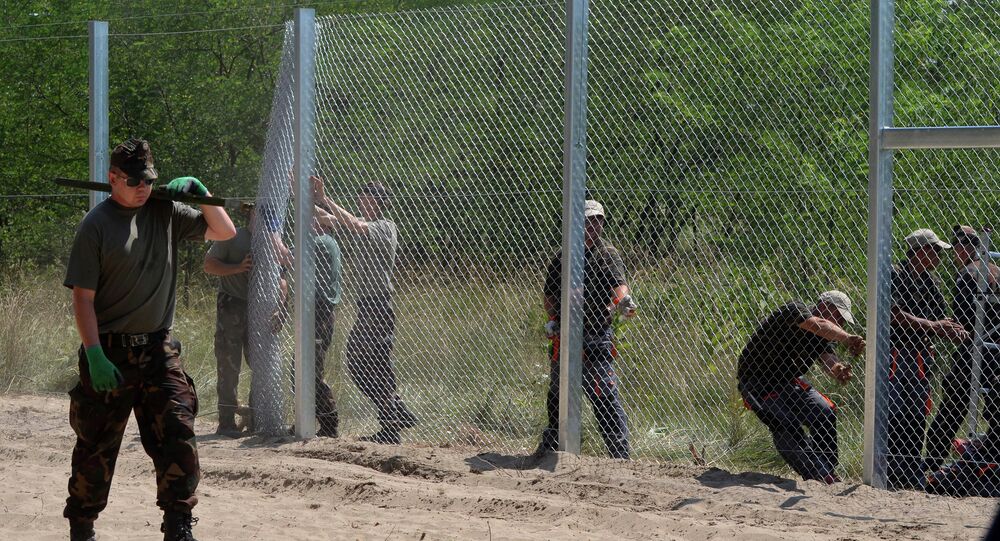 Hungary’s plan to stem the rising flow of undocumented migrants arriving from the Middle East and Africa by fencing off its Serbian border is part of an EU-wide effort to boost border security, European experts told Sputnik.

"Without permission from stronger EU states, if not from across the ocean, Hungary would not have been able to do this on its own."

© AFP 2021 / DIMITAR DILKOFF
Bulgaria to Complete Anti-Immigration Fence Along Turkish Border by 2016
Martin Braxatoris, co-chairman of the Slovak information portal DespiteBorders.com, told Sputnik that Hungary’s bid to curb illegal migration was a small part of the bigger picture that is EU concern over the number of migrants fleeing to Europe in recent months.

Tens of thousands of undocumented migrants have entered Europe clandestinely since 2015 as they flee conflicts and economic hardships in their home countries. They risk journeys on perilous land and sea routes, with hundreds recorded deaths in the Mediterranean Sea this year already.

Braxatoris said that migrants who do manage to make it to Europe often find themselves stranded in the EU country of their first point of entry, unable to reach their final destination, a situation which regularly gives rise to riots at migrant camps.

"European countries are trying to come up with a coordinated response to this problem, and bilateral ties between countries – in this case, Serbia and Hungary – don’t play a role in this," he said, adding Slovakia’s stance was that refugees should be taken in voluntarily, not forced upon EU nations.

Both experts agreed that Serbia’s bid to join the European Union has failed, and in this light, the fence with Hungary has symbolic significance. Yet, they assert that tighter border controls on EU external border in Eastern Europe are aimed at stemming the flow of migrants and not directly targeted at Belgrade.

© AFP 2021 / CSABA SEGESVARI
Hungary to Build Anti-Migrant Wall on Serbian Border by December
Gajic noted that, although Budapest’s attempt to fence off Serbia could put a strain on bilateral ties, it would not seriously undermine them as they have ongoing joint infrastructure projects. These include the anticipated Serbian and Hungarian pipelines to bring Russian natural gas to Europe and construction of the Chinese-built high-speed railway that will link the Greek port Pirey with Budapest through Macedonia and Serbia.

Hungary's work to build a 110-mile fence on its southern border began on Monday amid warnings that human traffickers will find other smuggling routes into Hungary and into more affluent European nations, namely via Slovakia or Romania.