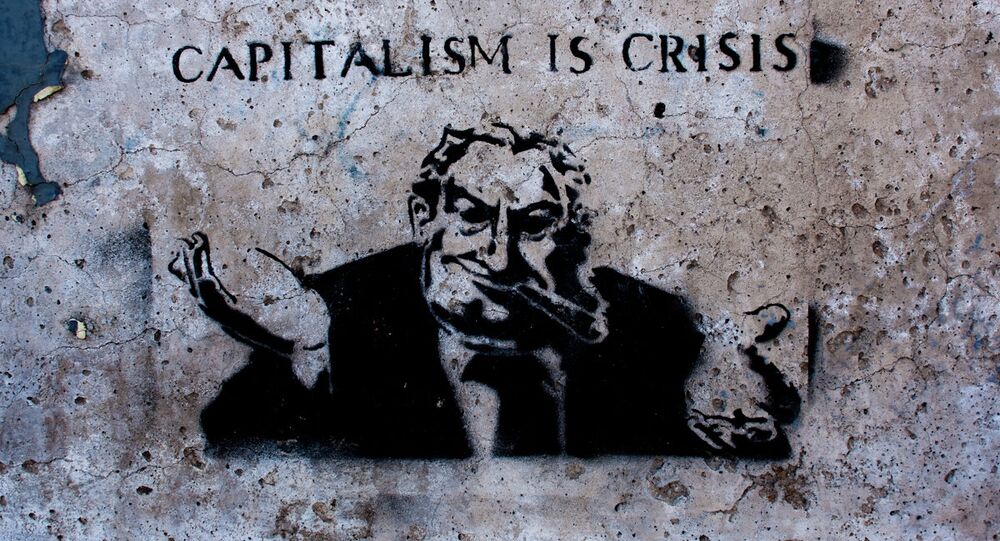 The Greek population has been faced with the Eurozone financial elite's double standard approach and the phenomenon dubbed "dictatorial capitalism" by US publicist Eric Zuesse.

© Flickr
Who's Blame for Greek Crisis? Goldman Sachs Takes Heat
There is the gaping abyss between two kinds of capitalism — a "democratic" and a "dictatorial" one, American author and investigative historian Eric Zuesse explains, stressing that the case of Greece illustrates how "dictatorial capitalism" actually works.

Citing New York-based journalist Mark Whitehouse, the investigative historian underscored that from 2009 to 2014 private investors had been selling Greece's governmental debt to the European governments, "so that, when Greece will default (which it inevitably will), the taxpayers of those Western governments will suffer the losses."

The publicist also noted that the Greek people did not receive the EU loans, while "what got bailed-out was private investors" — mostly German and French banks.

Meanwhile, Greek consumers were forced to carry the burden of austerity imposed by the International Monetary Fund (IMF). "This is even a condition, a requirement, of such 'bailouts'" imposed by the aristocracy's system, also known as "dictatorial capitalism," Zuesse noted. The austerity measures dealt a lethal blow to Greece's fading economy, rather than fixed it.

© AP Photo / Virginia Mayo
Greece Finished? Finland MPs Want Greece to Withdraw From Eurozone
What makes matters even worse, Greece's "kleptocracy" has also made a big contribution to the ongoing crisis. Quoting independent economics-writer Charles Hugh Smith, the US analyst pointed out that Greece's corrupt elites benefitted from the country's deplorable condition, transferring billions of euros to their private accounts in Switzerland. Remarkably, Greece's authorities turned a blind eye to that.

"In way of contrast, democratic capitalism is bailing out only the public, when times go bad, just like FDR did during the Great Depression, and like socialist countries (Norway, Sweden, Denmark, and Finland, being examples) still do," Zuesse elaborated.

© Photo : NATO official website
Why NATO Fears 'Grexit'
However, the Greek population, hit by both severe economic policies and the debt crisis receives no sympathy from Greece's creditors, particularly Germany.

Curiously enough, Berlin itself suffered from a series of debt crises after the First and the Second World Wars. Fortunately, Germany's debts were restructured and forgiven in some ways by the country's creditors, which went a long way towards facilitating the state's rapid economic growth.

"The main creditor demanding that Greeks be made to pay for past profligacy benefited not so long ago from more lenient terms than it is now prepared to offer," US financial reporter Eduardo Porter highlighted.

"But beyond serving as a reminder of German hypocrisy, the image offers a more important lesson: These sorts of things have been dealt with successfully before," he added.

Do you think Germany is being too hard on Greece?
Voted: 16
All polls
Both authors emphasized that Greece should have been allowed to default five years ago, when its debt amounted only to 110 billion euros. Today, after years of IMF-imposed austerity, its debt has eventually reached 323 billion euros.

But back in 2010 Greece's creditors did not want "to take a hit from a Greek debt write-down" demonstrating "political cowardice," Mr. Porter pointed out.

There are certain ways to deal with the problem, but it seems that neither Eurozone's creditors, nor Greece's financial elite is willing to cut the Gordian knot of the country's debt crisis.

The international plutocracy is interested in the weakening of national governments and lowering the public wage, Eric Zuesse pointed out.