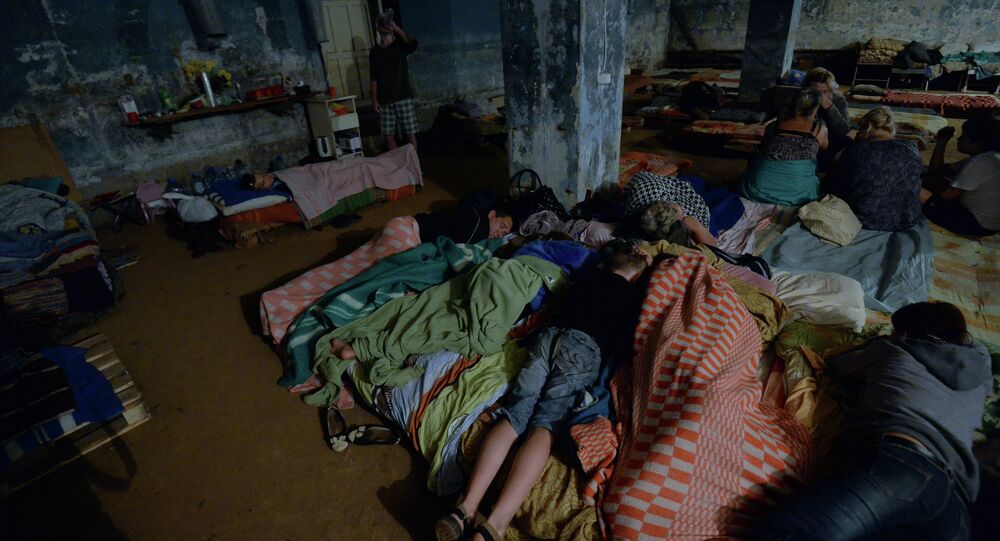 Kiev Doing Whatever It Takes to Asphyxiate Independence Movement in Donbass

The Ukrainian government is trying to asphyxiate the independence movement in the Donbass region through a full-out economic blockade, Polish war correspondent David Hudziec notes.

© AP Photo / Evgeniy Maloletka
Kiev Can't Get Donbass Back Through Economic Blockade – French Media
Regulations imposed by Kiev are suspending the supply of food and medicine to the breakaway republics of Donetsk and Lugansk; it seems the Ukrainian government is determined to give the Donbass region the treatment Leningrad received during the Second World War when it fell prey to a deadly 900-day siege, independent Poland-based journalist and publicist Konrad Stachnio notes.

In order to shed some light on the present situation in the Donbass region, Stachnio asked Polish war correspondent David Hudziec, who spent almost nine months in the besieged territory, to give his comments on the issue.

"Now they will be trying to torment Donbass not by bombing which in fact consolidated the local Russians, but by economic attrition. The government in Kiev either realizes that this conflict cannot be solved militarily or it simply does not want to go on that way. Therefore, they are trying to do it economically. The idea behind this is that if people on the other side of the cordon see that the Donbass economic situation is worsening then the [independence] movement will fade away," Hudziec elaborated, as cited by the publicist.

© Sputnik / Taras Litvinenko
Kiev to Enforce Complete Blockade Over 'Cancerous Tumor' of Donbass - MP
According to Hudziec, the self-proclaimed Donetsk and Lugansk People's Republics (DPR, LPR) have no other choice but to "pass all trade on to the Russian side and to trade with Russia." Although there are price and monetary differences between Russia and the republics, it is the only light at the end of the tunnel for the people of DPR and LPR.

The war correspondent also noted that the so-called opposition block in Ukraine — the former Party of Regions — has recently released a statement denouncing the blockade of Donbass as "illegal, unjustified, and unethical," claiming that both the blockade and hostilities against the people of eastern Ukraine "should be discontinued."

"If the opposition in Ukraine stopped being afraid we could expect some changes, but I do not think that will happen soon, certainly not sooner than with new elections as there will not be another Maidan, there are no longer any sponsors to finance it," Hudziec pointed out, as quoted by Konrad Stachnio.

© Flickr / U.S. Army Alaska (USARAK)
Ukraine Wants 1,000 Javelin Systems in Exchange for Nuclear Warheads
Earlier this month Poroshenko Bloc leader Yuriy Lutsenko claimed that the two self-proclaimed republics should be subjected to a complete economic blockade, labeling them a "cancerous tumor." The blockade has already borne its bitter fruits: the isolation has resulted in the doubling of food prices in the region, while corruption at the border checkpoints has increased tremendously.

About a month ago Ukrainian President Petro Poroshenko announced that the economic blockade of the LPR and DPR would be lifted only if Kiev restores its control over the Russo-Ukrainian border in the east, turning a deaf ear to the fact that his proposal violates the Minsk II accord.

© Sputnik / Alexandr Demyanchuk
Fire Sale, Everything Must Go! Ukraine Puts 345 State Firms Up For Sale
Meanwhile, Kiev has halted the supply of life-saving medicine to the breakaway republics, namely, anti-HIV/AIDS drugs. There are almost 16,000 HIV-positive people in DPR;  4,000 of them are suffering from full-blown AIDS. Furthermore, there are at least 2,300 people with active forms of tuberculosis (TB), including 500 with multi-drug-resistant TB, according to Human Rights Watch.

Nikolai Grazhdanov, the Donetsk Regional Center for AIDS Prevention and Control's chief medical officer, stressed that the region's HIV-positive patients will be provided treatment only until August, if Kiev does not resume deliveries of drugs.

In March, 2015 Human Rights Watch informed the Ukrainian government that patients receiving treatment for HIV, tuberculosis, and opioid substitution therapy (OST) in the Donbass region are "facing interruptions of life-saving treatment" and urged Kiev to take all necessary measures to help these patients.

However, the Ukrainian government has yet to raise a finger to solve the problem, and is doing whatever it takes to asphyxiate the independence movement in the Donetsk and Lugansk Republics.