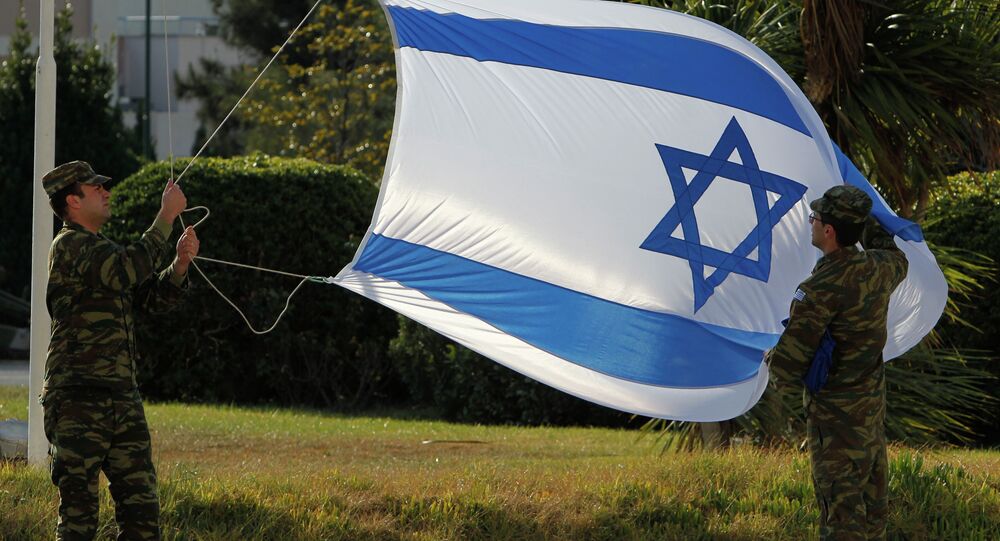 Israeli political expert Avidgor Eskin told Sputnik why Greece should look to Israel for new opportunities because of its lack of commitment to the European community.

It is 25 years of Israeli-Greek diplomatic relations this year. Ambassador Spiros Lambridis made these comments: “Europe has been plunging in an equally severe crisis over the last years, a deep shock that is not purely and solely economic but that, alas, is damaging its social, cultural and moral cohesion, seriously endangering the democratic and ethical values on which it is founded. In this gloomy context, Greece’s ever-blooming affiliation with the young, daring and innovative Israeli society is infusing our aging productive structures and old-fashioned state bureaucracy with new, “out of the box” ideas and methods.” But as a matter of fact relations go back 2000 years. May I have your comments on that?

© Flickr / Antonio C.
Greek Exit from NATO Could Alter Established International Order
The most important sign of the relations was the visit of Greek Foreign Minister on the next day after the referendum, after there was a crucial historic vote in Greece against being totally incorporated into the European society and into this spirit of globalism. Just a day after Greece showed that it want to be more independent. This isn’t an occasional event when top-level negotiations start like that. Greek FM knew that he will get support from Mr. Netanyahu, because he is also not a fan of globalization and this new international order, which Israel faces from all over. These negotiations were primarily on security issues as well as economic ones. Israel and Greece are going for new economic and security issues. It’s not a secret that even as the situation between Greece and Turkey is quiet and cool now, there is a conflict between them and not for one day. And the fact that Israel and Turkey today also face very hostile mutual attitudes, especially from the side of Turkey – also helps for good relations between Israel and Greece. So Greece made its choice by going to Israel — a non-conformist and non-European community and non-globalist.

Whatever the outcome of the Greek situation, the relations will stay the same?

Yes, but we are talking about new opportunities for Greece. Because Israel is not committed to the European community and Israel can develop relations with Greece independently. So Greece can get access to top notch high tech, medical, agriculture technologies etc. Greece will have the Israeli market opened and it would be crucially important for Athens now.

We are about signing few contracts now, that has to deal not only with drones, but also with some artillery equipment. It’s a very promising field for our cooperation.

© AP Photo / Thanassis Stavrakis
Greece Condemns Attack Against Israeli Embassy in Athens
There will be some military maneuvers I believe?

This is one of the plans that show mutual trust and cooperation.

There is also a plan on doing some training when it comes to Greek airspace?

Yes, this is something being discussed right now.

Let us look ahead at trade relations. There seemed to be all kinds of opportunities?

First we can discuss everything that has to do with high-tech. Greece will eventually have problems in Europe and Israel can be an alternative market. It can give many answers to today’s Greece needs. One of the problems is that Greece is on a very low technical level. Some Israeli involvement can be crucial for them also in the field of agriculture. Israel is very experienced in this field, climates are similar and it is very easy to learn what needs to be done. Greece need to improve its medical system and Israel can help here as well. This is the basis of our future relations and our trade and political partnership.

There will be some financial revenues opened for Greece, taken into account the special needs of Greece. This will be decided on the Governmental level. Finance ministers will have to work out how to bring cash into all these operations, minding that the Greek economy is near bankruptcy. Israel can also be very helpful in bringing some investments to Greece from different countries. It is a very promising partnership.

© Sputnik
Same Ol' Story: Hillary Clinton Stands in Opposition to Boycott Effort Against Israel
Hillary Clinton recently said that the US has to be much smarter when dealing with Vladimir Putin. This isn’t he first time that Mrs. Clinton has spoken like this. Does she believe that this will help solve the already strained relations between Russia and US?

What we hear now from Hillary Clinton is a different style. Just three months ago she compared the Russian President with Adolf Hitler, which was a very low mud-throwing operation. Perhaps now she realized that being a candidate for the US President — means that she has to keep her mouth cleaner than in that case. Her last speech was very clean, full of hostility towards Russia, but with some understanding that she will have to deal realistically with the Kremlin. What is important is that Europe and the US could face the fact that sanctions cannot be effective in dealing with Russia. Clinton also realizes that garbage-can rhetoric is not something that can advance American interests, not even her own as a candidate. She talks about winning but in a more legitimate way. America has every right to compete with Russia, but there is a difference between competition and hostility and derogatory speech. Now we see that the speech is somehow improving. We hope that the atmosphere will also gradually improve.

She also said that Russian President Vladimir Putin is not an easy man.

Well, he isn’t an easy man. And Hillary Clinton is not an easy woman. If she is elected they will have to deal with each other, and hopefully will change the atmosphere.

Let’s go on to comments now made by Ram ben Baraq, Director of the Office for Strategic Affairs. He attacked his American colleagues for not sharing information on negotiations with Iran. What are the relations now between Mossad and the US?

© AP Photo / Richard Drew
Trolling the Troll? White House Mocks Netanyahu on Twitter
The developments are fast in the Middle East. Things change quickly. There is a real change in Iranian policy and atmosphere in Iran, and it is going towards the US. Relations between US and Iran are becoming closer. And in case the sanctions will be eased we will see billions of dollars in the Iranian economy. But here we are talking about Israeli-American relations and the fact that US intelligence community refused to share any info on the negotiations is a challenge to the alliance between Mossad and US intelligence. This is a blow for the historic alliance. It shows that the Obama Administration is determined to spoil the relations with Israel without paying any heavy price. They think they will gain by becoming closer to Iran, while becoming more hostile with Israel. It is very strange. Some public polls are also showing that the atmosphere in the Democratic party is more and more estranged towards Israel.

Were you surprised a few days ago when Kerry said "America can walk away from these talks if they want"?

They try to keep themselves strong, nice and shiny towards their electorate. They don’t want to show that they are weak and they are making mistake by going into a deal with Iran. They show their might by making strong statements. However the info that is received in Israel is that Americans will do everything to get a deal with Iran and bring Iran into the US sphere of interest. Iran will become a client of the US and not a client of Russia.