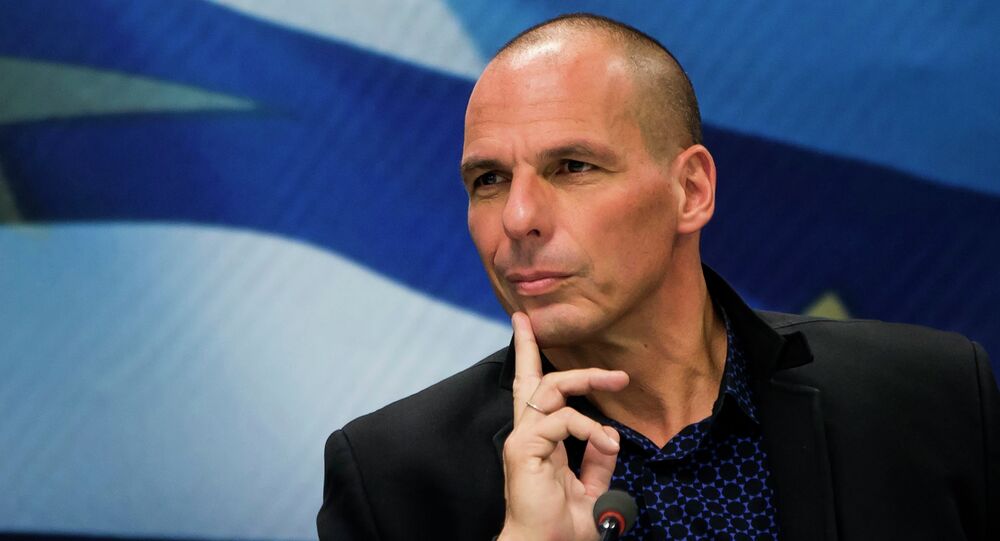 Greece’s chief negotiator, a renowned economist and an outstanding politician, Yanis Varoufakis announced a surprise resignation on Monday a day after the referendum, in which the Greeks said a resolute "No" to creditors’ ultimatum.

ATHENS (Sputnik), Gennady Melnik – He is replaced by Euclid Tsakalotos, Alternate Foreign Minister for International and Economic Relations, who had headed Greece's negotiation team in talks with the creditors.

"Soon after the announcement of the referendum results, I was made aware of a certain preference by some Eurogroup participants, and assorted ‘partners’, for my… ‘absence’ from its meetings; an idea that the Prime Minister judged to be potentially helpful to him in reaching an agreement. For this reason I am leaving the Ministry of Finance today," Varoufakis said in a statement titled "Minister No More!"

Varoufakis was like a red rag to the European finance ministers. He annoyed them by not hiding his thoughts. He openly criticized the Eurogroup, which, in his opinion, is only good for approving official documents and is unable to "forge" its own decisions.

© AFP 2021 / ANDREAS SOLARO
Greek Finance Minister Varoufakis Resigns: 'I Shall Wear Creditors' Loathing With Pride'
His first meeting with Eurogroup’s head Jeroen Dijsselbloem ended in an argument, when Dijsselbloem confronted his Greek counterpart with a dilemma — accept the memorandum or the program will collapse, which will involve a clear threat of banks’ closure.

In response, the Greek minister said at a joint press conference that the three officials representing the creditors would no longer call the shots in Greece. Back then, Varoufakis and Dijsselbloem even refused to share an elevator ride.

Two days before the referendum, a senior source in Greece’s Finance Ministry (clearly acting on Varoufakis’ orders) said that Dijsselbloem does not understand what the Eurogroup chairman’s role is all about and is constantly getting in an argument with the Greek minister instead of trying to overcome differences and reduce tensions. The Eurozone deserves a better chairman, the source said.

Shortly before that, Varoufakis said it will be possible to reach an agreement within 48 hours if the sides decide so.

Undoubtedly, Varoufakis’ resignation will help the negotiations move forward. It will help the European ministers to reach a sought-by-Greece compromise "with honor."

Certainly, this is a clear signal to the negotiations partners: "Greece stays in the euro area; it takes a step toward you and expects you to do the same."

© REUTERS / Dimitris Michalakis
Varoufakis Resignation is a Result of European Pressure – Greek Politician
With an open smile, laid-back demeanor, sharp answers, untucked shirt, a backpack and a motor bike, the 54-year-old Varoufakis became the icon of the new left-wing government.

He is an economist, a professor, a blogger, a polemicist and a crisis analyst.

His advent on the political scene fueled the even greater interest in Greece after a radical change in its politics. The new Greek finance minister was in stark contrast to his colleagues. Clearly, for them he was an outsider, as he flew to meet with them in economy class carrying a backpack.

Describing Varoufakis’ first meeting with British Chancellor of the Exchequer George Osborne, Guardian’s social correspondent noted that Osborne was wearing a custom-made suit and a tie, whereas the Greek Minister sported a bright blue untucked shirt, while his hands were in the pockets of a leather jacket. Parka is good for drug traffickers in Manchester of the 1990s or patrons of the pubs, but not for the participants in the state-level meetings, the reporter said.

As a matter of fact, all of that served to boost Varoufakis’ popularity. Dozens of journalists flocked to him upon spotting him in the streets. He became known as a "rock 'n' roll minister," "the pop star of the government," and a sex symbol. "All Greek women are in love with him," the German press wrote. The Thessaloniki bars started offering "Varou-funky" cocktails.

He was not afraid to enter into debates not only with the ministers. Several months ago, tavern patrons in Athens’ Exarchia district witnessed Varoufakis having an argument with dozens of anarchists — in fact, mere bullies — who demanded that he "leave the neighborhood."

"However, the anger of these people and their violent actions should not be a cause for brutal reprisals," Varoufakis then said.

© AFP 2021 / Louisa Gouliamaki
Varoufakis Resignation May Mean Greece Ready for New Proposals - German MP
A brilliant scholar and a professor of economics at the Athens University, an author of several books, Varoufakis was called to save the Greek economy from a deep financial, banking and economic crisis, where it was led by its respectable negotiations partners.

The son of a researcher, Varoufakis received excellent education. Renowned philologist Petros Moralis was among his teachers. He studied math and economics at the University of Essex and Birmingham upon recommendation by former Prime Minister Andreas Papandreou.

After graduation, he taught at Cambridge, Sydney and Glasgow universities, as well as at the University of Athens. Varoufakis was a visiting economist at the renowned Valve Corporation, where he was engaged in studies of the virtual economy, exchange rates and trade deficits. His interests included Bitcoin, the virtual currency, which he opposed.

Under him, the Finance Ministry and then the government refused to sign a settlement agreement with Siemens providing for paying 90 million euro (about $100 million) in damages for a loss of at least 2 billion euro following a corruption scandal. Moreover, the government has launched an investigation into bribes from Mercedes.

"We don’t believe that growth is all about the number of Porsche Cayennes on our roads," he said. After these words, the media began to look into how many luxury cars and when were imported into Greece.

Varoufakis did not hide his views on policies in the eurozone. His numerous articles and interviews in recent days have clearly influenced the public opinion not only in Greece but also in Europe. "Ninety percent of lenders to Greece went to the banks, including the German ones," Varoufakis wrote in a German newspaper.

"The euro zone moves in a mysterious way" he wrote in an Irish newspaper. "Momentous decisions are rubber-stamped by finance ministers who remain in the dark on the details, while unelected officials of mighty institutions are locked into one-sided negotiations with a solitary government-in-distress."

Varoufakis recognized the government’s mistakes during the talks: "We are not professionals in this area."

Varoufakis promised to resign if the Greeks say "yes" to lenders’ requirements during the referendum. However, he resigned after a clear victory — at the creditors’ request, not to interfere with the negotiations.

"This requirement by the creditors is an honor for me," Varoufakis said. In the English version, which his former colleagues from the Eurogroup will read, the statement sounds harsher: "I shall wear the creditors' loathing with pride."

Describing the actions of the Eurogroup and the international lenders, Varoufakis said that "there’s a name to what they are doing to Greece – it is terrorism."

Varoufakis’ plans are not known. Clearly, he won’t stay unemployed for long.

Varoufakis Resignation is a Result of European Pressure – Greek Politician