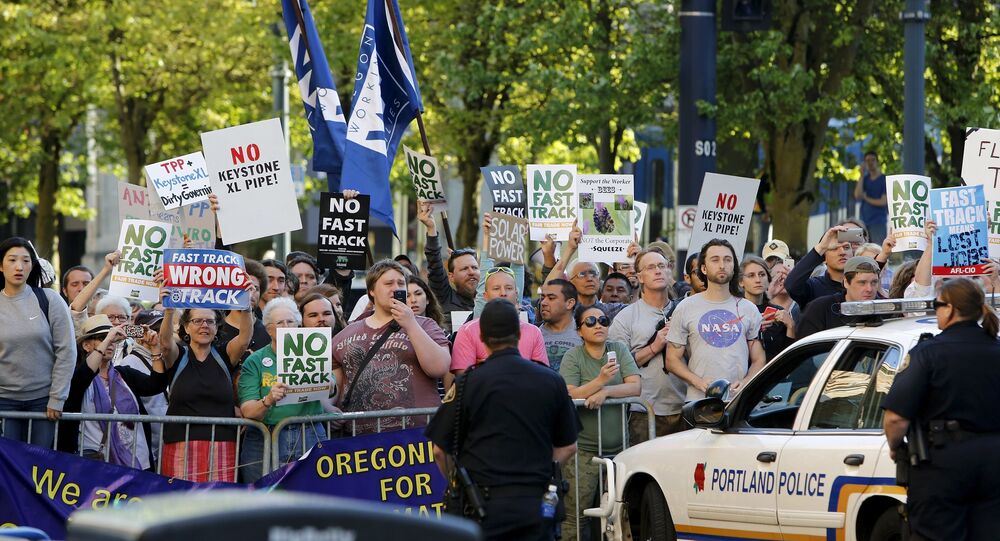 WASHINGTON (Sputnik) — The TPP is a trade pact currently being negotiated in unusual secrecy between the United States and 12 Asian and Pacific Rim nations. US pharmaceutical giants have contributed hundreds of thousands of dollars to US Senators who voted for the TPP legislation that passed last week, according to data from MapLight.

"When it comes to patented pharmaceuticals, the Americans want 37 years of patent protection," University of Kansas Law Professor Raj Bhala told Sputnik. "It [TPP] is not free trade, it’s managed trade… in the interest of well-connected, political and economic elite."

© Flickr / Andrew Albertson
Australian Parliament Slams TPP, Calls it an 'Attack on Internet Freedoms'
The US Trade Representative (USTR) governing body responsible for negotiation the controversial treaty, Bhala explained, is attempting to export US patent law, including a 12-year data exclusivity regulation, in addition to drug patent protections of up to 25 years, onto other TPP countries.

Competitors looking to make affordable generic versions of these potentially life-saving drugs would be prohibited from obtaining data from taxpayer-funded US federal drug trials until 12 years after a patent expires, Bhala stated, making it almost impossible to certify a generic alternative to sell in the United States until long after a particular drug's relevance to the marketplace has expired.

In the 20th century and earlier, Lincicome added, a 10 or even a 20-year patent could be legally acceptable because the pace of innovation was much slower.

"A cotton gin remained a cotton gin for 50 years," Lincicome explained. "[Today] software and drugs innovate so quickly that having a ten-year patent term basically means you have protection for the entire life of that product."

© AP Photo
WikiLeaks: EU Diplomat Interpreted US TPP as Hostile to China
On June 24, Japan's Economic and Fiscal Policy Minister Akira Amari said the parties involved with the TPP could reach a broad agreement by the end of July.

Proponents of the TPP treaty claim that it focuses on enhancing trade and investment among TPP partner countries to create innovation, economic growth and economic development.

Opponents to the deal point out the secrecy in negotiations, the urgency of the talks and revelations from leaked sections of the proposal, detailing extra-judicial legal systems that would supplant sovereign nation government legal processes.

US lawmakers opposed to the deal claim also that, beyond the extraordinary secrecy, the treaty lacks stringent labor standards, and will ship jobs overseas.