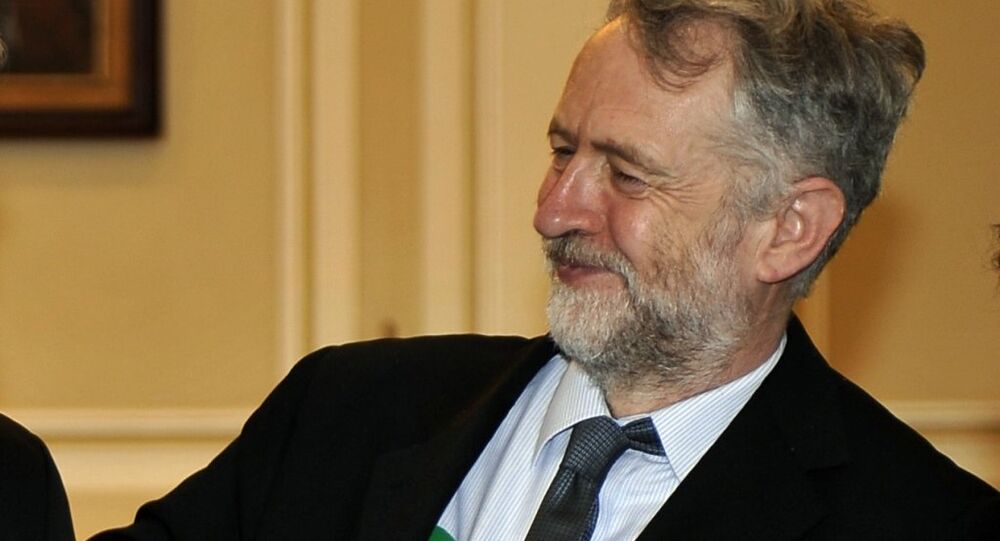 It didn't take them very long, did it? Almost as soon as it was announced that veteran anti-war socialist Labour MP Jeremy Corbyn had achieved the requisite number of nominations to make it on to the ballot in the Labour leadership contest, the attacks by Blairities, 'elite' media commentators, and pro-war faux-left gatekeepers began.

Julia Hartley-Brewer penned a piece entitled "Jeremy Corbyn is definitely not what the Labour voters want." Really, Julia? Corbyn came top, with 47%, in an online Labour leadership poll (of 1,912 people), on the popular Labour List website. Next best was Andy Burnham, with 13%, while Liz Kendall, the preferred candidate of the Blairites and the Murdoch press, got just 11%.

An Internet campaign, urging people to register as a Labour supporter for £3 so they can vote for Corbyn is gathering real momentum. A 'Jeremy Corbyn for Labour leader' Facebook page, had, at time of writing, 23,000 likes — Andy Burnham's has just 4,553. The evidence is that Labour voters — and voters generally — like Jeremy Corbyn quite a lot.

In the Daily Telegraph, uber-Blairite Dan Hodges claimed that Corbyn's success in making the ballot showed that "the lunatic wing of the Labour Party is still calling the shots."

Hodges piece was endorsed by fellow Blairite John McTernan, who described it as a "Brilliant attack on lunatic Labour self-indulgence — the Corbyn candidacy." Tony Blair's former speechwriter, Phillip Collins, a columnist with the Rupert Murdoch-owned newspaper The Times, also used Twitter to vent his frustration that Corbyn had acquired the requisite 35 nominations. "What are on earth are they thinking, adding Corbyn? What a dumb waste of time. Labour is becoming the stupid party."

Tony Blair's biographer — (some would say hagiographer), John Rentoul, was similarly aghast — and penned a piece for The Independent entitled "What is the point of Jeremy Corbyn running for Labour leader?" He also tweeted — "Corbyn's nomination means 25% of all time on Labour hustings is wasted. Not a serious party."

Tut, tut, Labour. You've allowed on to the ballot a man who members of the Tony Blair fan club most certainly do not approve of! That shows you are not a "serious" party!

In fact, Corbyn making it on to the ballot shows that Labour is serious about trying to regain the support of the millions of voters — like myself — who deserted them when Tony Blair came to the fore and ditched everything the party had once believed in. Jeremy Corbyn's politics have routinely been described as "extreme", "hard-line", "far-left" and even "lunatic" but in reality, his views on the most important issues of the day are more in tune with the public than the views of the rather pompous "inside the tent" media commentators, who are now denigrating him.

Take public ownership. Corbyn supports re-nationalization of the railways. An extreme position? Hardly — it's supported by around 70% of the electorate.

What is "extreme' is not nationalization, but support for a privatized rail network which has led to rail travelers in Britain having to pay by far and away the highest rail fares in Europe, as well as costing taxpayers much more in subsidies than when the railways were state-owned.

Then there's Corbyn's stance on international affairs. He strongly opposed the illegal Iraq war and other US-led military aggressions, (including the 2011 bombing of Libya), and is the Chair of Stop the War Coalition. His opposition to the elite doctrine of  "liberal interventionism" chimes with the views of the majority of Britons: in 2013 when the British government wanted us to go to war with Syria, Corbyn opposed it — only 11% of voters supported British involvement. Later Corbyn wrote:

"Historians will look at the British parliamentary vote on Syria in August 2013 as a very important turning point. For the first time anyone can remember, the British Parliament rejected a prime ministerial request for support for joint military action with the United States."

Many of those attacking Corbyn now did want us to bomb Syria in 2013 and did support the illegal Iraq war — which has destabilized the entire Middle East and led to the deaths of up to one million people. Again, who is the moderate, and who are the extremists?

On the economy, Corbyn opposes the policies of austerity, which clearly only benefit the very rich at the expense of the majority, who have seen their living standards fall since the financial crash of 2008.

We're told that Corbyn is some kind of left-wing dinosaur who wants to "take us back to the 1970s," but the fact is that the British economy performed much better in the three decades before neo-liberalism was introduced than it has done in the subsequent decades, as a new academic study confirms.

It's not "extreme" to want an end to neo-liberalism, its common sense, if you want the economy to start delivering the goods for the majority and not just a privileged few at the top who have had it all their own way since 1979.

The attacks on Corbyn and his candidature raise serious issues about the state of British democracy, and tell us plenty about how the parameters of "acceptable" debate have been narrowed in the neocon/neoliberal era.

The great "crime" of the MP for Islington North is not that he's an "extremist" — he clearly isn't — but that he is challenging the dominant elite orthodoxy, and presenting a popular alternative to the discredited policies of the past thirty-five years.

Genuine democrats are welcoming the fact that Corbyn has made it on to the Labour leadership ballot, but faux-democrats are angry that his socialist views will know have a wider public hearing.

The attacks on Corbyn have been many, but in essence what these establishment commentators are saying is this: it's outrageous that a man who doesn't support neo-conservatism or neo-liberalism and who is implacably opposed to imperialism and endless war is standing for the leadership of one of Britain's major parties.

Even if Corbyn doesn't win, (and the odds are against him), his candidacy will have the effect of pushing the other Labour candidates to adopt more "old" left positions on the economy and foreign policy. That's going to delight the public- but is clearly causing elite gatekeepers, who want all our major parties to be signing from the same pro-war, pro-privatisation hymn sheet, considerable concern.