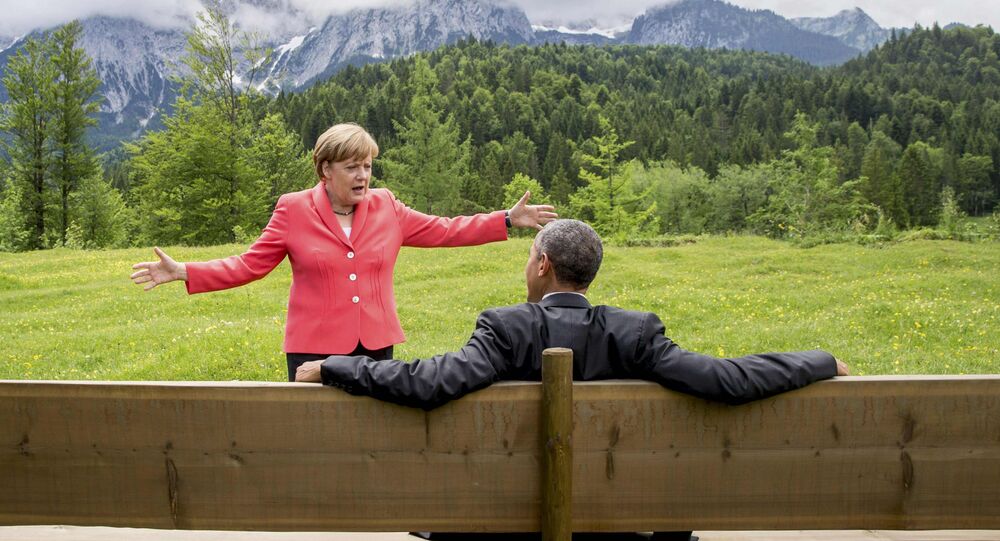 Speaking with Radio Sputnik, Israeli political analyst Avigdor Eskin noted that he couldn't help noticing that even though the Russian president was not invited to participate in the G7 Summit last week, the leaders of the group's seven member states could not stop talking about him all throughout the affair.

© REUTERS / Alexei Nikolsky/RIA Novosti/Kremlin
Putin's Visit to Italy Gives Worried Obama Food for Thought
"They wanted to ignore [Putin]" by not inviting him, "but instead they spent all their time discussing Russia, Putin, and the Soviet Union," Eskin noted, referring to US President Barack Obama's statement that the Russian president was "wrecking Russia to recreate the Soviet empire."

"I mean it was quite a strange, weird situation," the analyst commented. "They were trying to create some kind of boogieman out of Putin, saying that 'we'll just ignore him', and instead spent all their time discussing him. You see Putin once made a statement that the fall of the Soviet Union was a tragedy –and it was. You can be a [Russian] liberal or conservative or a communist; you can be anything, but you can see that the fall of the Soviet Union caused many human tragedies and deaths. One can say [the collapse] was inevitable, and one can say that the communist system was such that it couldn't be done any other way. There are many arguments [about it] but the fact is that this was a tragedy and Putin never said anything in terms of a need to revive an empire."

Eskin argued that Putin has proved over his 15 years in power that he is not interested in rebuilding the Soviet empire, absent Western hostility. In the expert's view, "this hostility from his opponents in the West may force him to start thinking about it…Because after 15 years we see that in the cases where Putin [acted] like [he did] in Georgia and in Ukraine, it was a response to certain aggressive actions taken against Russians. Russian peacekeeping forces were attacked in Georgia and Putin responded. Everyone can have their own opinion about whether he responded the right way or the wrong way, but this was not an attempt to recover the Soviet boundary. And the same with Ukraine."

© REUTERS / Fabrizio Bensch
Russia Doesn't Need Membership in 'Tragic Farce' of Contemporary G7 – Czech Politician
Commenting on recent analysis that the combined GDP of the BRICS countries may soon surpass that of the G7 and on the affect that this would have in the formation of a bipolar world, Eskin cautioned against overly confident estimations, noting that at present, both China and India are still dependent on the US market, and that neither seeking to damage their relations with the US. "Nevertheless, China and India are fed up with certain aspects of American policy," the expert added. "If the Americans try to go all the way with their sanctions policies, we will likely see the BRICS becoming a competitive bloc over the next years and decades," Eskin concluded.

Yatsenyuk Pits EU Against US Over Arms Deliveries to Ukraine