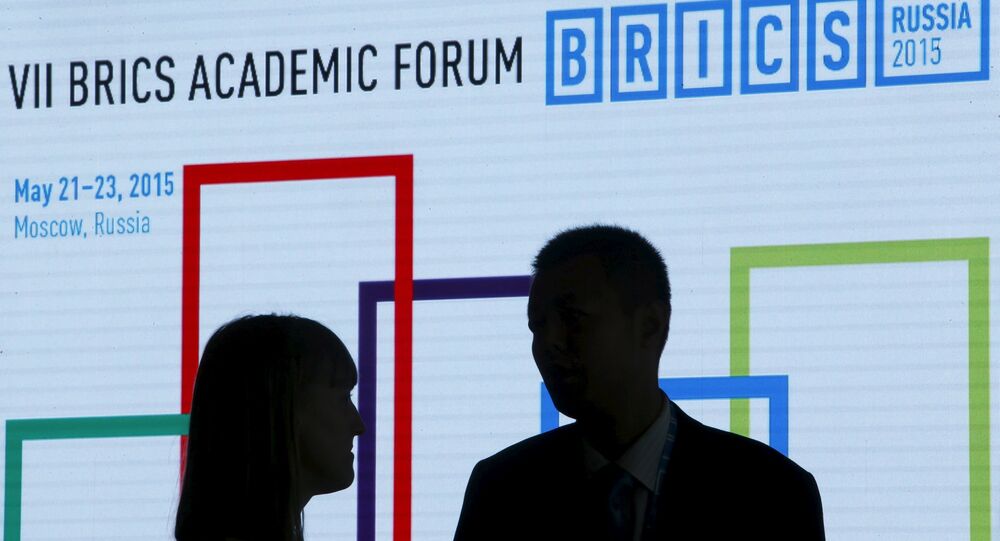 Former representative of Brazil and 10 other countries at the IMF Paulo Nogueira Batista, Jr. spoke to Sputnik in an exclusive interview about the prospects of the new BRICS New Development Bank (NDM).

The IMF risks falling behind as it continues to cling onto 20th century practices, former IMF representative for Brazil and now a Vice President of the new BRICS Bank Paulo Nogueira Batista, Jr. told Sputnik Brazil in an exclusive interview.

Batista will also moderate discussions at the upcoming July 9-10 summit of BRICS countries (Brazil, Russia, India, China and South Africa) in the Russian city of Ufa, where the bank vice-presidents will hold a meeting.

What is the significance of the BRICS Bank?

The development bank is created by BRICS countries as a new channel for financing infrastructure projects and sustainable development in developing countries.

As such, it is not strictly a BRICS countries' bank, as by its charter it is open for membership to other countries, including developed ones.

© REUTERS / Marko Djurica
Greece Explores BRICS Development Bank Membership - Deputy Defense Minister
Although loans will be given exclusively to developing countries, this should be seen as an open bank. It is founded by its charter for any UN member country from the beginning of its operation. Founding countries will share administrative functions and determine details regarding the conditions for accepting new members.

By accepting the offer to become one of the Vice Presidents of the Development Bank, you will have to resign from the IMF, where you represent Brazil and ten other countries. How do you evaluate this period of your work?

I worked at the IMF for over eight years. I joined in April 2007 and myself did not expect to last so long. In general, it was a good experience.

In part, because of the international financial crisis which began in developed countries, the US and Europe, in 2008, it made work at the IMF much more interesting than before. The Fund was at the center of the crisis, of working with the crisis, and this is a very valuable experience.

But it wasn't easy either. In Washington, momentum, resisting change, is very strong. In this sense, the crisis even helped. It shook established norms, the confidence of Americans and Europeans who had a lot of influence here. For some time this helped, allowed us to change some things. But then there was disappointment. Disappointment in the lack of progress in the reform of IMF governance.

It is no accident, although BRICS countries value the IMF and World Bank, they justly take on the work of creating new institutions — a new Development Bank, Reserve Currency Fund and the Chinese-created Asian investment bank.

None of this would have happened, at least in such a scale, if the Bretton-Woods institutions, the IMF and World Bank, demonstrated greater adaptivity to 21st century realities.

© Sputnik
West Pulls Out $3.5 Trillion From BRICS to Pressure the Group - Official
And as the IMF and World Bank "cling" to the 20th century, they increasingly risk to fall behind real events. But this is only one side of the issue. The other very important side is that the new institutions created by BRICS countries are not created against someone. Quite the opposite, they are open to cooperating and even joint action with other organizations if it represents their interests.

You have repeatedly stressed China's important role. As has been said, the headquarters of the new Development Bank will be in Shanghai. the Asian Bank is also based in China. Can this lead to a conclusion that China will become the 21st century' main economic engine?

I would formulate it a bit differently, but without a doubt, China today together with India demonstrates the most active growth. By population, economic volume and geography this country has the greatest weight in the Asian region, other than the US.

As such, China is the biggest economic and political power within the scope of the BRICS bloc and naturally has the most "firepower" financially.

It is enough to recall their own AIIB bank, the charter capital of which is equal to ours. This is the only BRICS country capable of simultaneously conducting several initiatives of this scale.